I figure after a year and a half (probably longer) of debating LSU's offense it's probably considered a "hot button" topic. I mean, after all, I think we're all convinced that our defense could stop the Saints if we played tomorrow, but we probably couldn't score on even a hapless 1A high school if we needed to. To put it mildly, LSU's offense is upsetting... at best.

Yet, even still in the face of all this frustration, I still see wildly inaccurate comments bandied about on a routine basis. Not by any of the fine posters here at ATVS. No, you are all that is good and pure and holy and wise. So I brainstormed (which consists of me rolling over the morning, scent of bourbon thick on breath, empty beer cans under my pillow, a deep haze of the yesterevening hovering over me when an idea that is appallingly stupid comes to me and I decide to pursue it anyways). Shortly thereafter I discover that strange woman lying next to me is, in fact, my wife. It is always my wife.

Regardless, here's the idea. Each week I'll take a look at a few plays from previous game (some good, some bad) and talk a little bit about the strategy and formations we are using. I'm not a coach, nor an expert, so please feel free to brand me an idiot. But let's go inside the plays and see what the "Wizard" (didn't people used to call him that?) dialed up for this week. See the plays after the jump.

Alright, there's a lot of misnomers about Crowton and Jordan Jefferson. I'm not the biggest Crowton fan, but that doesn't mean he doesn't do certain things very well. GC is excellent at designing plays. He's also better than just about anyone I've seen at setting up a defense with one play and coming back to it, but hitting them with something else. When you see it unfold, it's a beautiful thing. He's not afraid to run the same play multiple times (we ran the same play back-to-back in this game and another player three or four times).

Now, the bad part is, he does a little bit too much mixing and matching with formations and personnel groupings. On a given night, I've seen us trot out 15-20 different formations. Sometimes the variations are slight, but that's just outrageous. Look at what a lot of the best offensive teams do. The Colts (I know, spare me the "This ain't the NFL" garbage) run a very basic 3 Wide, Single back package with a TE. They operate basically the entirety of their offense out of this and 4 WR sets (which is usually just Dallas Clark split wide). It's really... fairly simple.

Regardless, here's a basic rundown of what happened:

-55 Total plays, 39 runs, 16 passes
-3 drops (including 2 TDs if you count TT's fade as a drop)
-1 batted down screen pass that would have resulted in a TD
-A pretty healthy blend of run/pass scenarios. I.e. we didn't run, run, pass every series. We didn't run on every down and short. We didn't throw on every down and long etc. etc. etc.
-I've been saying this all week, but JJ really looked like he operated the offense rather than played within it. What I mean is, he ran checks, he audibled into and out of formations that weren't good. He went through his route tree and threw to his checkdowns (on multiple occasions... MSU was determined to not get beat deep). All in all, he played well, I don't care if the stat sheet doesn't back it up.
-JJ still has progress to make. He did a fine job Saturday, but he also needs to be more accurate (I don't mean this in the actually complete passes variety). I'd love to see him throwing guys open. A really good QB will throw a WR open. That's a step he needs to make.
-Our offensive line is so much better at zone blocking rather than man blocking; it's not even funny. I can remember one play from the game where we ran a zone block scheme and it was stuffed... and even then it still went for 2 yards. Conversely, we only ran two good man blocking scheme plays all night (one of them JJ audibled into, the other was the next play for a TD).

Anyways, enough of all that, here are the plays. Please excuse my shoddy craftsmanship. If any of you know a good (FREE!) play diagramming software I can use, that would be great. Until then, MS Paint will get this bitch done. 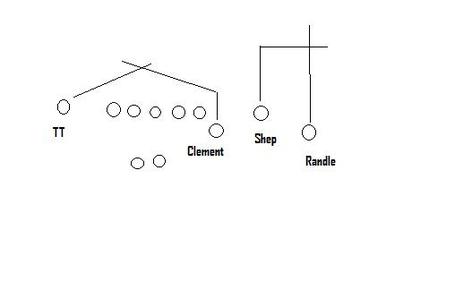 This is the play that killed our 1st drive. Sadly, the play was there, but there was a mistake by Clement that killed it. Shep ran a short out (even if it looks deep on my illustration), Randle ran a fly pattern. Toliver ran a slant across the middle that sadly would have easily been a 1st (he was wide open and on pace to be about 5-7 yards deep). As he's progressing in his route, Clement runs directly across his face, TT is forced to stutter step, then cut underneath Clement, JJ throws him the ball, but he is shortly tackled for a 2-3 yard gain. Drive Over. 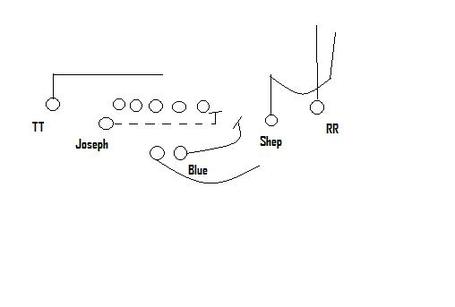 This is the type of play I don't understand why we haven't seen more of (particularly last year when the line was such a liability). We roll Jefferson out to get him on the edge, giving him three easy targets to throw to. Toliver is running an in about five yards deep. The horribly illustrated route for Shep is a an out and up. Randle runs a fly pattern again. Randle's deep route vacates a nice space in the defense for Shep to be open. Blue seals the edge with a block to give JJ time to throw. He hits Shep awkwardly, but for a nice 21 yard gain. I can't tell if the throw was off target and Shep had to adjust or if he just stumbled catching it. Either way, it would have only gone for 3-4 more yards since defenders were closing in on him. But this is a nice, easy throw that gives JJ three different levels to throw to and only half the field to read. 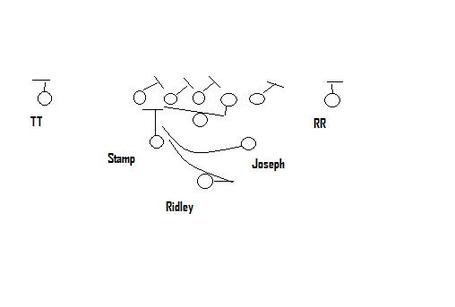 Flexbone is the nearest comparison I could find to this formation, which was something like a Flexbone/Wing T hybrid. Interesting indeed. The play was a simple trap/misdirection play that went for about 4 yards, but it was well executed and looked nice. We came back to it later on and the pulling guard (T-Bob) missed his block and Ridley tried to cutback and ended up going for a loss. Ridley takes a jab step to the right, takes the handoff and follows Stampley, Joseph AND Williford into the hole. Classic power running. 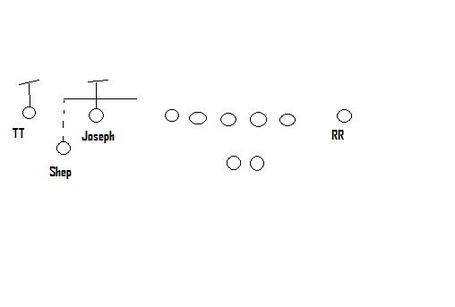 This was the failed screen pass that killed our 2nd drive. It's really unfortunate because the play was well designed, and for the most part, well executed. The MSU DL made an athletic play jumping up to knock the ball down, but he shouldn't have even had a chance. JJ was right to throw it lower and harder (floating screen passes always end up in disaster). The two pulling lineman (Josh D. and PJ) were up the field and ready to pick up any trash in Shep's way. Unfortunately, Barksdale didn't do a good enough job of blocking up his man (the guy who knocked the ball down) and the play ended as an incomplete rather than a TD. This is one of those things that makes you groan, because if the play works, it's 10-0 LSU and a ton less grumbling from our fanbase. *Sigh* 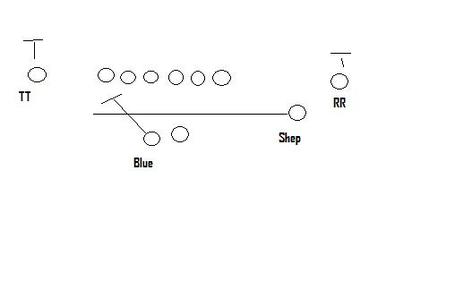 ZONE BLOCKING! I love this play. Straight from the UF playbook, this is the classic Jet sweep play Meyer would run with Percy Harvin with great success. First, Jefferson motions Joseph over from the right side of the formation to the left. Next, he sends Shep in motion from right to left before taking the snap and sticking it in his belly. The OL straight up zone blocks (student body left), Blue acts a lead blocker and Shep rips it for a nice 10 yard gain. Good call, good execution. 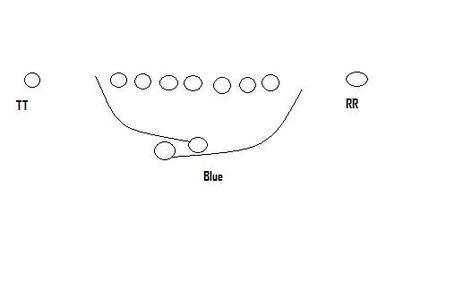 One trend I noticed is that every time we got to the redzone, we immediately got into two TE formations. We ran it both under center and from shotgun, but like clockwork, two TE time inside the 20. I can't argue much, as we had some good success out of the formation and we didn't run it as a run-only type of thing.

The play above is our first TD. Once again... ZONE BLOCKING. This is bread and butter Rich Rodriguez offense right here, with an easy zone read play. JJ is reading the backside end. If he crashes hard, JJ keeps the rock and runs it; if he holds contain, JJ gives it to the RB (in this case Blue). The end crashed hard, JJ carried out the fake beautifully and some nice blocking down field gets him in the end zone for 16 yards. There's been a lot of crowing about JJ running the option, and I agree, he does not run the classic option with any sort of effectiveness. BUT, I've seen him run this on a few occasions, and it seems to always turn out pretty well. I'd LOVE to see Shep give it a go.

Overall, after re-watching and diagramming every play, I liked what I saw. I thought the playcalling was fine. GC wants to stretch the field vertically and horizontally (much like Meyer), which is why we continue to see JJ running the option. So even if that goes for no gain, know that it is serving some purpose (not every play needs to gain yards to be effective - Crazy I know!). MSU was determined not to yield the deep ball and did so successfully. So instead, we kept the ball, played keep away and wore their defense down. I would have loved to seen more points, but of the four drives that sputtered in the 1st half, I didn't think one of them was JJ's fault (I still think TT could catch that fade).

Let's hope we can build off of the strong efforts of this game.