Share All sharing options for: Thoughts From The South Endzone - LSU v WVU

Usually, my game thoughts are accompanied by some game photos I took. However, sometime during the tailgate I put my camera back in my truck for fear of rain damage. I never went back to get it, so the selection is pretty slim. 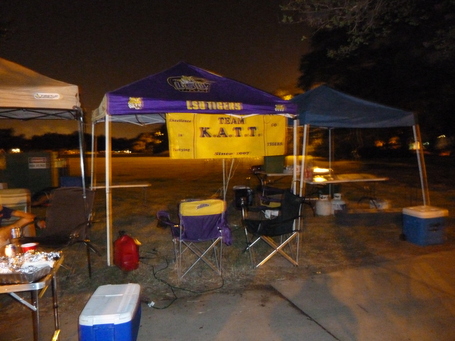 Approximately 1 am Friday night, and somewhere around the 3rd game of flip cup.

This weekend started off as much more than a game for me and the Team KATT crew. Our Semi-annual All-Night Tailgate got rolling about 10pm and went until about 3 am before we did some power napping in our chairs. I had a good time talking football with a few WVU students who came to campus early. It's mostly a blur, but I do remember them both being not too fond of Bill Stewart's folksy brand of coaching. At one point, one of them posited that Pat White was the only QB in the history of College Football to start and win in 4 bowl games. They won the argument by default, as there was no way to do the research at the time.

Things got cranking again around 7am and I have to say I was disappointed at the lack of WVU turnout on campus. I've heard many tell me after the fact that a lot of them stayed in NOLA and were bussed up much later in the afternoon, which is disappointing. It's not really a bad decision, but it is a very touristy thing to do. They did show up in droves later on and I saw many large packs of them as I made my way to the hill for the band. Ran into quite a few of you readers at the tailgate and on my way around campus, though I sadly have no recollection of any of your names.

It had rained very hard for a few minutes in the early afternoon so I, like many of you no doubt, spent a few minutes trying to dry the puddle from my seat. I was glad to see the student section fill to capacity very early and was mildly pleased at how warm ups went. For those wondering, yes the band was purposely not playing "owieo" this week as the annual "How dare our student section be an unruly mob and say such vile things to our visitors!"  slap fight between the students and administrators flared up after only one game of "You Suck!" chants.

Allow me a moment to put on the indignant student hat and say that it seems a bit two-faced to hear the admins get flustered over "You Suck" while playing "All I Do is Win" loud enough to be heard on the moon in warmups. Even the radio edit of that song is racier than anything I've heard from the North Endzone in a few years. And I like that that song is now a "Neck" surrogate during pregame. Nicely done.

And now for the curmudgeon bit. To all the bros and pledges who thought it was wicked sick to do the beach balls in the stands bit for the second week in a row. It was only mildly amusing the first time. Now it's flat out annoying, especially when you do it at the beginning of WVU's first drive in the second half and essentially take half the crowd out of it for that score. All I'm saying is your timing could be better, brah.

As for the game itself, let me say that the extra hours only made the mob more jumpy. Grumbling nearly from the 1st play on O and flat out booing on the INT, it never got any better when we had the ball. I've seen conflicting comments that the more animated disapprovers called out either Crowton or JJ by name, and all I can say Is that I had both in my section. At one point in the 3rd they began arguing with each other, nearly to the point where they might have needed to be separated. However after J Lee's failed drive, they put aside their differences and decided that both sucked equally. It would be hilarious if it weren't so damn sad.

With the Bad comes the Good though. Miles earned some genuine appreciation for going for it on 4th down and both ends got jet engine loud when the D was holding WVU deep in their own territory. The cheers for PP's Heisman pose were so loud and prolonged, most of us never even heard the penalty call.

Despite reports I've heard from the ESPN broadcast, I didn't really notice the crowd thinning until about 3 minutes to go in the 4th, helped no doubt by the fact that it was still a close game. Mass exodus occurred right after our final defensive stop.

More of the same. Same feeling of Pregame tempo problems and false stops. Even the same short show but reversed this week so we got to see formation problems from the other direction. And the influx of piped in music during games is reaching unacceptable levels.

Major Kudos to WVU who brought a full squad and was nice enough to do Country Roads in person. I wasn't the only one in LSU gear clapping along with our Big East brothers on that one. As soon as my section stopped giggling at the male baton twirler, we all admitted that the visitors may have put on a better show.

I never like day games, 2:30 especially, but it's the hand we are dealt for such an awesome tailgating season so far. Unfortunately the yardstick has been set. UAB torched the Vols for somewhere over 400 yds through the air last week and only lost because they have a CUSA kicker. Cholly Mac help us if we can't do half that this weekend as play time is officially over. Bama had a scare but remains the team to beat, FL may have found Tebow 2.0, Cam Newton is looking great at Auburn even behind that weakened line. 5-0 is more than possible, and with that 7 wins are in the bag. But 4 more serious opponents (and the possibility of an off-the-meds Houston Nutt career suicide squad) make me more than worried about the future. September was not nearly the test we thought it was going to be in the preseason. Lets hope we can make it through October.