Is it just me or is Louisiana a hotbed for defensive backs? It seems like every year a handful of top notch defensive back prospects (most of which end up at LSU) emerge. For the past several seasons names like Corey Webster, Jonathan Zenon, Randall Gay, LaRon Landry, Kevin Steltz, ,Chad Jones... the list goes on and on and on... have kept the Bengal Tiger secondary among the elite groups in the country. Whether coaches by Saban, Pelini or Chavis, each group pushed forth a dominant unit. Can anyone remember the last time we had a truly bad pass defense (when we had an actual DC)? I mean the last time we truly could not cover (watch USC/Hawaii from last night if you want to see guys that cannot cover). It's been a long... long time.

Scroll through the list of 2010 LSU commitments and this year looks no differently. In fact, this year seems only a shining example considering that three true freshmen will enter tomorrow's game as members of the two deep: Tyrann Mathieu, Eric Reid and Ronnie Vinson. I have written about Mathieu and Reid previously, so why not give Vinson his due? 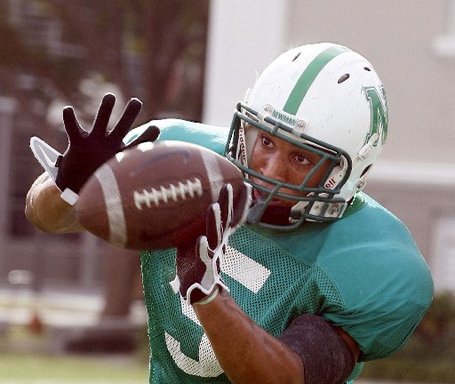 via hssn-media.advance.net
Vinson's future is at safety for LSU, but don't be surprised if he emerges as a KR threat sooner than later.

Believe it or not, despite Vinson's early commitment, he was not always a mortal lock for LSU. Reports from his camp state he was very interested in USC, but in the end, the distance factor was too overwhelming to overcome. And it appears Vinson made the right decision, considering he'll be in line for playing time in 2010.

A reasonable amount of speculation regarding Vinson's future position swirled around Vinson before he stepped on campus. Vinson was an explosive offensive player in HS, but also excelled as a corner and safety on defense. Where would LSU use him? Most suspected he would be in line to play safety, but others pontificated on his potential as a speedy slot receiver/scat back. Ultimately, Vinson ended up as a safety and judging by his role as back-up to Brandon Taylor, the LSU coaching staff made the right decision.

Vinson is a player with good speed and tremendous explosion. He's a natural athlete who, to put it plainly, just looks like a football player. Stupidest evaluation ever, right? But you get my point. You see him on the field, and you can just tell he belongs and he knows what he's doing.

There's a lot of things to love about Vinson's game. Obviously his speed. He's well put together at 5'11, 187. He's as quick as he is fast, which is very important for a defensive back. I love the way he will stick his nose in there and make a tough tackle. He doesn't back down from a running back and doesn't go for the shoe string tackle. No, Vinson hits squarely and with good form and gets his man down. That's a feat. Coverage wise, he appears to have all the ability to make plays. He's got sticky hands from his offensive days. He will need to make a transition to playing safety full-time, but sitting behind Junior Brandon Taylor should allow him plenty of time to watch and learn.

Vinson is an exciting player. Much like Eric Reid, he flashes the ability to be equally adept in both run support and coverage. Those are rare commodities. Turn on the tape and check out all his huge offensive plays, and you'll understand what type of explosive play maker this kid can be.

High End: Vinson will not assume a starting role until 2012 (barring injury). By then he will be an experienced Junior who will have copious playing experience dating back to his Freshman season. I fully expect Vinson to be a play maker in the secondary. Nothing about his game suggests he'll merely be an "adequate" starter. He plays the game like he loves it, and that's often a distinguishing feature for guys that truly emerge as stars. Expect him to play this season and be a force on STs and maybe in certain situations defensively. Expect him to be a ball-hawking safety that captains the defense with his mental and physical skills.

Low End: At worst, I can see Vinson emerging as a KR/PR option and solid starter at safety. He doesn't strike me as a high boom/bust type of player, but one who will be exceptionally solid at absolute worst.

Realistic: As I mentioned above, he will start in 2012 barring injuries. I see him getting a shot at return duties as early as next year, due to his tremendous aggressiveness and explosion. As a safety starter, I think he will be a ball-hawking safety who makes the occasional big play for future LSU defenses.