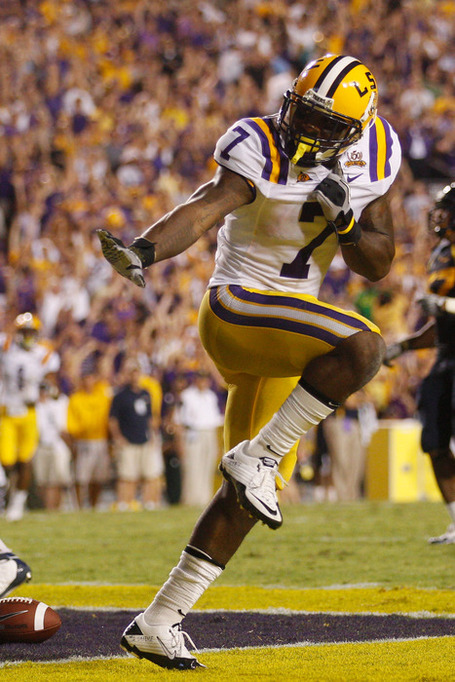 As if any other photo belongs up here

Fan vote for the Heisman. Zod commands it! (and Zod is destroying it.)

Apologies for not posting this earlier this week, but for the first time in a while, it's Tennessee Week. For more Vols coverage from one of the best blogs in the SEC, head on over to Rocky Top Talk, a Vol blog of great tradition (TRADITION!)

We stand at 5th in the SEC Power Poll and 12th in the BlogPoll. The resident BCS guru puts us at 8 and believes we are the border between the cans and cannots of the Title game contenders.

Time for some serious baseball talk. Practice began last Sunday and Kendall Rodgers at Yahoo Sports has been talking to CPM for a piece on the new bat situation that was going to run this week. The cliff notes we got were that CPM doesn't like the bats, we've had scrimmages with no extra base hits, he's still working on the starting rotation, and that Tyler Jones is impressing early. I said "was gong to run" because the College baseball world is still in shock that the first official victim of Cal's budget crisis is their 2-time national champion baseball team, which has been playing since 1892. This was a team that made Regionals last year. Rodgers wants to put the blame on the BCS, but really this is sadly Cal's own fault. Thank Bertman that our programs are self sufficient. I can't imagine how nervous it must be to be a baseball fan at any of the other UC institutions this week.

The Chief is not worried about utterly destroying his Alma Mater.

SEC Officials have yet to completely blow multiple important calls in the same game have a major gaffe this season. Well good for you, Penn Wagers and crew.

You mention a guy once and it all goes to pot against Brown. Sorry Andrew Hatch.

How many cops does it take to help archeology students defend the Indian Mounds from drunk tailgaters? I'm betting the answer is more than none.

Guess What? Traffic is gonna suck this weekend too! Why don't you try to avoid it by STAYING FOR THE WHOLE FREAKIN' GAME!?

Your finalists for the next mascot of the Fightin' Calamari: Bear, Land Shark, and the Hotty Toddy muppets. Who needs jokes when reality is so much better.

Well, that'll about do it for UNC football. It was a nice run.

Some notes of local interest: the former LHSAA commissioner may have embezzled over $400,000 while in charge and tensions continue to mount over the LSU budget.

After the break, a fan of the site investigates the Swag Factory.