When you watch a game in real time, sometimes its hard to get a feel for what's going on. If you are like me, you spend half your time drowning in bourbon and the other half the time pondering how LSU is somehow about to lose a game they are already up by 45 or something. I'm certain that following LSU is horrendous for my health.

Not sure if any of you watched last night, but the second part of Ken Burns "The Tenth Inning" documentary about baseball, specifically the last decade (it was the latest edition to his fabulous series about baseball) ran. Anyway, this long time Red Sox beat writer told the story of the 2003 ALCS when Aaron Boone hit the homerun in the 11th inning of Game 7 to send the Yankees to the World Series. He was watching the game with his sons, who were 11 and 6 (I'm telling this from memory so give me a break if the details aren't perfect). He said after the homer he just hung his head thinking... "Again?" Before long his 11-year-old tugged on his shirt and said, "Dad I think you need to take care of Bobby" (I don't remember the 5-year-old's name). He looked down and saw his 5-year-old son bawling on the floor. At that moment he said, "Oh my... what have I done?"

Now, I'm not a father, and at this point in my life I hope to never have kids. They are great for others, but the moment really hit home with me. My wife is an adopted LSU fan. And I really realized that anyone I bring the joy of LSU football to... I also bring the misery of LSU football to. That's basically a long winded way of saying that it doesn't matter to me if we're 13-0 or 0-12, I will not boo, and I will not stop being a fan.

But who am I kidding, you didn't come here to read me waxing poetic about LSU fandom. This is meant to be a discussion about a handful of LSU's plays from Saturday, so let's take a look.

Overall, I think I'm getting a better feel for what Crowton is trying to accomplish each week (yes, believe it or not, I still believe he's actually trying to accomplish something). I mentioned briefly last week, our use of the option play. Watching JJ try to run it has been horrendous in the past, but he actually ran it quite well this week. Regardless, this is more about intentions that outcomes. The reason for the options runs is to spread the defense out. Part of any spread offensive coordinators line of thinking is to stretch the field vertically and horizontally. That's the basic idea. You want the defense to be forced to defend the entire field. Thus the reason the Percy Harvin jet sweep was such a integral part to Florida's offense (and thus the reason they weren't nearly as effective last season).

Now, I know everyone (including myself) hates when we run it. But it's just best to remember that it is accomplishing something. Miles said as much. So even when you see that play go for 1 yard... remember it's the intention, not the outcome. What I'm saying is that I see Gary trying to set up our later-game middle pounding by forcing the linebackers to space wider and safeties to shade a yard or two further outside by running it wide. He's trying to maximize our bang for our buck there. Now, why we don't do the reverse (get the LBs to clog to set up outside runs)... I'm not sure.

There was an impetus on play-action passing this game. On my first couple of watches I couldn't help but believe the game was totally mismanaged. After the third watch I felt a little better. JJ is taking the brunt of the criticism, but there were probably 8-10 plays that were entirely not on him, many of them ended up being drive killers. Overall, our offense as a whole (other than Stevan Ridley) performed at a very low level. That must get better. 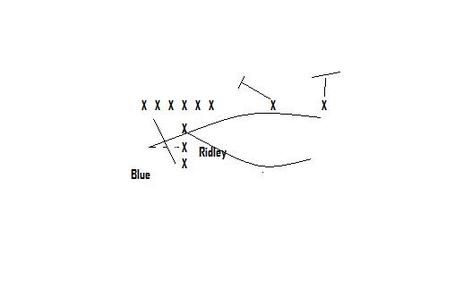 We experimented a bit with Ridley at FB in this game (like his TD run), and I like the idea. This play is the type of creative, simple design that is easy for JJ to execute and can deliver a good play. Ridley motioned slightly left out of the traditional I. This causes the LBers to shift to the strong side of the formation. We ran a play action fake to Blue while booting JJ off of it. Ridley, rather than coming forward like a tradition dive play (which was how it was blocked) came back across the formation into the flats. JJ rolled with him for an easy dump off. The LBers were caught in the trash after shifting over and the WRs did a good job of blocking up the guys in the secondary. JJ got it to Ridley and let him do the work... ended up in an 18-yard gain. Good Gary. 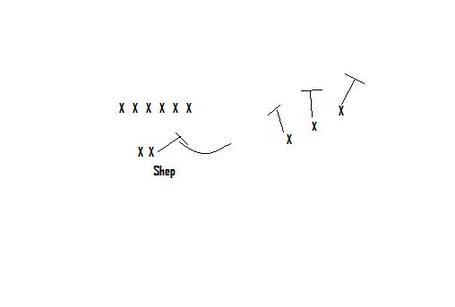 We ran a good bit of Trips in this game, with the receivers stacked as I depicted above. The above play ended up going for a six-yard loss, but I liked the idea. The execution left something to be desired. It's more or less a screen pass without the traditional screen style blocking. Shep remained in the backfield, imitating a guy picking up the blitzing linebacker. He chipped him and then rolled off, freeing himself up to catch a pass while the backer continued on to JJ. The angle makes it tough to see, but I think JJ gunned it a bit too hard. Shep was wide open obviously, so no reason for a hard throw... Jefferson needs to learn touch in these situation. But Shep didn't aid the cause by bobbling the ball and then losing his balance... he ended up stumbling to a six-yard loss. If he could have had a chance to get the ball in space and with good balance, it may have allowed for him to do his thing in the open field... alas, it turned ugly. 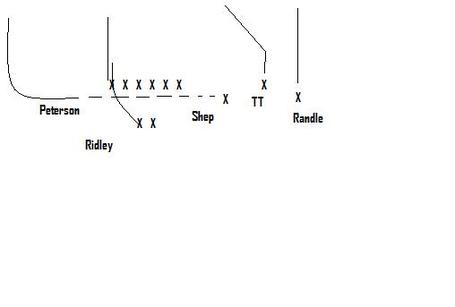 This is one of those times I want to strangle Gary. I LOVE this play... in concept. But why did we run it when we did? As a refresher, we ran this play in the 4th quarter with roughly 9 minutes to go in the game, fresh off another incomplete pass. Why, with a six-point lead, did we think it would be a good time to try and iron out some kinks in the passing game? Milk the damn clock, Gary. Even the color commentator was saying it. Instead, we run three straight passes, waste about 15 seconds of clock and punt. This is following three consecutive run plays, which amounted in a first down. Mind blowing.

All that said, I like the play itself. We motioned Shep across the formation out of Trips and put him back and left of the offensive line, often where we'll line up TEs. JJ play actions to Ridley who then settles into an open zone in the middle of the defense about five yards deep. Toliver runs a skinny post, and Randle runs a go. Shep runs a nice wheel route and ends up nicely fit between the underneath linebacker and the over the top corner in the zone. All JJ had to do was lay the ball in there (this is a throw he's made a thousand times in practice). He short armed it. Shep tried to stop and come back to it, but the throw was pitiful. Incomplete. Bad Gary. 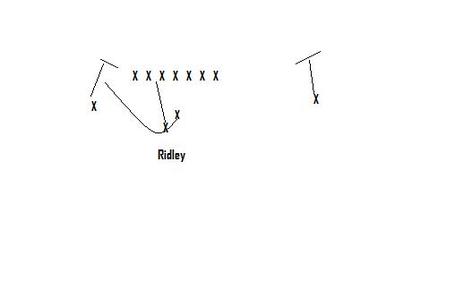 These final two plays are from the Jarrett Lee series. I include them both not necessarily because they were great or poor plays, but more to highlight how poorly Jarrett played (from my eye, which may not mean much). I'm not trying to pick on the kid, but with everyone calling for him to get a shot, after I rewatched his series about six times, I think I'm beginning to see why he doesn't get one.

This play was a super-simple zone/read option that JJ ran last weekend for a TD. On the play, the QB's decision is based entirely off the backside end. If the end crashes hard, the QB keeps and takes it outside. If the end plays contain, the QB sticks the ball in the back's guy and let's him take it. On this play, the end crashed hard, but Lee gave it to Ridley anyway. It went for about two yards. Now, perhaps the staff instructed him to fully give, but Lee still did "carry out" the fake by running around to the giant hole vacated by the defender crashing. Lee isn't much for running, but Peyton Manning could have gotten 7 yards on this play. It was a poor decision (again, if he wasn't specifically told to just hand it off). Regardless, why are we even running a play like that with Lee? Not his strong suit... 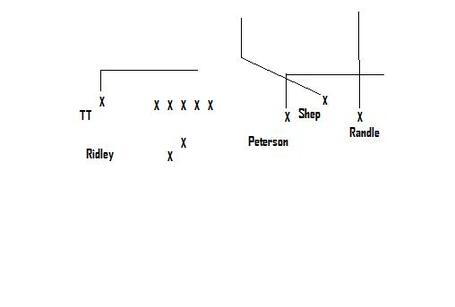 This was Lee's 4th (and final) play, right after he previously completed what looked to be a first down, which was called back by holding. We ran this formation a good deal throughout the night, and it's basically a modified pistol look. DLO ran a simple out route, Shep ran a slant and go, Randle ran a fly pattern and TT ran the drag on the backside. The play design is fine. You hope DLO is available based off the space vacated by Randle going deep. The linebackers in the middle should get sucked into the slant and go, leaving Toliver as a nice checkdown for a short gain.

Well, that's basically what happened, with Toliver picking up five yards. Unfortunately, we needed 10. Even more unfortunately, Lee had at least three more seconds in the pocket, because the line absolutely did their job. He gave up on the developing routes, got anxious AND threw it behind TT. All in all, it was ugly. The color commentator mentioned that JJ did the same thing earlier in the night... and he's right, he did. This is a major problem. For the most part, our line is providing outstanding protection. The QBs have to trust their pocket, stand in there and make strong throws. Neither of them did so, and it's costing the offense dearly.

All in all, I thought Lee looked rough in his one series. Now, it's one series and Lee is a rhythm passer. Once he gets hot, he's rolling. It's impossible to judge a person off four plays. I'm sure Drew Brees has had a four-play stretch where he looked like Ryan Leaf. It happens. But this is also a reminder that there is a reason Jarrett Lee is Jordan Jefferson's backup.