Today's plans in a minute, but first the News

LBs Quan Sturdivant and Bruce Carter have been cleared to play, reducing the hold-out number to 13. Marvin Austin has been subpoenaed by the state of NC because they intend to prosecute based on their law against illegal agent activity. How do you feel about that Butch? 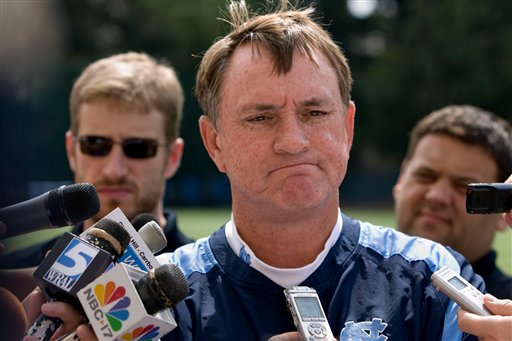 That's what I thought.

Meanwhile, a Georgia radio host reports that LSU has offered a scholly to former Georgia QB Zach Mettnberger who is currently toiling away in 1-AA. "Former" is putting it lightly, he was dismissed after pleading guilty to two counts of sexual battery. His sentence was light probation which hilariously included being "banished from the city of Valdosta, GA." I don't know how kosher it is to make a sexual battery joke, but if we don't do it first, I'm sure the Rebs won't hesitate, plus I've been looking for a reason to post this video all week.

Here's the plan for today. This is the pregame thread for discussion of the morning and early evening action. If you are looking for something to watch, SB Nation has a run down of the national highlights, and TSK has your SEC slate.

The Gamethread will show up about an hour before kickoff, and most of the ATVS crew will be checking in as we are all going to be home for this one. There will also be an immediate postgame open thread, followed by analysis from all of us.

Remember that this website supports commenting from most modern phones, so if you are in ATL, be sure to chime in.