Share All sharing options for: Some Thoughts On Kragthorpe 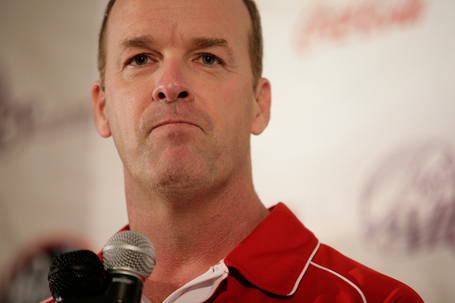 First of all, it shouldn't come as a surprise that Les Miles is going to do things his way. Whether you like it or not, Les is going to make what he feels is the best decision and will not feel pressured by the often clamorous voices of the media/fanbase/message boards to make a decision. After Miles elected to spurn Michigan and stay at LSU, he delivered a self-assured press conference that I think genuinely excited a majority of the fanbase. For the (maybe) first time, it really seemed like Miles felt confident that this was his job... his program...

Days later, the program was purged of it's biggest oppressor, and Miles was charged with the duty of finding a suitable replacement. Names abounded, speculation persisted and today, we seem to have reached a conclusion that will likely leave most fans lukewarm at best. But, as my cohort Poseur often says, you don't need to win the press conference... win the hire. So is Kragthorpe a good hire? And what does this mean for the LSU offense? More after the jump...

First off, this isn't the awe-inspiring, melt-your-face-off, decided-strategic-advantage, type of hire.But it gives us a clearer picture of the type of coaches Miles seeks to surround himself with: experienced ones. If there's a decidedly great thing about Kragthorpe, it's that he is experienced. Now, what type of experience? First, let's take a look at his offensive philosophy (as best as I can tell).

Kragthorpe brings a pro-style mentality, which I'm not sure anyone can truly define. Look at Wikipedia's weak ass entry on it. So... you say the pro-style offense is what the pro's do? Cheeky! The common assumption is that pro-style equals downhill running and vertical passing. I don't think that's too far off. Kragthorpe has typically operated an offense with a pocket passer that features an emphasis on the running game (something that should compliment LSU's talent quite well).

If his LSU offense is anything like his 1998-2000 A&M offense, it will feature a good bit of I-Formation, play action and power football. His offense changed during his tenure at Tulsa, however, where he featured more shotgun looks, and in his first two years, utilized a mobile QB (James Killian) who put up 2,200 yards passing and 800 yards rushing in Kragthorpe's first year.

A blogger much more knowledgeable than I took some time to write a couple of informative pieces about Kragthorpe during his Louisville stint:

Discussing him taking over OC duties in his final year.

There's a couple of major takeaways for me from these pieces.

A) Kragthorpe is a "concepts" guy at heart.

A well thought out passing game does not need a lot of plays, just a set of them that "fit together" -- hence Kragthorpe's emphasis on the need to be "concise."

This is what I like to see. The primary issue with Crowton's offense (as far as I can tell) is the lack of true concepts. Crowton can design nice plays, but to what end? Oftentimes, it didn't seem as if we were aiming to accomplish a goal so much as just trying to give a defense so many different looks we would confuse them into mistakes allowing our offense to move. Kragthorpe's philosophies should be more "stripped down."

When Crowton was first hired, there was a lot of talk about the "option routes" in his offense. Essentially, the QB and WR would read the coverage, and that would dictate the type and distance of the routes being run. It's a great idea that has been successful, but also demands a lot from players in terms of both communication and execution (perhaps more than the typical amateur athlete can handle). I could be wrong, but Kragthorpe's offense seems to eschew this for the idea of a total play concept. A route won't be altered pre-snap based on the coverage look shown, but can be tinkered with on the sidelines if the "concept" is proving to not be working.

In the grand scheme of things, I think this will make pre-snap QB reads more important, but also simpler.

B) Kragthorpe has an idea of what he wants to do.

The past several years the LSU offense simply got too big. Did we want to be a spread option team with Jordan Jefferson? Did we want to run an I-Formation? Zone rushing? Spread passing? We had a little bit of it all. Multiple formations are one thing, but when each formation leads to a different style of blocking and different reads it begins to turn into a sloppy mess.

There's likely more knowledgeable posters than me on this subject, and please feel free to chime in with your thoughts.

Finally, I did a little bit of digging on his offenses and here's a rough statistical breakdown. I didn't include Louisville, which everyone is well aware was an abject failure.  His offense terribly declined in his time there, but if you take a little time to do some reading, there were a lot of things going against him at Louisville (multiple bad eggs, being forced to retain staff members he didn't want, etc.). Not that it should just be forgotten, but it also shouldn't be the only thing we use to judge his qualifications. It's a shame that a coach's failures are often taken as their "true" identity and successes immediately dismissed as happenstance. Fans remember failures more than successes.

Here's the broad strokes of what I see from his offenses:

Typically features a very good run game, with an emphasis on balance, perhaps leaning slightly towards the run.

At both A&M and Tulsa, the production of his passing offenses improved. Not only did he take each offense to more balance with more passing attempts, he either kept the rate stats the same or improved them.

Obviously this ties to the above point, but his quarterbacks (and he didn't really work with anyone noteworthy) generally improved their completion percentage while also either maintaining or improving their yards per attempt.

Though he may not be the sexy hire many fans will clamor for, Kragthorpe has a few feathers in his cap still. He coached NFL QB Matt Hasselbeck for one year at Boston College. He was the QB for the Buffalo Bills during what was arguably Drew Bledsoe's best season. During his tenure at A&M, he coached two QB (Stewart and Farris) to two of the most prolific QB seasons in A&M history (this has now been offset).He's well-respected for his ability to develop quarterbacks.

Essentially, Kragthorpe is a coach's coach. He's worked with bright NFL guys like Kevin Gilbride and Dan Henning (who are often loved by coaches and hated by fans), and well-respected in coaching circles. Further, his ties to Texas will be beneficial to re-establishing our recruiting connections there, which have slowed down since the departure of Larry Porter. He's still young, and if I had to guess, hungry to right his reputation. Finally, Kragthorpe is a stand-up guy, which some say doesn't matter as long as you can coach football, but I think we see that Miles values men of high character.

Things set up nicely for Kragthorpe in 2011, where we return 4/5 of our offensive line, two QBs and are loaded with skill position talent. If the LSU offense improves 30 spots as they did this year (which wouldn't be entirely surprising), he'll likely be a folk hero.

Is Kragthorpe the rug that really ties the room together? I'm not sure, but there's definitely people already pissing all over it.