As the Steve Kragthorpe hire continues to be dissected, I decided to seek out the opinion of one of the interwebz' foremost X and O football minds, Chris Brown of Smart Football. He was nice enough to answer some questions for us:

*Ed. Note: Links included explaining some of the concepts to which Chris is referring.

1. You've often spoke about a team's "offense" being more than just a playbook, but an identity. A core group of plays or concepts that everything else stems from. Here at ATVS we've all been in agreement that such an identity has been missing from the LSU offense in recent years. Do you agree with that assessment?

Chris: I think that's probably right. Now, in his own mind, every man on earth is the best lover and playcaller on planet earth, and I'll let you guys figure out which one of those Crowton brings to mind. But I think it's accurate to say that LSU has been pretty "grab bag," in that the variety of looks, plays, and formations they use have tended to add up to less than the sum of their parts, especially once you factor in all the high profile recruits. Whether you can blame Crowton for this is an unanswerable question, but my personal preference has always been to have something to hang your hat on -- something you are good at and can go back to and run against anybody.

2. Do you think Steve Kragthorpe can fill that prescription?

Chris: He has the capability to. I think he learned some lessons at Louisville, and he has experience both in college and the pros so while he's going to have a particular style and has been exposed to lots of ideas, I don't expect him to show up with a 700 page "I'm smarter than the other guy" playbook. The Louisville experience is not what anyone wanted, but it has the potential to be a positive in that he may have learned from it. (Many of the best coaches, Bill Belichick being Exhibit A, succeeded later because they had once failed somewhere.)

3. What style of offense can we expect from Kragthorpe, based on his history?

Chris: I'd expect a pro-style offense, with lots of two-back and one-back sets, multiple formations, with zone and power runs and dropback and playaction passes. Now, this isn't to say he couldn't include some spread elements, like the zone read and so on, but I don't see that as being his focus. And I imagine Miles wanted someone with pro-style experience, as much for recruiting as anything else. I also would expect fewer gadgets and funky looks than Crowton. If it works it will be great, but it probably has the potential to be labeled "predictable" (at least superficially) if the offense struggles.

4. What are some of the basic concepts you've seen from his previous offenses?

Chris: I primarily watched him at Louisville, and one of his issues is he tried to keep a lot of Bobby Petrino's playbook while overlaying some new ideas and delegating playcalling duties. The result was a more mishmash approach than I think he would have liked. My guess will be that he'll run the stuff he tried later at Louisville and used with the Buffalo Bills and at Tulsa, which are your major pass concepts like smash, curl/flat, and various zone flood routes, with lots of play-action designed to throw the ball on deep crosses and square-in and post routes to the outside receivers. 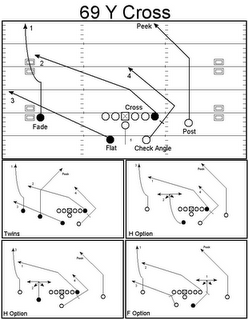 The big question to me will be what his run game looks like. I'd expect zone runs with your typical "power" or "gap" runs, like the "Power O" play and the "Counter." If he can get these established you'll see lots of exciting play-action; if he can't things will probably grind to a halt a bit. I don't remember him using a lot of fancy screens or bootleg or other action passes. But that may have been based on the quarterbacks he has had.

5. Do those concepts mesh with the spread-style attack LSU has been trying to run the last few years, or are we looking at a radical change?

Chris: One of the problems with Crowton's approach is I'm not sure I would have called it a spread. I don't think it will be a crazy transition, like from a Rich Rodriguez spread-to-run offense to pro-style or vice versa, but I think it's hard for any outsider to tell because we don't know how the practices were set up or the reads went. Crowton had been an NFL coach and I'd imagine he wanted to teach his quarterbacks coverages and reads, so I don't think it will be so novel to have a pro-style guy come in and tell the quarterback to throw it to one of these two guys against a two safety defense or these other two guys against a one safety defense. That shouldn't be too revolutionary.

That said, there's an old coaching adage that says every time you change offenses (or defenses), your sophomores, juniors, and seniors become freshman. I think there's truth to that -- fortunately for LSU, those sophomores, juniors, and seniors are all big time recruits, and the talent should help the transition, even if there is a learning curve.

Ultimately, I think the glass half-full approach looks at Kragthorpe as a guy who came from a coaching family and had a lot of offensive success in the pros and in college, if you ignore Louisville. The pessimists will point to Louisville and say that this is a terrible thing. I think the answer is somewhere in between; obviously something went terribly wrong, but I'm not sure that something was limited to his plays, playcalling, and gameplans. And for Les and LSU, I'm not sure you need a let-it-all-hang-out guy like Malzahn. You just need to use the talent on hand. I expect Kragthorpe to do a fine -- if unspectacular -- job of that, though time will tell.