The Cotton Bowl: What to Watch For

Share All sharing options for: The Cotton Bowl: What to Watch For

Oh what a long, strange trip it has been. Honestly, I would have used "The End" by the Doors but Poseur's been in enough pain with all the back surgery. After all, our long journey up the Nung River has come to an end. I suppose you could even draw some parallels between JerryLand and Col. Kurtz's encampment, right? 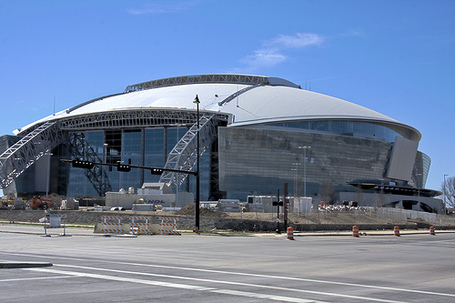 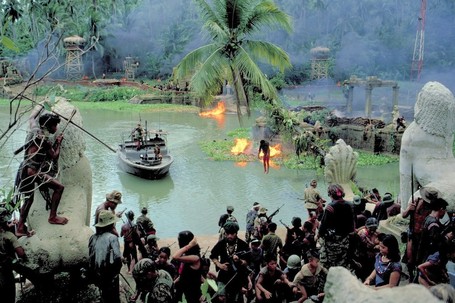 Seriously, all we need is a few palm trees, a mound of coke for Dennis Hopper and voilá!

The final LSU football game of the season. For eight. Long. Months.

Plus we have a nice mysterious jungle staring us in the face after. Les Miles to Michigan? Gary Crowton? No Gary Crowton? Replacements? Zach Mettenberger? Oh my!

And who do we get but our old friends (okay, sort of), the Texas A&M Aggies to send us off on this magical mystery tour, courtesy of the Cotton Bowl.

But that also means we have a game to play, right? So let's get to talkin' about it.

What to watch for on Saturday Friday

The Aggies use a 3-4 front on defense with coordinator Tim DeRuyter, with the attacking style we're used to seeing with such a defense. And of course, we all know about Von Miller, but he and his mates are the top four tacklers on the team.

With a typical 3-4, you sacrifice a little in the size department for speed, making it slightly vulnerable to power rushing attacks. Of course, with the preponderance of the spread in college, the defense and other odd-number fronts like it are becoming more and more popular, because it gets more athletes on the field and allows teams to use faster guys to force plays wide towards the sidelines (once again, inside-out...the way you defend the spread).

Most spread teams thrive on getting speedy guys to the perimeter, so coordinators are always finding new ways to block those edge/overhang defenders. Look for the Tigers to use a lot of multi-tight end sets, something we're used to by now. Smart Football has an informative piece here. The wing alignment is something LSU's used a lot, and Chase Clement and Tyler Edwards have done solid jobs at times as motion-blockers. That also takes us to...

It's not exactly the most popular opinion amongst the Humanoids, but LSU actually started to develop a pretty solid spread-option attack in the final month of the season. Michael Ford, in particular, was the beneficiary of some nice runs on pitches against Ole Miss and Arkansas. Jordan Jefferson also had his most efficient days as a runner against the Rebels, with a solid 45 yards and a touchdown on 9 rushes.  Couple that with Stevan Ridley's inside running on the veer/read plays, plus a little I-formation to attack those B gaps, and LSU might have a solid shot at running the ball on a pretty stout run defense. Baylor managed to rush for 291 yards on the Aggies, albeit in a 12-point loss, with a spread running game very similar to what LSU has tried to be at times this year.

LSU versus spread offense/mobile quarterbacks. It hasn't been pretty at times. The issue is more a problem of execution than of scheme. For all the a-gap pressure Drake Nevis  can generate, a 4-3 defense need a quality speed-end on the perimeter, who can defend the run as well, against these sorts of teams. Sam Montgomery was that player before his knee injury. Lavar Edwards is strong at the point of attack and solidly athletic, but doesn't have the top-end speed. Barkevious Mingo, for all his speed, still has a lot to learn about discipline and lane integrity, and really struggled at over-running his targets at times (and getting facemask penalties trying to stop himself).

Luckily, despite the fact that Ryan Tannehill is a converted receiver, the Aggies aren't nearly as dependent on their quarterback running the ball as other spread teams like Florida, Ole Miss and Auburn - he's averaged just three rush attempts per game as a starter. But that doesn't mean he's not capable, or that he can't make a few scramble pass plays. Containment will be as important as always, and look for Tyrann Mathieu and Ron Brooks to see a lot of action in their typical roles as dime-back blitzers once again. Also, don't be surprised if John Chavis maybe dials up a few delayed blitzes from Ryan Baker or another DB or two. It's a little guess work, but if you time things right, a disciplined rush can funnel the quarterback towards the blitzer coming in late.

With A&M having been going through some rebuilding the last few years, there seems to be the perception that this will be some sort of stroll through the FieldTurf. Make no mistake, this is a solid football team LSU is facing. They stop the run and rush the passer on defense, and what they lack in gaudy offensive stats they make up for in efficiency, as I detailed earlier this week. In some ways, the Aggies mirror LSU, with a stout run defense that still had a few rough games against spread running teams like Baylor and Nebraska.

Besides that, with LSU's offense, we should all know better than to take an opponent likely by now. And that offense will be what it is. Jefferson will start, Jarrett Lee will come in around series No. 3, and chances are the Tigers will need those two halves to form some sort of whole. We'll be frustrated at times, angry at others - and it's a safe bet that something bizarre will happen. Don't let the distance from the regular season make you forget about it.

Does that mean the Tigers can't win? Hell no. With the right gameplan, disciplined execution and some luck, we all know they can. But I'll be surprised if things aren't nip and tuck.