LSU - Tennessee: What to Watch For

Share All sharing options for: LSU - Tennessee: What to Watch For

A trip to Neyland Stadium should never feel this anti-climatic.

And yet, here we are, as LSU prepares to dive into the sea of orange, against a mortally wounded group of Volunteers.

On to the Next One

Yes, I know I've used this video a couple times in the last two years, but A) I really like the song and B) it remains applicable to the situation.

Yeah, we all say things like "the only game that matters is the next one," but we know what's building in the background here. And right now, Tennessee is in the way.

Luckily, there's just enough emotion tied into this one, between last year's game and John Chavis' history with Tennessee (make no mistake, this defense very much plays for their coordinator), to make me expect a focused, business-like Tiger team taking the field.

The Vols will come out as amped-up as they can be, and we know the ol' road-game-upset recipe at this point. Take the field, execute, score and those 100,000 fans will quiet down quickly. Turn the ball over or fail to execute on offense, and things might get dicey.

It's All About Progression

The primary advantage of playing a schedule like LSU's is pretty obvious. The team's been tested early, and seems to be growing stronger for it.

The secondary one has been that from a teaching standpoint, the lessons have built upon each other in a way that the coaches might not have foreseen. Oregon's zone-spread running game was similar to Mississippi State and Florida and is to Auburn as well, and the passing concepts the Ducks and Bulldogs used were also seen against West Virginia. Granted, the specifics change with the personnel and the execution (obviously in the case of Geno Smith and the Mountaineers), but the core concepts are similar enough that LSU's defense hasn't seen anything radically new yet. Likewise, Tennessee's offense will show the Tigers concepts they'll see again against Alabama and, likely, Arkansas as well.

Volunteers offensive coordinator Jim Chaney is, by trade, and offensive line coach. In fact, he's one of the original zone-blocking gurus at the college level. He built most of his reputation coaching that position under Joe Tiller at Purdue from 1997-2005, before spending three years in the NFL coaching offensive line and tight ends during Scott Linehan's tenure with the St. Louis Rams. He arrived in Knoxville with Lane Kiffen, and the attack they built is a case study for how the spread offenses of college football and the NFL have influenced one another. The Precious One was wise to retain him in 2010.

The offense operates mostly out of one-back sets (under center or shotgun), with zone-running and will motion the tight end around to create matchup advantages by shifting the strength of the defensive coverage. And with 13 of his 19 catches coming in the last three games, it seems like TE Mychal Rivera's role is increasing in the absence of Justin Hunter. Chaney will package common NFL concepts like the double-post:

The goal here is to draw a safety inside and create room for the X wideout.

With common spread concepts like the shallow cross, and smash (often packaged with a backside post route designed to split the safeties). The Vols have also done a fine job this season of combining different coverage-beater concepts in a way that can be simple to execute, something Chris Brown detailed here.

Of course, theory and practice haven't worked out the way Derek Dooley and Co. would have hoped. The running game is the worst in the SEC, despite returning a pretty good back in Tauren Poole (who is also less than 100 percent). In fact, it's failed to even crack positive integers through two conference games. The passing attack not only lost the league's best quarterback last week, but WDPD (Weapon of Deep Passing Destruction) Hunter a few weeks prior. Da'Rick Rogers has worked hard to pick up Hunter's slack, and Rivera will be a matchup to watch against LSU's linebackers, but Matt Simms is no Bray. Watch for passes to Marlin Lane and the other running backs out of the backfield as well -- something else LSU will see a lot more of in the coming weeks.

On defense, the Vols are fairly middle-of-the-pack in terms of the SEC, and doing their best despite 12 freshmen or sophomores in the two-deep. The secondary in particular is the second-worst in the league in pass-defense efficiency. But defensive linemen Malik Jackson and Jacques Smith are solid playmakers, and freshmen linebackers Curt Maggitt and A.J. Johnson could be some building blocks for the future.

For LSU's offense, it's all about staying on track. As I've detailed before, LSU's offense is a classic case of the small numbers adding up to the big ones. Total yardage is roughly the same, but with a much more efficient passing game (second best team rating in the SEC, just behind UT) and dramatic increase in third-down conversions (third in the league), the short drives the defense and special teams are setting up are turning into points.

The trend to watch for this week is the continued increase in big plays. Remember this note back after the first three games?

LSU has had just 35 plays of 10 yards or more, and 9 of 20 or more. If the offense is going to take the next step and become a unit that can be lethal against anybody, those types of plays are the difference.

In the last three games, the Tigers have produced another 36 plays of 10-plus, and 14 of 20 yards or longer. Only one other SEC team (Arkansas) has produced as many passing plays of 30 yards or more in the month of October.

The coaching staff is keeping Jarrett Lee in manageable passing situations and focusing on his strengths as a passer, and it's paying off. And if last week is any indication, Jordan Jefferson has a chance to fill in the gaps in Lee's game through the motion and misdirection passing game, when needed. Additionally, we've seen the team rushing average increase by nearly a half-a-yard per carry in the last two weeks.

Whodathunk that by focusing on both the strengths of a team, and a quarterback, an offense could improve?

The 21st Century has seen some weird shit happen when LSU and Tennessee square off. Even when Les Miles hasn't been using his scanning powers to give Derek Dooley a game-saving aneurism... 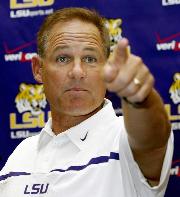 "That's the blood vessel I'm aimin' for, right there!"

There have been games won with backup quarterbacks (by both teams), Monday night football games and one that Jamarcus Russell did everything possible to both lose and win single-handedly. We're all due for something a little more...normal...and I think that's what we will get. Tennessee will damn sure try their best and I expect their defense to fluster LSU at times, but overall, this will be one of the duller games of the series.

The Tigers will run Spencer Ware inside, Michael Ford outside, pass when they want to and generally play off a defense that is overwhelming opponents. The recipe hasn't changed yet, and it likely won't for another 3 weeks.