LSU - Auburn: What to Watch For

Share All sharing options for: LSU - Auburn: What to Watch For

Don’t forget to show support for your favorite coach by voting him as the 2011 Liberty Mutual Coach of the Year at www.coachoftheyear.com

Well, I suppose that's what I get for thinking about how boring this year's LSU-Auburn game seems on paper.

Of course, the top-ranked Tigers will apparently be down three starters, Spencer Ware, Tyrann Mathieu and Tharold Simon, as the other...whatever they're called of No. 19 Auburn come to Baton Rouge. We all probably should have known that there would be some sort of monkey wrench for what's been LSU's weirdest rivalry in the last 30 years or so.

And there's plenty enough in this game to talk about sans the impact of the suspended three, but we'll get there eventually.

Everything about Auburn this season has been u-g-l-y. The wins have been slogged-out gut checks, and the in their two losses they allowed about enough yards to equal 60 percent of the total yardage LSU has allowed this entire season. Gene Chizik's team wants to make this game ugly, and close. Whether involves low scoring and defense or offensive fireworks, makes no difference.

The residents of the loveliest village have found out the hard way the value of having a true genetic freak at quarterback, an experienced offensive line and a dominant man-beast of a defensive tackle. Because this year's team has none of those things, and it's shown in an inconsistent offense and a defense that allowed more yardage than any SEC team has ever allowed (624 yards) against Clemson.

The constant has been running back Michael Dyer, who is currently third in the league in rushing and rushing touchdowns. Gus Malzahn has shifted his offense back to a more running-back oriented style, compared to last year where Auburn relied on Cam Newton for the bulk of the yardage. Most of the core runs like power, counter and zone remain, although this season's go-to play is the buck sweep.* 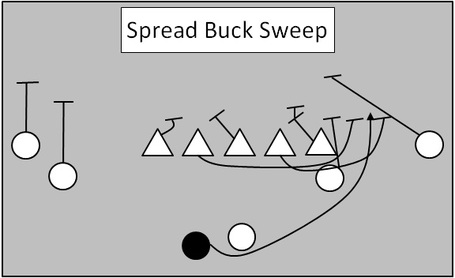 Those of you that played high school ball might recognize the play as a Wing-T staple, which is an offense Malzahn has some background in. It is defined by both guards pulling to lead the play, although Auburn will occasionally run it with just one guard. This can help to disrupt linebacker reads, as they may see a single pulling guard and think power only to see the play moving farther wide. The other Tigers will also use motion to set the play up and orbit action, with the playside receiver running across the formation, as seen in the below figure: 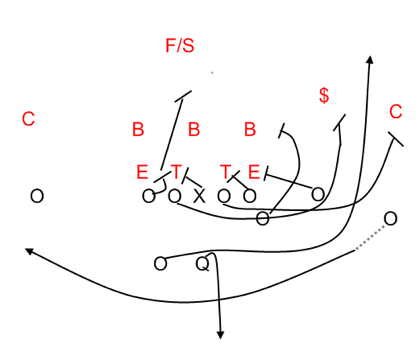 And obviously, play-action pass off of the look. The play fits Dyer well, as he has the size to break the initial tackle and the speed to go a long way once he gets the corner. Remember what I said last week about the progression of this schedule? Dyer might not be playing at Trent Richardson's level, but he's a similar style of runner.

Auburn's going to run it early -- 94 of Dyer's 147 carries have come on first down (along with 580 of his 752 yards) and often, especially with a young quarterback. And you can also expect Malzahn will also use Dyer as a Wildcat-ish quarterback. Kiehl Frazier will also get into the mix running some of those plays, and some of the offense's option plays as well. Look for an unbalanced o-line look in those sets. 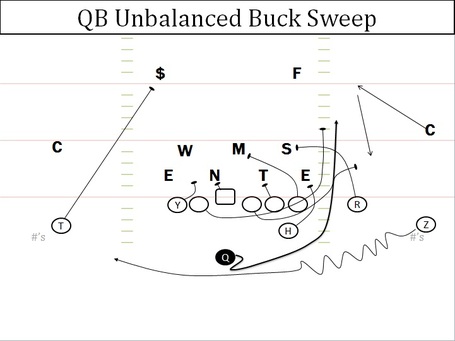 As far as disrupting it, the keys aren't anything revolutionary. Win the line of scrimmage, especially in the A-gaps, and disrupt the pulling guards. Then the linebackers and safeties can scrape to the alley and make the play. Auburn's allowed some 53 tackles-for-loss this season, so the opportunities will be there.

So what does the loss of Mathieu and Simon mean for the defense?

Well, for starters, we're going to find out just how deep this secondary is. Ron Brooks likely gets the start at corner, which means it's a good time for LSU to be facing a quarterback making his first start, right?

Clint Moseley was a three-star recruit in 2009, the 19th-ranked dual-threat QB, per Rivals. He just barely lost the offseason QB competition to Barrett Trotter, but in the wake of Trotter's struggles, Chizik seems to be looking for a spark. Moseley's rep from the Auburn media is as something of an emotional sort, with the stereotypical "gunslinger" mentality. On one hand, that can sometimes lead to passes up for grabs. On the other, a quarterback that is willing to take chances can pay off for an underdog.

With No. 1 receiver Emory Blake hobbled, look for Onterio McCalebb and Philip Lutzenkirchen to work the underneath routes, especially without Mathieu in. McCalebb in particular could be in for more targets without Mathieu. He's been Auburn's go-to third-down receiver with 12 catches, and of course we know how dangerous he can be if he catches a seam. Lutzenkirchen (I admit to patting myself on the back a little for spelling that without looking it up) will, of course, be the team's red-zone target.

Ronnie Vinson and Craig Loston will be the first DBs off of the bench for LSU, the question will be in the deployment. Brandon Taylor started his career at corner, and of course knows this defense better than anybody, so it's conceivable he could slide down into the nickel position with Loston taking his spot on the back end. In the Mustang package, Loston would probably take over the dime spot -- he's done that at times in the past. The upside here is that Taylor's obviously a fantastic run defender, but if he's lined up at nickel he won't be making the secondary checks the way he typically does. Whether John Chavis trusts Eric Reid or Loston to make those is a question I can't answer.

Another potential solution that partly depends on how Auburn attacks LSU could be to use more base 4-3. While Malzahn's offense is almost always spread out, it's very often with backs and tight ends lined up in slot positions instead of pure receivers, so the idea of using LSU's linebackers in coverage (in order to maintain run support leverage) isn't out of the question. But that brings me to my next point.

It's been the clear weakness of LSU's defense this season, balanced out by the overwhelming strengths of the defensive line and secondary. I have no doubt Malzahn knows this, and between his offense's hurry-up style and the various fakes and counters it throws, he will attack them. Look for a lot of the orbit motion (receiver, or more likely, McCalebb, running reverse action) behind the buck sweep. Auburn will try to lull the Tigers to sleep and then BAM! Hit the big play.

The combination of Ryan Baker, Kevin Minter, Karnell Hatcher, Stefoin Francois, Tahj Jones and Luke Muncie -- and I say combination because at the moment Chavis seems pretty willing to shuffle the deck here, in terms of getting the right players out there -- will have to balance reading their keys with using their eyes to stay in position and make the tackle. I can't stress that part enough. Make. The. Tackle. Everybody remembers what happened to this defense last season at Auburn, and bad tackling played as big a role in that as anything.

I feel like I've been harping on the offensive line for most of this season, and while it hasn't exactly struggled, it hasn't exactly dominated either, save for the Florida game. They've been able to wear teams down in the second half, but as we saw last week at Tennessee the first halves have involved a lot of fits and starts. And that can be the difference in tight games.

Auburn's run defense has allowed 175 yards or more four times this season and 225 yards or more three times. Defensive coordinator Ted Roof has justifiably been under a lot of fire, with a defense that has the wrong combination of youth, size, experience and a lack of depth. An offense that can't consistently move the ball and almost never takes much time off the clock, even when it does move the ball, doesn't help either.

On film, they're a smallish group that shows good speed chasing down the outside runs, but struggles with teams that simply pound away downhill. And while that's been what LSU has done best this season, it's mostly been with Ware, who apparently won't be suiting up on Saturday. That likely means his snaps will be spread around between Alfred Blue, Terrence Magee and Michael Ford, with the hot hand getting the lion's (Tiger's?) share. Look for a lot of Blue and Magee on LSU's go-to plays from the I-formation, the inside zone and toss-trap. Ford, along with Russell Shepard, will get the stretch and sweep plays to keep the other Tigers honest.

If the offensive line can create room on those plays on early downs, it will allow Jarrett Lee to keep doing what he's been doing so well this month: stick to throwing the routes he throws best, and throwing them against man-to-man coverage. It'll be important to stay in front of the sticks and avoid clear passing downs, as Auburn has the league's top sacker in defensive end Corey Lemonier (6 sacks, 4 TFLs). The 6-4, 235-pounder is the reigning SEC Defensive Player of the Week will be matched up with Chris Faulk, who also happens to be the reigning SEC Offensive Lineman of the Week. So again, expect the Tigers to run

As for Jordan Jefferson, once again I think his playing time will be somewhat determined by the situation. If the offense is pounding away, you'll probably see a few misdirection passes and redzone plays here or there. But if Auburn is crashing down on the inside like UT did last week, you'll see the spread running package to try and loosen things up (which would likely also mean more carries for Ford and Shepard).

A big reason behind Auburn's fantastic record in close games under Chizik is special teams. His consistent commitment to a sound kicking game has certainly paid off, and this team is no different. Auburn has the SEC's top kickoff team (a 68.9 yard average per kick with 21 touchbacks this season), No. 2 punting unit behind LSU (allowed just 7 returns at a 3.8-yard average) and one of the league's top return men in Tre Mason. I don't really have to say too much about LSU's special teams credentials, although the matchup of Mason concerns me. Kickoffs have been better since James Hairston got into the lineup, but they're still a little iffy. Hopefully he'll keep them going deep into the endzone.

Look for Brad Wing and Steven Butler to each keep the ball away from the other's return men, not that either one of these teams have been lighting up punt returns (6.0 yard average for Auburn, 7.7 for LSU).

*Once again, I can't thank Dr. B and Shakin' the Southland, SB Nation's Clemson blog, enough.