LSU vs. Alabama Hype, As Interpreted by Old-School Pro Wrestlers

Share All sharing options for: LSU vs. Alabama Hype, As Interpreted by Old-School Pro Wrestlers

Some of y'all may have already deduced that I, being one with the finer tastes in life, grew up as a pro wrestling fan. And I don't know that anybody talked up a big event better than professional wrestling, especially back in the old days when TBS and the USA Network  devoted their Saturday mornings to trying to convince you to nag your parents into buying a pay-per-view event. With that said, here's how some of the late 80s greats would have hyped up LSU-Alabama. 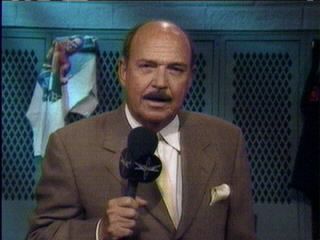 "Mean" Gene Okerlund: Ladies and Gentlemen! As you all know, we are less than two weeks away from a titanic struggle between two of the greatest competitors in our sport, in the Capstone Collision! My guests at this time, are the Legion of Doom, the Road Warriors, Hawk and Animal... 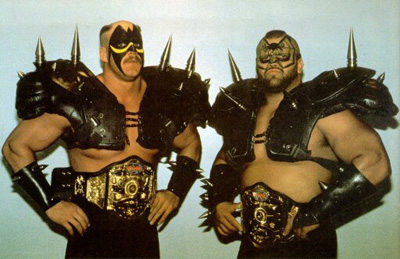 Animal: Alabama! You pukes are about to enter a world of pain! You got 500 pounds of Road Warriors bearin' right down on you, and there ain't nobody that can stand up to the Road Warriors in a fight! Tell ‘em Hawk!

Hawk: Wellllll...Meeeean Gene! You know what makes us sick? Besides EVERYTHING? The Crimson Tide! They make us real sick. They think they're gonna throw their weight around? Good! We wanna throw your weight around too! You see, we don't like you! Or that little sawed-off stump you call a coach! Ain't that right big man!

Animal: That's right, we bench-press lil pukes like you for a warm-up!  And next Saturday, in Bryant-Denny Stadium, the Road Warriors are comin' to town for a full workout!

Hawk: YUP. We're going to teach a lesson. Let's call it the A-B-Cs...the A is for Alabama, the B, is for beaten and the C, that's for the corpse, that the Road Warriors are going to turn into a broken and bloody smear in the middle of that football field! OOOOOOOH WHAT A RUSH!