On homecoming Saturday that was headlined by LSU's win over Western Kentucky, the LSU men's basketball team started off the season with a solid 96-74 win over the Colonels of Nicholls State.  In front of an energized 7,100 fans, the Tigers took control early with some hot shooting and aggressive defense and was able to empty the bench in the final two minutes.  The scoring was very balanced, with seven different players scoring in double figures and eleven of the twelve players made at least one shot.  Both teams were hot from 3 point range, combining to shoot 47% for the game.  LSU was also hot from the free throw line, shooting 25-31 overall, but didn't miss until 30 minutes into the game.

The starting five consisted of:

The real story, though, was the emergence of all of the new faces.  Anthony Hickey Jr. led the way with a 14 point, 5 assist, 4 steal, 3 rebound, 2 turtle doves, and a partridge in a pear tree.  Like most every player in the game, he had a good day shooting the ball, going 4-9 and 3-6 from 3.  He was very quick and very good defensively, as evident by the steals.  Hickey wasn't perfect, and he made plenty of freshman mistakes.  He finished with 4 turnovers, and did take some bad shots at the beginning of the game.  In fact, the entire starting five did, and Trent Johnson took them all out before the first TV timeout. 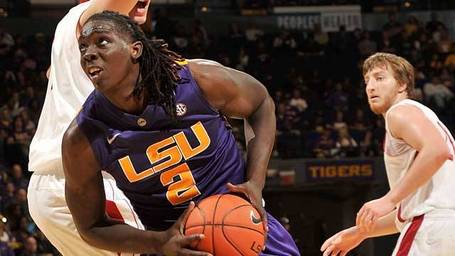 Johnny O'Bryant was impressive, to say the least.  "JOB" came off the bench and immediately scored 8 points on the first 4 trips down the floor.  He was a force on defense, and during that stretch had 2 blocked shots.  Needless to say, the fans were blown away with how polished he looked during his first college game.  O'Bryant worked hard on both ends of the court all game, though like Hickey before him, took a couple of bad shots once his confidence was sky high.  Johnny finished with 12 points, 8 rebounds, and 2 blocks in his debut.  He was able to score both down low and with jump shots.  He was also very good at creating his own offense, and generally backed his man down to get to the lane.

It will be really interesting to see if JOB starts this year, because he is more than capable of starting.  The great part about it is that there isn't anyone we can take out of the starting lineup, at least not yet.  There were 7 players that played well enough to be starters.

Freshman John Isaac was the other bench player that played well enough to start.  Isaac had a really quiet 13 points, though he shot the ball really well.  I think it is because he started the game with a step back 3 pointer that almost broke the backboard.  After that, like all of the other freshmen, he settled down, played his game, and contributed off the bench.

The last new addition to the team, Iowa State transfer Justin Hamilton, also had a great game.  Finishing with 11 points, 4 assists, and 3 rebounds, he backed up the fact that he is a starter over senior Malcolm White.  Overall, there wasn't much to his game, it was simple and effective.  No dunks, just layups, short jump shots, and put backs.

Malcolm White, however, was the one player that had a bad game, and showed why he lost his starting job.  Just like last year, White got into foul trouble early, shot too many fade away shots, and only had 1 rebound.  White will need to step up his game this season, otherwise his minutes will continue to decrease.

Not much was learned about the returning players.  They all generally played the same as they did last year.  Keep in mind, that isn't necessarily bad. Ralston Turner didn't have a good shooting day, going 2-9 overall, but did have a good day from the free throw line, going 6-7.  Andre Stringer still wasn't afraid to shoot the ball, going 3-5 with all of his shots being 3 pointers.  Stringer was the player I was most critical of in the preseason reviews, but he did have a solid game.  He finished with a respectable 12 points, 4 rebounds, and 4 assists.  Knowing that he increased his assist total gives me hope that he will try to find other scorers instead of looking for his shot.  Storm Warren had a good 10 point, 7 rebound day.

Up next for the team is a week that's nearly full of games in the state of South Carolina.  First up is a visit to Myrtle Beach to face off against the Coastal Carolina Chanticleers this Tuesday at 6:00 CT.  After that it is the beginning of the Charleston Classic on Thursday against Northwestern at 2:00 CT on ESPNU.  LSU will face either Tulsa or Western Kentucky on Friday, time TBD, and another game on Sunday, time and opponent TBD.  After a hard fought win over Nicholls, I feel a lot better about the upcoming week, and would be disappointed with anything worse than a 4-1 record.