LSU -- Ole Miss: What to Watch For

Share All sharing options for: LSU -- Ole Miss: What to Watch For

Whatever will our lives be like without Houston Nutt?

A little less stressful I suppose. But less fun. Sure, it's frustrating watching the opposing coach pull everything he can possibly think of out of every orifice on his body, but doesn't it make it more satisfying when you win? I know last year's Ole Miss game, crazy as it was, was one of the more enjoyable victories LSU had in 2010. Houston Nutt pulled out every giggity he had in his giggapurse. Five fourth-down attempts (four conversions), a quick kick, a halfback pass, reverses. Hell, would it shock anybody if he tried to smesmerize the referees into letting his offense run the A-11 this Saturday? 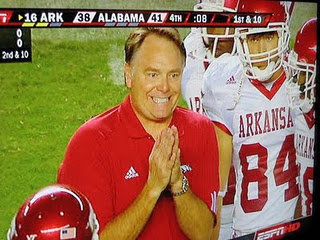 Why no Mr. Referee, there's nothing in your Gatorade. Have my eyes started to breathe the soothing light of obedience?

I mean, it's not going to matter because Ole Miss is going to get monkey stomped, but wouldn't you rather the death rattle be interesting?

Of course nobody needs to be told this. When you're 0-6 in conference play (2-8 overall), and were outscored by Vanderbilt and Kentucky by a combined 3-1 margin, saying that you suck is a little too obvious. But, to quantify it, the Rebels (I feel like the Black Bear jokes are getting played out) are ranked in the bottom three in the SEC, and in the triple-digits nationally, in just about every major statistical category (as in total offense/defense, rushing, passing and scoring), are -4 in the turnover margin AND the most penalized team in the conference. I could go into more details but at some point there are only so many ways to describe a shitty football team. Plus, at some point we're just piling on here.

Anyways, as if that wasn't enough, Ole Miss will also be without starting quarterback Randall Mackey, leading rusher Jeff Scott (one of the few players on this team I've found really impressive in recent years) and backup slot receiver Korvic Neat. Some might remember Mackey's story -- a Katrina evacuee who went on to lead Bastrop to a state championship with Rueben Randle. A lot of amateur recruitnicks warned that LSU would rue the day that they didn't offer the kid a scholarship (he had no hope of qualifying out of high school and wound up going the JUCO route), but the results have made those words laughable. Just a 118.39 passer rating and a completion percentage of 49. Still, he was starting for a reason, and the presumptive new quarterback, Zack Stoudt, has been worse (48-percent completions with just two touchdowns and seven interceptions).

The Rebels run what Houston Nutt's offense has slowly morphed into over the last decade -- a mishmash of classic pro-style looks with some spread option and wildcat concepts mixed in. In truth, that's probably been Nutt's biggest problem in the last few years, a lack of a real offensive identity. This is, of course, something LSU fans can relate to. You can get away with it when you still have really dynamic players touching the ball, guys like Darren McFadden, Felix Jones, Dexter McCluster, Mike Wallace and Jeremiah Masoli, or a talented offensive line. But unpredictability isn't a strategy. Especially if you don't do a good job of disguising it. Either way, you can't live on it. And that's something Ole Miss fans have had to watch unfold the last two seasons.

There's still talent -- Brandon Bolden should be one of the better running backs in the SEC, but he's been slowed by injuries this season and he and Scott have only been able to carry so much of the load. He's a well-built back that runs hard, has good speed (as LSU fans clearly saw last year) and even catches the ball well (95 yards receiving his last two games). And whomever does take over for Nutt will inherit some solid receiving talents in freshmen Donte Moncrief and Nickolas Brassell, who have combined for 49 catches, 780 receiving yards and six touchdowns this season. Brassell, some might remember, burned Alabama for a 59-yard reception to set up the Rebels' lone touchdown in that 52-7 embarrassment.

Return of the Swag

Okay so maybe EDSBS got this song in my head, but nonetheless...

November's been a month of extremes for the Tigers, from the ultimate high (coupled with minimal scoring) of the Bama game to a short sleepwalk and a brutal beatdown of Western Kentucky (coupled with a season-high in total offense). This game represents a chance to stabilize.

This LSU team is going to do what it does. On offense, it'll run the football, throw off of play-action and slowly grind a defense into pinewood pulp. On defense, crowd the line of scrimmage versus the run with man-to-man coverage, work in some zone blitzes on third down and swarm to the football. And the special teams. Oh, LSU's obnoxious special teams. Ole Miss is going to feel like they're getting picked on every time they force a punt. "Wait, we gotta start at our own three now? Well now y'all are just being dicks."

Rebel defensive coordinator Tyrone Nix's MO is what it's always been: combination 4-3 and 4-2-5 fronts with a lot of man coverage and blitzing. And when you don't have good corners, that results in what we've all seen from the Ole Miss defense in the last two seasons: tons of yardage and points allowed. Look for the Tigers to run right at the undersized front-seven (average defensive line weight, 269 pounds per man), which has allowed teams to rush for 200 or more yards six times this season. A heavy dose of the inside zone with Spencer Ware would go a long way towards establishing the line of scrimmage, and keep the passing game in manageable passing situations. And look for whoever is playing at quarterback to make a couple of simple throws when asked to.

This has been LSU's gameplan all season, and it's not changing now. The players have executed it as flawlessly as any of us have hoped, and done it with an attitude. That attitude will be needed over the next three weeks, and we're all hoping to see it on Saturday night.

But, speaking of the quarterbacks...

A Change of Stripes

The last week of listening to Baton Rouge radio and perusing message boards have made me extremely thankful for our commentariat. If I don't tell y'all that enough, I apologize.

The reaction to a 42-9 win has managed to both confuse and enrage me. Reading or listening to people whine like idiotic, immature and embarrassing stage parents, worried more about who the spotlight was shining on rather than how the kids actually performed. The Tigers improved to 10-0 for the first time since 1958, and won by 33 points, yet the only numbers these people cared about are the number of snaps Jarrett Lee and Jordan Jefferson got.

Did I agree with the decision to start Jefferson? Again, without knowing Miles' motivation, or whether or not there was a discipline issue, it's hard to say. I do believe that Lee has earned some rope this season, and probably deserves to start. But I also believe that this team will continue to need Jefferson to be as dangerous as it can be.

But there's one thing that I know. One thing about which I have no ambiguity.

Spencer Hall posted this video in one of his Alphabetical columns at the mothership a few weeks back, noting just how much Les Miles is like his Mentor Bo Schembechler. And while the two are a little more different schematically than people think, when you listen to Bo's "The Team" speech, the influence is undeniable. The mannerisms, the delivery, I'd be willing to bet that even the facial expressions are similar. But the focus is identical. That the team is what matters, above all else.

Everything about this LSU squad is built around that belief. Five different running backs have scored touchdowns this season. Four different ones have had marquee games at different times. The Tigers rotate players constantly at almost every position -- defensive and offensive line, linebackers, defensive backs and receivers/tight ends (and this depth is an advantage we've been talking about since the summer), and the results have spoken for themselves quite clearly. This team has been a machine, and the quarterbacks are just two more gears that have had to function and fit in with the rest of the parts that make it function efficiently.

The individual doesn't matter. The team does.

I have no doubt that Miles and the staff would love to have one quarterback they could trust to run this offense. But they don't have that. Both Lee and Jefferson are incomplete players, and what the coaches have done this season is find a way to make them complete each other. There's a reason why LSU's team passing efficiency is in the top-20 nationally despite being 99th in the country in yards per game. These two fill in the gaps in each others' games. And regardless of who "starts," they are both going to play. This week, next week and in whatever lies ahead in the postseason.

Maybe this approach won't result in your favorite player (whomever that may be), getting to shine, but this team has completely bought in to it. They are behind both of these quarterbacks, and have been in the good times and in the bad ones. And this approach has built a 10-0 team with a unanimous No. 1 ranking. Isn't that what we're supposed to care about?