Very brief Gumbo. This week be crazy, y'all

Thoughts and prayers this week with the Arkansas family after the shocking death of RS Fr. TE Garrett Uekman yesterday.

And also with our Dawg friends this morning on the death of College Football broadcasting legend Larry Munson.

You're going to hear about them all week, so here are the SEC tiebreakers, explained in english.

Meanwhile, EVERYTHING ELSE went crazy in college football this weekend.

Via Red Cup Rebellion, the game (and the Ole Miss season, really) summed up in a few seconds of video.

Missed this last week, Brad Wing got a profile in the Wall Street Journal. Wing also had an interview on Australian sports talk radio, which sounds exactly like you think it does.

The Men's Basketball team went 2-2 on the Carolina road trip, with wins over WKU and Georgia Tech to cap the weekend. More on this from actioncuse later this week.

The Lady Tigers started the week with it's best non-conference win in years and then dropped an headscratcher against Tulane. Something else we missed last week: Coach Caldwell is pregnant and expecting in March.

Press Conference later today, but REMEMBER WHAT'S AT STAKE THIS WEEK! 200 POUNDS OF 24KT GOLD! 4FT TALL AND SHARP AS A RAZOR! ITS BEEN KNOWN TO MAIM A WR OR 2 IN IT'S DAY! AND...It's no longer the stupidest trophy we play for! 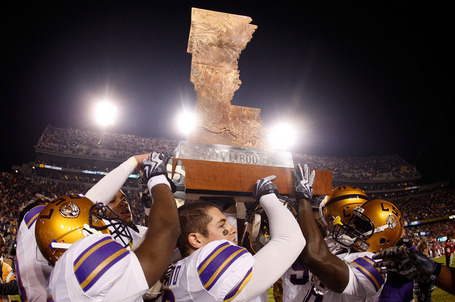