How could anyone doubt this team, even when they were behind 14-0?  This team never flinched.  This is undoubtedly the best team I have ever seen at LSU.  Now the only thing remaining is to make sure the best team I've ever seen has the best season I've seen to go along with it.

I do want to dispel one thing I've seen talked about with regards to this game.  LSU did not sleepwalk through the first 20 minutes of the game.  Arkansas built their lead through very good play on the field, and got a few bounces to go their way early to help them build the lead.  We may not have been at our best, but sometimes you have to credit the other team, and this is one of those times.  The key plays of the first quarter were Dylan Breeding's 70 yard punt that pinned us inside the 10 and his subsequent punt that was downed at the 3.  Those two punts kept our offense hemmed in, and the situation was not corrected until Arkansas was able to take advantage of field position with a touchdown.

Then, once our offense got out of the hole, we started moving the ball, down 7-0.  The LSU offense drove across midfield after starting at the 20.  I am convinced this possession was going to result in a score, except that Tramain Thomas made a textbook helmet-on-ball hit to force a fumble that was returned for a touchdown.  There are bad fumbles that are the result of offensive mistakes, and there are forced fumbles that result from good defensive plays.  That was a forced fumble, to the credit of the Arkansas defender.  That the ball popped up straight into the hands of the streaking defender was an unfortunate bounce, but you can't credit Tyrann Mathieu with creating turnovers and turn around and blame Michael Ford for that fumble.  I think that's why Ford wasn't benched this time.

But that fumble masked the fact that our offense was ready to take over the game.

On our next possession, we drove 77 yards on 14 plays, and by the end of it Gary Danielson was pointing out how our offensive linemen were having trouble finding any Razorbacks to block at the point of attack, because they just weren't there anymore.

As usual, our offense got stronger as the game went on.  Defensively, we allowed only one sustained drive, partially a result of good field position.  It is telling that after Arkansas's first and only touchdown drive, they got only 7 first downs the rest of the game.

The rest of the first half was the Tyrann Mathieu show, as he returned a punt for a touchdown and forced a fumble that resulted in our third touchdown.

In the second half, Arkansas' defense was living on borrowed time.  We moved the ball 68 yards on our first possession, and appeared to be going for a game-breaking score until Jordan Jefferson tried a little too hard to force a throw he probably should have tossed into the bench, and Tramain Thomas made another tremendous play to snag the interception.  Again, credit the Arkansas player here, but LSU was moving the ball with ease by this stage of the game, and unless Arkansas's offense could do something to put pressure on us, it was obvious the dam was about to burst open.

Arkansas put together one big play on their subsequent possession to cut our lead to 4 with a field goal, and our offense drove 76 yards but again wasn't quite able to finish the drive and settled for a field goal to bring the lead back to 7.  You could sense that something was about to happen to change the character of this game.  LSU's offense was imposing its will but wasn't quite able to finish the drives in the second half, and Arkansas's offense was still fighting.  Either Arkansas would put together a big drive here to pull back into this game, or LSU was going to blow this open.

LSU blew it open as the defense took over.  Arkansas went backwards on their next possession, and gave up a good punt return to Tyrann Mathieu, setting us up on the Arkansas 45 yard line.  The LSU running game took care of the rest, as we only attempted one pass (which was incomplete) on our way to the end zone.  Morris Claiborne ate up a Tyler Wilson throw on the first play of Arkansas's next possession, and the route was on two plays later when Jordan Jefferson took it 48 yards to the house to put us up by 21. 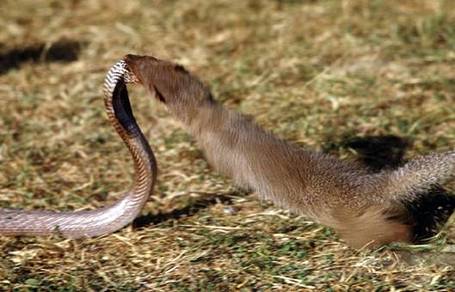 Two cobra-killing animals on one team?  Why not?  via deskofbrian.com

After that, it was time for Bobby Petrino to make it all about him.  Arkansas punted on their next possession, after finding themselves at 4th and 19 from their own 11.  Arguably, the Razorbacks were conceding the game, which I found a little surprising.  Les Miles refused to pull the starters and even continued passing the ball (but remember, we hammered Arkansas on the next possession without passing).  We've all seen the videos of Petrino pointing across the sidelines and yelling, "F--- you, m----- f-----."  We've also seen the footage of him not being particularly sporting at the final handshake.

I will say for the record that I thought Arkansas was conceding with the punt, but we weren't even halfway through the 4th quarter when we got the ball.  I think it would have been appropriate to bring in Jarrett Lee, Terrance Magee, and some of the reserve wide receivers, and then run the basic offense to close out the game.  Remember however that last week, Miles took a lot of criticism for pulling into a victory formation with 5 minutes to play.  Remember also, that this was not Ole Miss, but Arkansas, who had already shown they could turn us over and could strike quickly.  One quick turnover and quick score, and Arkansas would be kicking off to us down 14 with about 7 minutes to play.  Yes, maybe Petrino was conceding the game, but that doesn't mean strange things couldn't happen.

Give a lot of credit to Arkansas here.  Under some very trying circumstances they came to Baton Rouge and put up a heck of a fight against one of the best teams the SEC has produced in recent memory.  They made some plays, and put a scare into us.

Then after you give Arkansas credit, remember to give our team credit for being awesome.  Our 4th string tailback, Kenny Hilliard, had the best game of his career as we just keep showing that new and different faces produce the same results.  Rueben Randle put together one of his best games as a Tiger with 9 catches for 134 yards.  Gary Danielson said that LSU fans believe next year's team could be better than this year's, and while I think that's wishful thinking, a lot of that thinking is probably predicated on the assumption that Randle is returning for his senior season.  I think he will be very tempted, and I suspect he will grade out somewhere between late 1st round and late 2nd round on the draft board.  I hope he comes back.

Georgia is next.  I've watched them play three times.  Twice they looked terrible but won anyway against Kentucky and Florida.  Once they looked dominant in beating Auburn.  I hate to be cocky, but I don't think Georgia has anything for us.  Aaron Murray has thrown a lot of touchdown passes (and interceptions) this year, and their defense has gotten a good reputation, but this team looked dysfunctional offensively most of the times I've seen them play, and as we have seen over and over again, what you were able to do to teams other than LSU has meant nothing when facing LSU.