And the Valley Shook shows you how to prepare a New Orleans Thanksgiving/Holiday staple -- Oyster Dressing.

EDIT: Repost for the Hollidays

First off, let's get something out of the way. To all you people who eat stuffing on Thanksgiving, you are all living a lie and should repent. I bet you're also the kind of man that shakes a pom-pom at a football game too. It's sexual deviancy is what it is.

Anyways, anybody from south of I-10 knows that you eat DRESSING, and that it should have oysters (or sausage) in it. In the Gomila household it is a tradition, and for most of my life my grandmother, who was New Orleans in every sense of the word, cooked it the old-fashioned way: with stale French bread, sliced up and soaked in the Oyster water. I started using this recipe the first Thanksgiving after she passed, out of Paul Prudhomme Louisiana Kitchen cookbook, and ever since then it's become my yearly contribution to the feast. In truth I was quite surprised to find out how foreign of a concept this dish is to yankees from up north of Baton Rouge. Yes, I'm a bit late getting it posted here, but y'all can still use it for Christmas dinner.

I've always thought that the biggest key was the way Prudhomme calls for the onions/celery/bell pepper to be deeply browned, about as browned as you can get them without burning. Really adds a lot of flavor, but it also raises the cooking difficulty level. Really, you just have to be extra attentive.

1. Combine the oysters and the water in a bowl and place in the fridge for at least an hour. Eventually, you'll have to strain the oysters out of the water.

2. Combine the seasoning mix ingredients and set aside in a small bowl.

3. Melt 3 sticks of the margarine in a large skillet or dutch oven over high heat, and add 1 ½ cups of the onions, and 1 cup each of the celery and bell pepper. Saute until the mixture is a dark, rich brown, but not burned. This is the difficult part, as you'll have to pay attention and stir the mixture almost constantly. 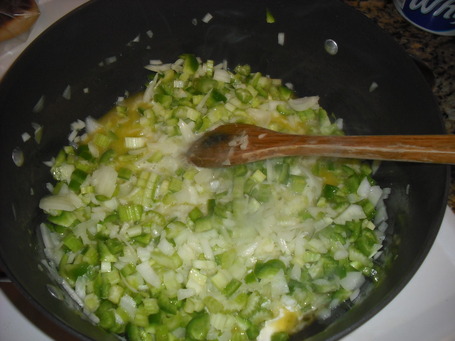 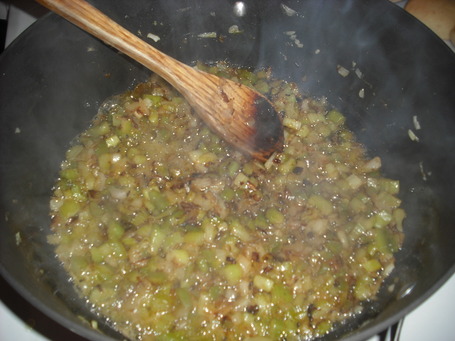 4. Add 4 tsp of the seasoning mix, and the garlic. Reduce your heat to medium and cook for five minutes. 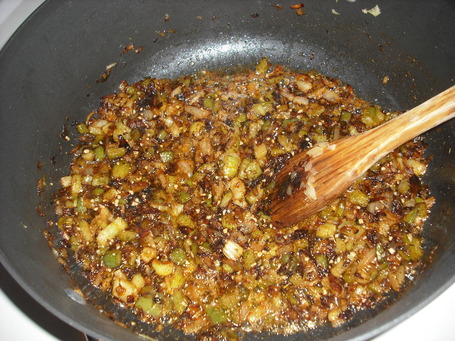 5. Add the remaining onions, bell pepper and celery, along with the final stick of margarine and the bay leaves. Stir until the margarine is melted, and then cook the mixture for 10 minutes, stirring occasionally. 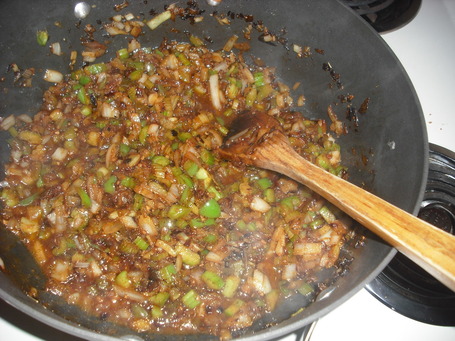 6. Add the reserved water, bring the mixture to a boil and cook 10 minutes on high heat. 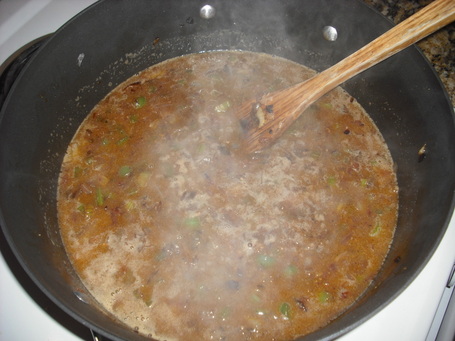 7. Stir in the remaining seasoning, and add bread crumbs until the dressing is fairly solid. You might want to add extra bread crumbs and make it extra dry, because there will be more liquid released when the oysters cook.

8. Remove the mixture from heat, and stir in the oysters. 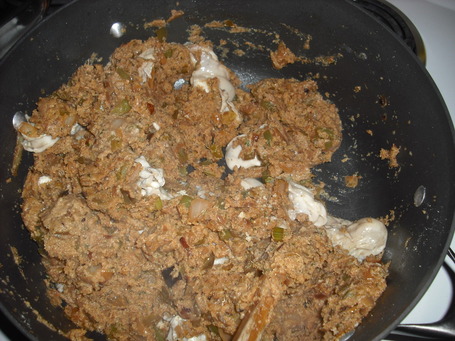 9. Place the mixture in an ungreased baking pan, and bake uncovered at 350 degrees for 30 minutes.

10. Remove from the oven, and fold in the butter (what, do you want to live forever?) and green onions. This should serve about 6-8 people or so. 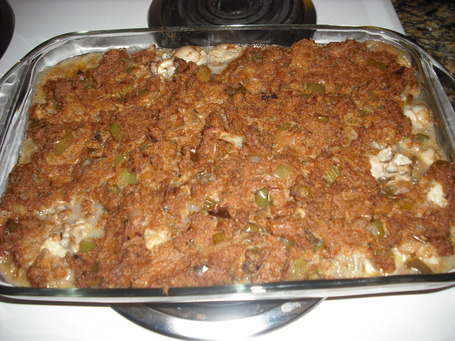