After a glorious road trip that featured 2 come from behind victories, the LSU Tigers return home for a 3 straight at home against some good competition. First up is another game that would be a lot more interesting on the football field, as the Boise State Broncos make their way down to Baton Rouge for a game tonight. Tipoff is set for 7:00 CT and the game is going to be on CST.

Trent Johnson is a former player for the Broncos and as you might have guess, also a graduate. Sadly, I couldn't find any video, but luckily their was a picture from the Idaho paper. 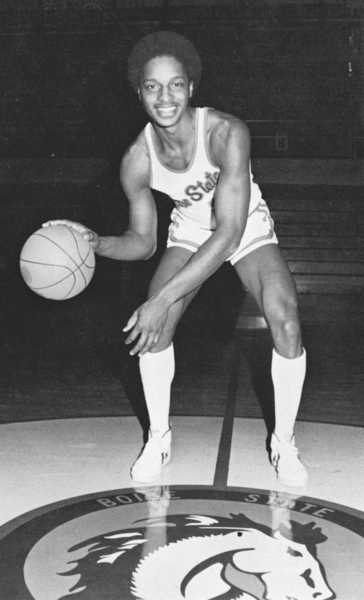 Boise comes into the game on a 5 game win streak, and with an 8-1 overall record. To be fair, their record is somewhat inflated from playing some really bad teams. However, their win over Indiana State is decent, as the Sycamores were an NCAA tournament team a year ago. Boise has only played one road game thus far, though, and it was a loss against the surprisingly good Long Beach State team.

The Broncos are led by juniors Drew Wiley and Kenny Bucker, who each average nearly 10 points a game. It's freshman Anthony Drmic who leads the team in scoring, however, with over 15 a game. Thus far, Wiley has been shooting it really well, and is at 54% from 3 for the season.

Also, the Broncos have a player named Igor Hadziomerovic from Australia. He averages over 7 points a game, so I'm really hoping he makes a shot so I can hear how that name sounds.

Boise goes about 9 deep, and no player averages 30 minutes a game. It's worked out well so far for the Broncos, as each player in the rotation has averaged at least 6 points a game so far. With limited minutes for everyone, it will make it tough for LSU to figure out who the key player is. Drmic would be one you need to keep an eye on, but after that they have shown that anyone can step up, and LSU will need all 5 players to be solid defensively when they are on the floor.

As for LSU, the Tigers have rebounded nicely from a horrible OT loss to South Alabama. Houston and Rutgers were each more difficult teams to beat than South Alabama, and they won those games on the road. Even though our basketball team is unranked and average, there's always a target on our back just because there's LSU on the front.

LSU executed a perfect gameplan against Rutgers, and it was exactly what everyone knew it was; get Biruta into foul trouble. The Tigers did that, and the big man fouled out with only 8 points and 3 rebounds, both below his season averages. Anthony Hickey scored the go ahead bucket and the next one to put LSU up 3, but it was really Justin Hamilton that led the team in the second half.

All 9 of Hamilton's points game in the second half, and he was the difference in erasing the 5 point halftime deficit. It was an ugly game for the guards on both teams, as they combined to shoot 5-27 from 3 point range. Andre Stringer accounted for all 3 of LSU's 3 pointers, as he led the game in scoring with 13 points. Ralston Turner still didn't get on track, and continued to miss open shots and finished with a terrible 3-12 shooting day.

In other news, it looks as though Johnny O'Bryant moved into the starting lineup, replacing Storm Warren. It's surprising to me that he would get the nod over a senior, but he played well in the starting role with 11 points and 6 rebounds. We will have to hope that this motivates our seniors who will now be coming off the bench, because it's clear that Johnson isn't going to give them the benefit of the doubt for poor play.

I was able to watch the second half of the Rutgers game, and really, I didn't learn much about the team. Honestly, after coming back against teams other times this year, I expected LSU to make a run. Luckily for us, Rutgers is even more inexperienced than we are, and it cost them. With Biruta out, Rutgers had to rely on freshman guards that couldn't deliver. They missed poor shots at the end, and LSU made them pay with transition baskets. In what seemed like a blink of the eye, LSU took the lead and made their free throws.

Credit LSU's defense also. They knew that Rutgers would have trouble scoring without Biruta in the middle. They wouldn't let the Scarlet Knights get the ball to anyone without having a hand in their face.

What's in store for tonight? I'd like to think that LSU is a favorite, but Vegas is only giving Boise a point tonight. With the way that Boise shoots the ball with relatively good accuracy, LSU will need to play a complete, defensive game. LSU's offense wasn't pretty on the road, but they held both teams to under 60 points. Looking back LSU has done that against 4 teams so far.

Before the season I thought LSU would have an easy game against Boise due to their inexperience. I no longer think that is true, however, I still think LSU will win the game. Boise hasn't played a team other than Long Beach State that has the raw talent that LSU has. I think Hickey and JOB will be able to use their talent against the Broncos, while our size down low will give them enough trouble to end the semester with a win.