**Ed. Note: I'd actually started working on this a few weeks back, but Poseur beat me to the punch on the Muppets. However, I have few rules in life, and one of them is that there's no such thing as too many Muppets.**

You never know who will show up in the balcony at the Varsity. 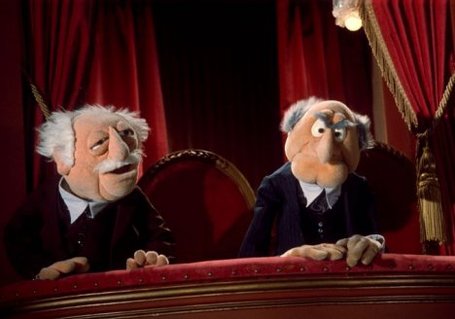 Maybe they were in town promoting the movie or something, but either way, I had a captive audience (they still glue themselves to the chairs for some reason) and couldn't help but wonder what two of the world's harshest critics thought of SEC football in 2011.

Billy: Well, now that the regular season is over...

Statler: It sure went by quick. I've had naps that lasted longer.

Waldorf: They were more exciting too.

Billy: So you guys are buying into 2011 being a down year for the SEC too?

Waldorf: Are you kidding?

Statler: Our ex-girlfriends have parts with less sagging.

Billy: I guess the league took a bit of a step back. Defending champ Auburn in particular...

Statler: Yeah, and they should take a few more.

Statler: However many puts them in another conference.

Waldorf: Maybe we should help ‘em out.

Statler: Yeah but we'd have to figure out how they got in!

Billy: But on the upside, Vanderbilt actually made a bowl game.

Statler: That James Franklin, he really seems to be on the ball. He might actually know what he's doing.

Waldorf: He's feisty too. Seems like he's itching for a fight.

Statler: That's why he picked it with Ole Miss.

Billy: He's laying a foundation for success over there.

Waldorf: Yeah but knowing Vanderbilt's track record it's only a matter of time ‘til he's buried under it.

Billy: Speaking of Ole Miss, they bottomed out and made a coaching change.

Statler: Character. Heh. So does that crack in my windshield.

Waldorf: Yeah but the windshield's a lot cheaper to replace!

Billy: C'mon now, the coach at least tried pretty hard to squeeze what he could out of this team. He should get some points for effort.

Waldorf: It's not like Ole Miss got points for anything else.

Statler: Egg Bowl? What's an omelet competition got to do with football?

Billy: That's what they call the State-Ole Miss game every year.

Waldorf: It sounded harder when it involved cooking an egg.

Statler: Why would he want two more years of them?

Waldorf: Why would they want two more years of him?

Statler: Why do we care?

Statler: That Bobby Petrino. He is a coach after my own heart.

Waldorf: He keeps in rhythm with a pacemaker?

Statler: No he's small, angry and filled with bacon fat.

Billy: That ain't all he's full of. How about Tennessee and Derek Dooley. Rough year up at Rocky Top.

Statler: You've got to love that young man's fashion sense. Those orange pants were a great idea.

Waldorf: Why do you say that?

Statler: They were so ugly that nobody paid attention to the football team.

Billy: Well, how about Kentucky?

Billy: No, that's just their coach.

Statler: Leave the one-liners to us.

Billy: Okay, how about the Florida Gators. Pretty rough year for them.

Statler: Oh there's nothing sadder than a toothless gator...they just sit there and gum at their food and can't get it down.

Waldorf: You fool, that was me after you hid my dentures last night!

Statler: I tell you one guy who never has problems eating, that Charlie Weis.

Billy: Oh c'mon y'all any idiot can make a fat joke about Weis

Waldorf: They can probably call better plays too.

Billy: Besides, he doesn't even coach there anymore -- he's at Kansas now.

Statler: Why would they hire a football coach to coach basketball?

Billy: They hired him to coach their football team.

Waldorf: Kansas has a football team?

Billy: Why else would they hire Weis?

Statler: I hear his appetite is recession proof.

Billy: How about over in Tuscaloosa? Things just came up short for Alabama during the regular season.

Waldorf: Of course, that Nick Saban's used to coming up short for a lot of things.

Waldorf: You'd think he could find a kicker that can kick it over his head.

Billy: Short jokes, shouldn't you guys be above that that sort of thing?

Billy: I mean, can't y'all come up with something a little more creative?

Waldorf: Give us a do over.

Waldorf: Too bad they don't get them on field goals.

Billy: I shudder to think about what y'all will say about LSU.

Waldorf: We love ‘em! You know they've got that kid they call the honey badger

Waldorf: I said they call him the Honey Badger!

Billy: I think you mean honey do, not honey badger.

Statler: You haven't met my wife.

Billy: I'm kind of surprised either of you two are married.

Statler: So are our wives.

Waldorf: Why do you think they're so mad all the time?

Billy: He certainly had a great season. Made himself a Heisman-Trophy finalist.

Statler: I wouldn't have believed it if I hadn't seen it.


One of my all-time favorite Muppet Show bits.