It's not officially Big Monday yet in college basketball, but it felt like it for LSU fans, as the LSU Tigers defeated the #10 Marquette Golden Eagles. Marquette came into the game riding a 10 game winning streak. At times were making it look easy. LSU, on the other hand, extended their winning streak to five games, and look to make it six this Thursday against the North Texas Mean Green.

Like the previous four wins in the streak, it was the defense that got the job done for LSU. Marquette was off balance all night, and couldn't find a reliable scoring threat other than Jae Crowder. Crowder torched the LSU defense for 22 points and added 9 rebounds to lead the game in scoring. On the LSU side, it was Ralston Turner that finally got hot and put up 22 of his own. It was his touch from long range that was the difference, as he made key 3 pointer after key 3 pointer, finishing the night shooting 4-5.

The real MVP for LSU, however, was senior center Malcolm White. Looking over the box score, it looks like he had a pedestrian 5 point 4 rebound game. Watching the game itself, it was clear that White was the soul behind the upset bid. White entered the game with LSU down 13-0 early. By the time most of his playing time was done with, LSU had a 26-23 lead going into the half. It wasn't solely his contributions that actually created the points themselves for LSU, that distinction belongs to Anthony Hickey. White's energy, willingness to get loud, bump elbows, and perhaps even get under the skin of the Marquette players was what LSU needed.

The player that does have a box score that pops out to you is clearly Anthony Hickey though. 8 points, 6 assists, 5 rebounds, 4 steals, and 2 blocks. Is there a stocking stuffer joke to be made about a statline like that? Counting some of the turnovers that he caused, Hickey was involved in nearly every big play. He got hot to start the second half, but cooled off as the rest of the Tigers started catching up with him.

One of the biggest was a jumpshot by fellow freshman John Isaac in the corner for two. Hickey got the assist on the shot. Isaac did a fantastic job filling in for the ailing Andre Stringer, finishing with 7 big points. He, like most of the Tigers, had a few ugly turnovers, but his shooting touch was what LSU needed.

The last guard, Chris Bass, continued down the same path as he has been on for this season. 2 points, 4 steals, 2 assists. Just solid, not spectacular, play that makes everyone else on the floor better. A floor general, at times, and someone that LSU is lucky to have guiding our inexperienced freshman.

Justin Hamilton, once again, was the clutch player LSU needed in the final 5 minutes. All 13 of his points came in the second half, and 7 of them were from the free throw line. Whether you watched the game or not, the box score tells the story of how ugly the free throw shooting was before the last minute when he went 7-8. The other baskets he made were just as critical.

The bench production tells the story for the most part. LSU had 24 points from the bench. Marquette had 4. Both teams were without key players, but it was the role players on LSU that stepped up. It feels weird seeing a statistic like that for the team that isn't the 10th ranked team. Marquette has ultra talented starters, but when LSU was given chances to extend the lead against the less talented bench, they did.

The rest of the story is told by the assist numbers. 7 for Marquette, a team that averages 20 a game. LSU was successful in forcing selfish play from the Golden Eagles, along with quite a few turnovers.

I mentioned previously that LSU has been on a rollercoaster season, and it's nice to finally be at the top of the ride. Certainly more to come from this as the college basketball world reacts to another undefeated team losing a road game. 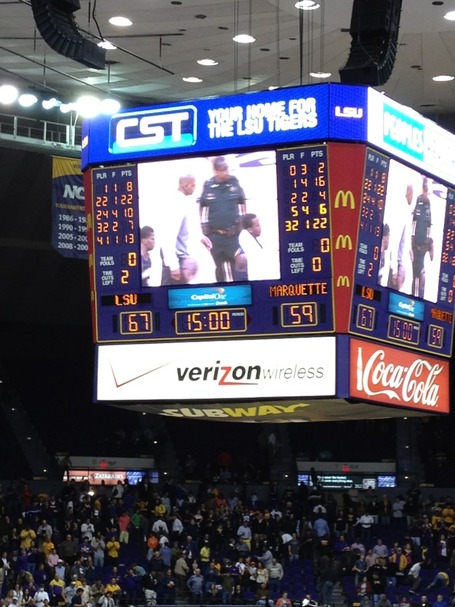 via SB Nation blog bro LSUHornet17 from At The Hive