Day 1 from the SEC/Big East Challenge is complete, and it wasn't all that bad considering that there was really only one good game on paper. Georgetown defeated Anthony Grant's Alabama squad on a last second three pointer to tie up the series at two wins for both conferences. Ole Miss tried their best to lose, which isn't all that surprising, but held on for a two point win after being up 17, giving up the lead, and retaking it. Cleveland Melvin for DePaul had a game to forget. Providence and Kentucky both won comfortably over South Carolina and St. John's in the early games. Bruce Ellington made his return to the court after playing on the Gamecocks football team. However, as you would expect, he was rusty and didn't have all that great of a game, only scoring 6 points on 3-11 shooting.

Tonight's games, however, should be a lot more fun to watch, especially the ESPN double header of #9 Florida vs. #3 Syracuse followed by #19 Vanderbilt vs. #6 Louisville. Combined, the teams have a 23-3 record, though all the losses are held by the SEC teams. Cincinnati travels to Georgia, while Seton Hall welcomes Auburn to round out the day's games.

I'll start off with UF/Syracuse simply because that's my team and it's the biggest game in terms of rankings for the entire challenge. Both teams have been superb for the virtually the entire decade, and each of them have won a national championship in that span. UF won back to back titles in 2006 and 2007 and was dominant for virtually the entire 2007 season. Syracuse struggled during that 2006 to 2008 span, but have rebounded recently with seeds of 3, 1, 3 in the previous three seasons for the NCAA tournament. These teams have met quite a bit recently, once in 2006, 2008, and 2009. UF won the first meeting, while Syracuse won the last two.

I would be a horrible person if I didn't mention that I was actually in attendance for the last game UF faced off against Syracuse. It was in the 2009 SEC/BE challenge and was in Tampa in the St. Pete Times Forum. UF really didn't travel all that well despite the game being only about two hours from campus, and I was able to sit in the front row. Rick Stansbury shook the hands of all 6 of the Mississippi State fans that made the trip to watch them rip apart DePaul.

The real reason I just wasted your time with that is because of the sights of the game. I think the picture speaks for itself. The chant of "21 shits his pants" is perhaps the funniest chant that I have ever yelled. 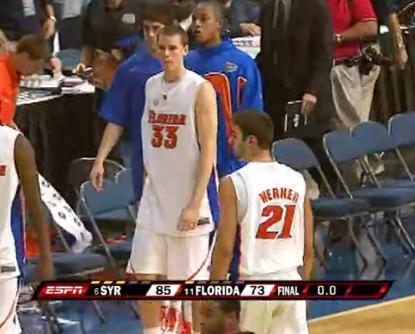 Now that I got that out of the way, here's what to look for tonight in the rematch. UF has some of the best guards in the nation. Bradley Beal is a future superstar for the Gators, and is already putting up fantastic numbers. Erving Walker and Kenny Boynton are sharpshooters from the outside, and Mike Rosario is a former McDonald's All-American himself that transferred from Rutgers. Combined, they average 61 points a game. Patric Young is their center, and he has rebounded nicely from a poor freshman campaign. After that, however, there isn't much depth at the forward positions for the Gators. Erik Murphy, the only other forward with experience, will be sitting this game out with knee problems. He is lucky that he didn't tear his meniscus, as the doctors originally though.

Syracuse, on the other hand, is led by their forwards. Kris Joseph is the All-American candidate for the Orange. He's averaging 14 points a game and shooting the ball extremely well from 3 at around 41%. James Southerland is the most efficient scorer in the nation in this short season, but was held scoreless in the only games against true competition this season. He will have to step up against non-cupcake teams. Fab Melo is almost a mirror image of Young. He had an extremely poor freshman season as well, and has improved quite a bit in his second year. Scoop Jardine and Brandon Triche still start at the guard spots as they have for two years now.

The game could really go either way, but I just don't see a way that UF will be able to defend well enough to win. Their size problems are evident just by looking at the roster sheets. The 2-3 zone presents opportunity to hit shots, but without a rebounding threat other than Young, they will need to shoot at a very high percentage. I think Syracuse gets the win by about how much Vegas says, 6 points.

The other game that will be going on at the 6:00 timeslot is Cincinnati against Georgia. Cincinnati is a veteran team, led by Yancy Gates and Dion Dixon. Sean Kilpatrick is also playing very well as a sophomore. However, so far Cincinnati has been disappointing to say the least. They have a horrible loss already to Presbyterian, as well as a somewhat bad loss to Marshall. They have yet to play a team from another major conference, so this game could be a lot closer than it seemed at the start of the season. Georgia, on the other hand, has been tested this season. They've only won one of the difficult games, against Notre Dame, and fell to California and Xavier. Still, none of those losses took place at home. The Bulldogs basketball team is hoping that enough people will stick around in Athens for one more win before heading to Atlanta for the big game.

All signs really say to pick Cincinnati, but I think Georgia has a real shot to win this game. Although Georgia hasn't been all that impressive so far, and are also quite inexperienced, Cincinnati looks extremely vulnerable in this game. If Cincinnati isn't ready to play, perhaps how they weren't against Presbyterian, they won't win. They don't have the talent of a team that can just show up, even though they have a ton of experienced players. Overall though, I think the safer bet is for Cincinnati to win. Upsets do happen, and this game seems to be the most likely candidate for it to happen.

In the second set of games, Auburn travels up to South Orange/Newark to take on the Pirates of Seton Hall. Both teams have gathered quite a few wins over inferior opponents, with the lone loss between these teams coming in the Charleston Classic when SHU fell to Northwestern. Seton Hall is a team that has a somewhat rich history in basketball, though it all went away after P.J. Carlisimo left after leading them to the championship game where they lost to Michigan. Despite only being in the tournament 9 times, it's still quite impressive for a small, private school to reach the title game. Excluding Duke, I can't recall another school doing that until Butler did the last two seasons.

Auburn is still one of the bottom teams in the SEC right now, though they haven't messed up yet like LSU has. The Tigers are still quite young and will need someone to step in and fill in for Earnest Ross. Frankie Sullivan is the leading scorer through 4 games, but they are also yet to play a game against real competition, as well as a game on the road. Seton Hall is led by upperclassmen Jordan Theodore and Herb Pope. Pope is a rebounding machine and has consistently out rebounded the best of the best in the Big East during his career. Right now he is on a tear, averaging over 20 points a game and 11 rebounds a game. After those two, though, Seton Hall really only has Fuquan Edwin playing at a high level, and only has about 6 players taking up a bulk of the playing time. Foul trouble will cause problems for Seton Hall all year long.

This game should be a close one, but I'm just not ready to say that Auburn can steal a win on the road. Pope is a player that can take a game over by himself, I've seen it happen many times, and I don't think Auburn will have an answer for him. I do think this will be a close game, but I think Theodore's good foul shooting will keep it out of reach for the Tigers at the end.

Last but certainly not least is the second best game in terms of matching ranked teams as the 19th ranked Vanderbilt Commodores head up to take on the 6th ranked Louisville Cardinals at the ridiculously named KFC Yum! Center. Both of these teams suffered first round upsets last year in the NCAA tournament, while the Commodores are far too used to it happening. The 'Dores are coming off a tough overtime loss to Xavier, while Louisville is still undefeated, despite having multiple players out with injuries. Vanderbilt is still without Festus Ezeli, and his absence has been costly to say the least. John Jenkins and Jeffrey Taylor still lead the team in scoring, but the team as a whole has been inconsistent without Ezeli in the middle.

Louisville, on the other hand, has remained perfect so far after beating a couple of teams that will be resume boosters later on in the year, such as Butler and Long Beach State. Kyle Kuric leads the team in scoring, while freshman Chane Behanan has stepped up and leads the team in rebounding with over 8 a game. Peyton Siva has a ton of assist already, but also quite a few turnovers. Defense has been their strength so far, and it will need to be very stout once again if they wish to beat the Commodores.

In this game, it's really a classic battle of offense vs. defense. A lot of people will write off Vanderbilt because they are without Ezeli, but I don't think they should. Louisville has problems to be worked out on offense, and despite holding teams below their scoring average, I think Vanderbilt has enough of it to knock off the Cards. Both teams, in my opinion, started off this season a little bit overhyped because they returned so many players. But that doesn't necessarily mean they are as good as their ranking. I think Louisville is one of those teams. They are certainly good enough to be ranked in the top 15, but I question whether they are the #6 team in nation. Vanderbilt has already suffered their losses to bring their ranking closer to where it should be.

So after day two, I think the Big East takes a lead in the challenge. I think the fact that three of the games are road games for the SEC will give the Big East the edge going into the third and final day. All of these games can be seen on either ESPN or ESPNU starting at 6:00 CT.