The team spent the last few practices working on fundamentals and early stages of the gameplan. Noted in the press conference is that OG Josh Dworaczyk, who is still appealing for a 6th year of eligibility, seems to have made his decision to only coach in the BCSCG and not attempt to make the field. It was mostly cheerful conversation, with Miles joking around as usual until the matter of another fatal crash at the LA-1 crossing in Addis was brought up, the same intersection where Miles' sister was killed last spring. The full press conference is posted after the break.

The team was sent home for Christmas, but not before being entertained by coaches Miles, Cooper, and Wilson at the team Christmas party. 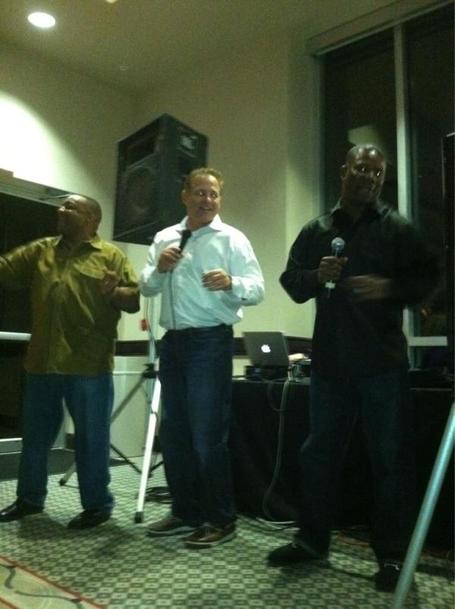 In one of the odder things to happen in conference realignment, LSU has taken an ad out in the Shreveport Times today, wishing good luck to Mizzou, who is playing in the Independence Bowl this weekend. They're playing UNC in a game i'm sorta ambivalent about, but it's the only game on TV on Dec. 26th, so we might as well have some rooting interest.

No one know yet where Gunner Kiel, the next GREATEST QB PROSPECT EVAR, is going but here are some highlights of why so many teams, including LSU, Notre Dame, and Vandy are after him.

Despite a slow start, the Men's Basketball team pulled away from North Texas last night, 67-58 in a great defensive performance. More from actioncuse later. The team is also off for Christmas.

The SEC announced this week that the Baseball Championship Tournament will expand to 10 teams this year and remain at that size with the addition of Mizzou and Texas A&M next year. The Tourney will start on Tuesday's now, and while it remains double elimination until the semi final round, a loss in the opening round means that a team would face the daunting task of pitching and winning everyday for the next 5 day, playing six straight days.

The SEC, in an interview with itself, believes the change will help it secure 10 bids in the NCAA tournament, while SBN Atlanta sees the move for what it is: a cash grab. Coach Mainieri, in an interview with Tiger Rag Radio, sees it as something that could have helped LSU make the field last year and also believes that the SEC will not expand past the 30 game conference slate.

UGA has self reported some minor violations to the NCAA that includes Mark Richt paying his staff salary bonuses out of his own pocket after being denied their pay raises by the UGA Board. It's the kindest violation ever.

A few days ago the NCAA released the regular season attendance figures for all of D-1A [PDF] and the results are pretty interesting. Of all of the non-BCS AQ schools, only 7 reported attendance capacities (sold seats/ stadium capacity) of over 90%: FIU, USL, Boise St., Navy, TCU, East Carolina, and BYU. The worst performers of each of the BCS conferences were ACC: Miami, 64%; SEC: Vandy, 82%; Big XII: Baylor, 82%; Big Ten: Northwestern, 70% PAC 12: UCLA, 62%, Big East: USF 67%. Interestingly enough, LSU Baseball's cumulative attendance last season [PDF] of just over ~400K would be enough to rank it as a Top 30 football program, ahead of some notable programs like Virginia Tech, Oklahoma State, West Virginia, Ole Miss, UCLA, and Mizzou, to name a few.

In coaching news, Terry Bowden popping up at Akron all of a sudden means that there is only one HC vacancy in D-1A: Penn State.

It would appear the Big East mess is only just beginning, as now two members are discussing plans to break off and form a basketball-only league (wasn't that the point of the Big East in the first place?) Meanwhile, Navy would like to join the Big East, but wont be able to soon due to numerous scheduling contracts it has to work out. Speaking of, no one really knows where WVU will be playing next year.

In some wide ranging interviews, the PAC-12's Larry Scott sees a future with a single 72-team Super Conference, while Mike Slive still supports a plus one system he envisioned years ago, even if the SEC is benefiting from the current system, and Mizzou AD Alden and Chancellor Deaton discussed how they came to the decision to move to the SEC.

SB Nation has put out their own All-American team. It didn't have a space for Punter on the ballot, just a line with Brad Wing written on it.