We are quite light on news today, as everyone's been off for the last few days. The football team got right back to work yesterday afternoon (no doubt indoors due to the weather) and sweated out the "extra turkey and stuffing" they brought back with them. Miles hasn't really had anything of note to say in the last few press conferences, which is a good thing. He did mention yesterday that he doesn't really have to do anything to motivate the guys in practice, even after coming right back from a holiday break. The full presser is after the break.

Gunner Kiel was supposed to commit somewhere before Christmas. Then it was Christmas day, which turned into yesterday with still no announcement. The only thing consistent between all of the different recruiting "sources" reports is that they've all been consistently wrong, which probably means that none of them really know anything. Supposedly, his top choices remain LSU, Vandy, and Notre Dame, with a heavy lean to LSU. As soon as we hear something concrete, we'll be sure to post about it here, but there's nothing to say for now.

There is also nothing to say about the 2012 SEC football schedule right now. And I do mean ABSOLUTELY nothing. All reports concerning the schedule have all come from "sources" who've said all sorts of things like A&M and Mizzou getting some amazing home slates for their 1st SEC seasons and the opposite division draws being reduced to 2 teams instead of 3. As these are the same "sources" who said we'd have a full schedule released on Monday, I trust these reports as much as the Gunner Kiel rumors. Wait and see is the name of the game this week.

The Louisiana Sports Writers Association All-Louisiana Team was announced this week and dominated byt LSU as usual, with Tyrann Mathieu and Brad Wing earning the Defensive and Freshman Players of the Year respectively while Miles was named Coach of the Year.

The BCS is quite the pyramid scheme. Thanks to the Superdome remodel, the bands can no longer be placed in special sections on the field level and instead have to buy regular tickets for the BCS title game. Combined with the price of lodging and transportation, LSU and Alabama will spend nearly $1 Million combined just for their bands to attend and give the BCS a free halftime show. As of a few days before Christmas, ticket prices on the secondary markets had fallen sharply, but still remain at a $2000 average.

For his efforts against Marquette and North Texas, Ralston Turner was named SEC Player of the Week. The Men's team returns to action Thursday night against Grambling.

Finally, here for no other reason than I forgot to post it on Christmas, is Jolly Ol' Saint Miles (via @LSUShep10) 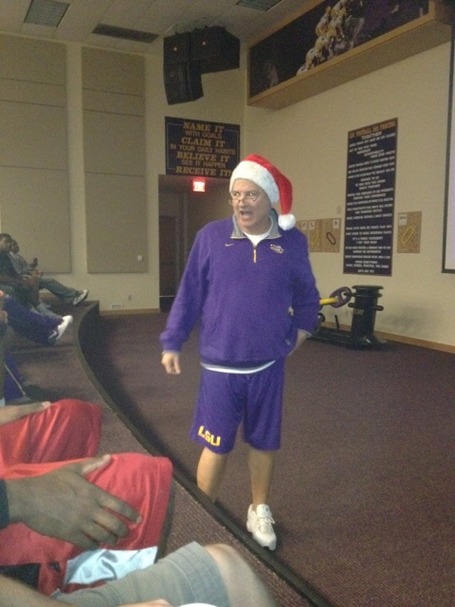