How Good is Gunner Kiel?

Share All sharing options for: How Good is Gunner Kiel? 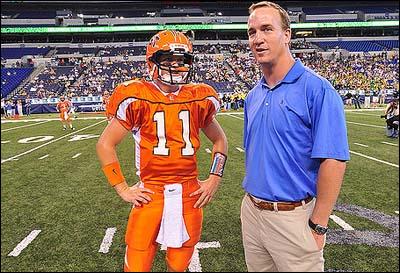 Is Gunner the next Peyton? Probably not, but who is?

Evaluating talent is difficult. Evaluating HS talent... remarkably so. There's a seemingly endless list of variables involved, most of which can also be said about attempting to evaluate college athletes as they transition to the NFL... except you are talking about 16, 17 and 18 year old kids who are born with smart phones and often believe they are entitled to any greatness they want. Really, they are just giant pains-in-the-ass.

Kidding aside, evaluating how a player will translate from one level to the next is often times 2 parts luck, 1 part skill. Sure, we can all applaud the genius of Les Miles when lightly recruited Mo Claiborne turns into a Thorpe-award winning, future top 5 NFL draft pick. But what about the (literally) dozens of lightly recruited players Miles recruited before this that never amounted to anything? Regardless this holds true no matter how regarded the players are. So how do we evaluate whether or not Gunner Kiel will be the "Peyton Manning" of LSU? Well, I'll my best after the jump...

More or less, a mixed bag. Of the 16 listed above, Edwards, Henne, Sanchez, Stafford, Mallett, Clausen, Gabbert and Barkley had successful college careers. The rest were pretty much consensus busts. That's a 50% success rate when it comes to predicting pro-style QBs. Of course, this is defining success as collegiate success, whereas Rivals often states their evaluations are set to reflect the players they believe will make the most impact at the next two levels.

All that being said, their track record is improving. Of the 8 success stories, 5 came from the last 4 years, with Crist and Gilbert still having some chance resurrect their careers (though not looking great). If Crist and Gilbert can turn their final years of eligibility into successful seasons and perhaps even be drafted, that would make Mitch Mustain the lone "bust" of the Rivals 5-star evaluations since 2006.

So, what does all that have to do with anything? Well, for one, notice that Gunner Kiel is the first 5-star pro-style QB since 2009. Rivals doesn't just label their top-ranked pro-style QB a 5-star. They are selective. Second, their recent track record of success tells us that the chances of Kiel being an out and out bust is likely 25% or less. In all likelihood Kiel, at the very least, will be a respectable college QB.

As a side note, there's still another round of evaluations to go for Rivals and there is a chance he could slip to a 4-star (which, by the way, really means nothing about his ability). But, my guess is Kiel will climb in the rankings after Rivals gets a week to put eyeballs on him throwing to elite wide receiver talent at the Army All-American game.

Now, that all the rationalizing and explaining is done, here's my best attempt at evaluating Gunner from a mental/physical/upside standpoint.

Mechanics: The thing I love about Kiel's mechanics is that not only are they textbook, he's remarkably consistent with them. He holds the ball up high and nice and tight. He has a nice, smooth, overhand delivery and the ball comes out of his hand "hot." His hips turn to his target as he throws and he has a nice follow through... all of which are what you are looking for in a player's form. His footwork is a little more difficult to evaluate since he takes 100% of his snaps from the shotgun, but he doesn't look clumsy or awkward with them. He will certainly have to learn to take drops from under center to play in our offense, but he should have at least a year, if not two, to work on that.

Arm Strength: Kiel doesn't have a Ryan Leaf/Jamarcus Russell legendary arm. In fact, he doesn't even have a Peyton Manning/Zach Mettenberger great arm. But his arm strength is definitely very good. I'd say he's pretty close to the realm of great, and he's by no means a "soft tosser." He shows the ability to fit the ball in tight spaces (more on this later). He can throw every route. A lot of people compare him to Andy Dalton, which I think is pretty decent. His arm is plenty good enough, but nothing anyone is going to go crazy about. What is most impressive about his throws though, is that, even at this young age, he understands touch. Kiel knows that a 5-yard screen doesn't need to be rifled, nor should a deep out be lofted. He shows a lot of ability to adjust the velocity of his throws based on not just the type of throw, but the type of defense he sees. This is a very good sign.

Athleticism: Watching him on tape reminds me of Andrew Luck. Luck isn't Cam Newton, but he's not Peyton Manning either. He can move around in the pocket, and even pick up 15-20 on a scramble every now and again. I believe the term they like to use is "deceptively fast." Kiel shows a lot of that. He can definitely move around some. Perhaps even enough to run some of the option game at LSU. But make no mistake, he's a pocket-passing QB.

Size: Physically, at this point, Kiel is listed as the same size Tim Tebow was as a Sr. in HS (6'3, 215). Tebow, by the way, was ranked 22nd overall in 2006, while Kiel is ranked 18th, currently. Kiel could certainly have some growing left in him, and while I don't think he'll ever be adding as much bulk as Tebow (since they are fundamentally different players), but there's always a chance he could spurt an inch or two. Chances are he'll likely finish around 6'4, 230 pounds, which is pretty much the exact size of Andrew Luck, i.e. close enough to prototype.

Mental Game: I've never spoken to Gunner, so I can only evaluate based off the dozens of articles I've read, but from all indications, this is Gunner's biggest strength. Rivals says he reminds them of Peyton Manning, which I can only guess they are comparing to his ability to read and understand defenses and virtually run an offense by himself. Again, much like Andrew Luck, by all accounts, Kiel is an exceptionally good student both in the classroom and on the field. Many felt he may even do what Andrew Luck did and place an emphasis on education over football (Vanderbilt was one of his three final choices). By all reports, Kiel is very advanced mentally as a player.

Upside: There's still plenty here. Sometimes players are tapped out by the time they finish HS, but I do think Gunner has plenty of room to get bigger and stronger. Time in the weight room as well as some tweaking to his mechanics (though he doesn't need much) will likely improve arm strength. I think the biggest aspect of improvement for him will be incorporating the under center game, learning his drops and perfecting his play actions and ball fakes.

Mentality: Like the mental game, this is more of an "educated" guess than anything I can sit and evaluate "objectively." On tape, when play's break down, he seems to have a knack for recovering and making something out of nothing. Several times the ball is snapped over his head, he scrambles to pick it up, scoops, throws and completes. I like that "headiness." I also think the fact that his uncle played QB at Notre Dame, his dad at Butler, should help. And considering the importance of his family in this decision-making process, I think that bodes well for the future. Additionally, many writers have commented on how fiercely competitive he is. I like that.

All in all, I really love Kiel's game. I attempt to be as objective as possible when I evaluate recruits and to my untrained eye, Kiel has the goods. Now, it should also be taken into consideration that the competition Kiel faces can best be described as "hot garbage." Kiel is a 5-star, and there are only 3 other 4-stars in the state of Indiana. Obviously this isn't the be all, end all, but it's not as if Indiana is exactly a hotbed of football recruiting. How greatly the level of competition will affect him ranges anywhere from significantly to none at all.

The fact that Kiel doesn't have to step on the field immediately LSU helps his cause. In fact, I believe that factored into his decision. At Vandy, he would almost be the de facto starter by the time summer hit. Even at Notre Dame, the cries for him would have likely been loud. I think Kiel knows his best chance to succeed is to have some time to adapt and adjust. Don't take that to mean he's "afraid" of competition or anything like that. It's just being reasonable.

To me, Gunner Kiel profiles as Andrew Luck. There's a lot of similarities between the two, and to some extent they even look the same on tape. Will he ever be as good as Andrew Luck? I'm not sure. But I do feel confident in saying that's his ceiling, and his floor is probably something like Matt Flynn/Matt Mauck. Though QB is often one of the most difficult positions to evaluate, Gunner is one of the "safer" prospects at the position. I honestly believe there's very little chance he's a nobody at the next level.