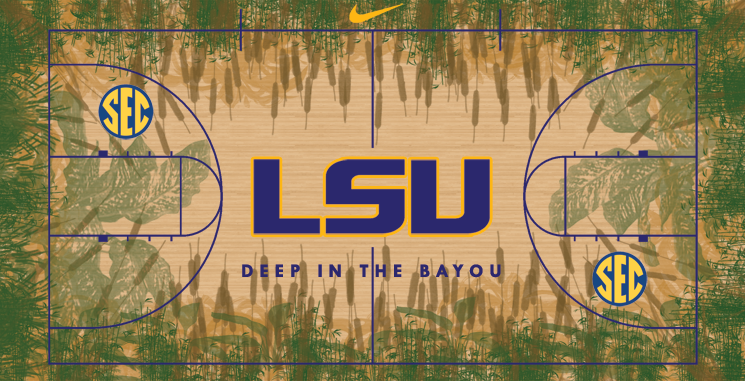 The above comes from an exercise by a design student who thought "What if other schools followed Oregon's lead in new court designs?" It needs work, and I think I'd much rather some sort of tiger stripe pattern, but I kinda like it.

With 1st pitch only days or hours away, the new posters and wallpapers are out for baseball and softball. Also, this years Baseball Media Guide is posted in full after the break.

DandyDon has heard from a source that the following baseball games have been picked up by Cox Sports for live broadcast. These dates have been confirmed on page 203 of the Media Guide

In actual baseball news, Mainieri is already doing some roster shuffling by starting FR JaCoby Jones at 2nd and sending Hanover to the Void at 3rd.

Softball starts this weekend in the clear but cold weather in Tiger Park with 6 games against Louisiana Tech, Bowling Green, and Purdue.

Important things to note from the Ole Miss game: 1. We shot the best we have since our last win. 2. D-Beck, Warren, and Turner had some of their best games of the season. 3. Stringer went 0-5 from 3 range. In better news, Johnny O'Bryant will play and some say might even start in the McDonald's All-American game at the end of next month. And the next 2 home games will be televised nationally on ESPN.

Safe travels to ActionCuse and everybody on the Student Govt. bus trip to Fayetteville for tomorrows game. They may beat the teams to the game as both Arkansas and LSU are snowed in in Mississippi.

A reminder from yesterday's announcement about ESPN carrying the spring game: Spring practice begins in ONE MONTH!

In the Bible Adventures version of the SEC, we are cast as Lot. Makes sense to me.

If there ever is an SEC TV network, I imagine Kicking it with Mike Slive would bean excellent late-night talk show. As it is, it's just the title to an interesting interview with the commish on a variety of topics, including a notice that oversigning is going to come up again at the Destin Meetings.

With the new TV deal with Turner and CBS, all March Madness games will be on TV in all markets this year.

Downer Budget News: You know it's getting bad when LSU is thinking of cutting some petroleum engineering degrees.