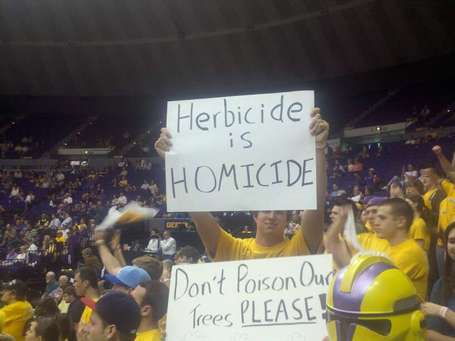 From last night, via the twitter feed of LSU Asst. AD Craig Pintens

We need more coverage of Women's Roller Derby: Here's a great profile of a team in Baton Rouge full of current and former LSU students.

It looked good early with a 7-0 run to start, but Bama chipped away until they got the lead just before the half and let us hang around for an eventual 67-56 defeat. Somehow we shot over 65% in the first half but were dead cold in the second. Add to that terrible FT shooting and Warren being in foul trouble for almost all of the second half and you've got our 9th straight loss. But, if the goal was to play spoiler for Bama's weak dance hopes, MORAL VICTORY ACHIEVED!

Johnny O'Bryant is also going to be in the Jordan Brad high school all-star game.

Rachele Fico is already at it again, pitching the 3rd no-hitter in school history on Wednesday in a 9-0 rout of SELA. Softball is at a tournament in Houston this weekend.

IT'S GAMEDAY! The Chalmation Sensation, Matty Ott is on the NCBWA Stopper of the Year watch list. Mikie Mahtook is on the Golden Spikes Award Watch List. Mock Brackets are out from Baseball America, College Baseball Daily, and ESPN, universally picking us as a 2 seed in a feeder regional. CBD's SEC West preview puts us 3rd in the division, but says Ott and Mahtook are the division's best players. Perfect Game says the Florida series and the Tulane home game are some of the must see games on this year's calender. Coach Mainieri's dad, Demie "Doc" Mainieri, is a candidate for the 2011 College Baseball Hall of Fame for his work at Miami Dade Community College North in the 1960's.The Daily Rev caught up with recent Hall of Famer Eddy Furniss. They've also got more on the connection between Mainieri and Lasorda. Saturday Night Slant has a good pitching and SEC preview. Here's Wake Forest coach Tom Walter talking about the outlook for his team this season.

The important Auburn news this week: Remember that story a few weeks ago about them having surprising success in Thibodaux, LA? Yeah, the NCAA is on the case now too.

In case you were wondering, here's the spring schedules for every D-1 football team (Duke has already started)

Maybe he knows something we all don't, but Cal's AD expects BCS contraction in the next few years.

I know we ain't friends, but I sympathize with Auburn fans over the Toomer's Corner poisoning. Just a horrible, horrible thing to do. But my god did it generate something awesome from LSUFreek.