YES! At long last Baseball has returned to The Box and GameThreads will be running every weekend and midweek game. I'm gonna stay with last year's format of half-inning play-by-play updates and I'm sure the usual suspects will be around to ice bros and drop a Pedro Cerrano reference every now and then. Remember that game threads are accesible from mobile devices, so it's a great way to check in on the road or comment from The Box.

There's no previous game to recap, so be sure to check out Poseur's excellent Pitching and Position previews. On the injury front, Mason Katz is still a gametime decision after a light shoulder injury and Fr. RHP Tyler Jones, who was going to be the Sunday starter, is out all weekend for a frontal lobe sprian that will have him in the stands all weekend. Spencer Ware will likely see some playing time this weekend. 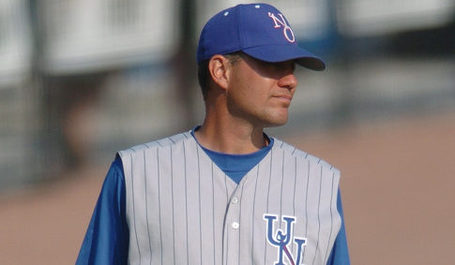 Wake Forest HC Tom Walter as we last saw him

Tom Walter is one of the better UNO coaches in memory, building a post-season contender and stealing a fair share of midweek games from us. I shudder to think what kind of offensive powerhouse might have been had fate not destroyed UNO's budget and forced a move down to D-2. There's no shame in bolting for a D-1 opening when your program is going away, and as we have seen Walter remains a class act.

He's in the second year of rebuilding a club that hadn't had a winning record in the not-easy ACC since 2006 and had fallen to a dismal 6-24 in conference in 2009. Last year's 18-37 (8-22 in conference) is a small step in the right direction, and I have no doubt Walter is on the road to success.

But Wake Forest isn't there yet. Players to watch out for include Sr CF Steven Brooks, who led the Demon Deacon's with 73 hits, 39 RBIs, and 6 HRs is also impressive in the field with a .992 fielding percentage.  Soph 1B Matt Conway returns as their leading hitter with a .382 BA on 58 hits, 32 RBIs, and 6 HRs. Conway is also one of their leading relievers with a .657 ERA and a 1-0 record in 7 appearances.

Wake is throwing all-leftys to start against our mostly righty batters, and from the stats below last year wasn't exactly kind. Friday night's Stadler led with 70 Ks, but their staff as a whole gave up 69 HRs and 550 hits with a staff ERA of 6.29.

With nearly half the roster either Fr or transfers, expect some opening night jitters from the Tigers as well as the Deacons. Tyler Hanover will begin the scientifically impossible task of escaping the black hole at 3rd and we wish him godspeed.

Friday Night is on Cox Sports with Lyn Rollins, Ronnie Rantz, and Ben McDonald on the mic. Saturday and Sunday are radio only on 98.1, and the dual basketball-baseball Sunday Noon start usually means "Hannigriff and The Coog" as the B-team