Share All sharing options for: Weekend Series Recap - Wake Forest: New Blood on the Mound and Mahtook Laughs at BBCOR

What a fine way to start the season. Gorgeous weather, giant crowds, veterans in mid-season form and rookies making great 1st impressions. It could hardly have gone better for LSU this opening weekend.

In a way over-packed Box, our only veteran starting pitcher RHP Ben Alsup started a season of Friday starts by immediately loading the bases. After Mainieri went out to calm his nerves, Alsup settled down and kept Wake off the board until the 5th. Meanwhile, the LSU bats played like they were swinging aluminium, getting 6 runs in the 1st and 6 in the 2nd by using timely hitting to single and double their way around the bases (with a nice single shot homer by CF Mikie Mahtook, more on that below). Realistically, the game was well in hand by the 3rd, with substitutions coming in the 5th. Middle relief RHP Nick Rumbelow had a rocky outing with a 9.00 ERA with 3 runs on 2 hits, but with no pressure he calmed down to eventually get 2 Ks in the 8th before giving way to RHP Kevin Berry who blanked the 9th. The bats added a second single shot HR by Mahtook and a few RBIs to reach the 15-4 final.

Saturday saw the first new starter on the mound, RHP Kevin Gausman. He came into the year with a lot of hype as the pitcher who didn't sign with the Dodgers. He impressed immediately, his fast ball hitting 98 MPH in the first few batters and drawing Ben McDonald comparisons from the radio booth as far as his potential. It wasn't a perfect start however, as that famous fastball didn't have a lot of movement  and Wake took advantage early, building to a 2-0 lead in the 2nd. Gausman settled down quickly, retiring nine in a row and getting 6 Ks before being sat down in the middle of the 6th, still hitting 96 MPH on the gun.

With a choice to make about the Sunday starter, Mainieri went with Fr. RHP Ryan Eades for middle relief. Eades had a decent  performance allowing 3 hits and a run through 2 and 1/3 innings, but it was a relatively quiet night for the LSU bats, gaining only a 4-2 lead going into the final inning. When Eades gave up a homer to start the 9th and put the tying run on, Mainieri decided it was time to win this thing. Matty Ott came in and got 2Ks and a ground out to seal his first save of the season and 28th of his career, one shy of tying the LSU career record. Ott looked to be his old self, feeding off the crowd energy to get that last K and the 4-3 final.

With the series locked up and Tyler Jones still in the suspension dog house, Mainieri went with Fr. RHP Kurt McCune on Sunday and got what turned out to be the biggest surprise of the weekend. McCune absolutely dominated Wake from the get go, striking out the side in the 1st and holding onto a no-hitter into the 6th (when Hanagriff casually mentioned on air that it didn't matter because McCune was on a pitch count, a single followed immediately.) It was another no pressure game as well, as the bats decided to take care of things the old fashioned way. 3-run bombs by Mahtook and RF Mason Katz led to a 9-0 lead before McCune was sat after 6 innings with 7Ks. Jimmy Dykstra and later Chris Cotton turned in great performances as well, making for a combined 13Ks for the pitching staff in a 9-1 win.

What to say about Wake? They looked exactly like we thought they might, a lower-to-mid tier ACC team in the middle of a rebuild. They played very well in game 2 and it was a genuine save for Ott to shut them down at the last opportunity with the tying run on 3rd. We'll keep an eye on them with the expectation they make some noise in the ACC this year. 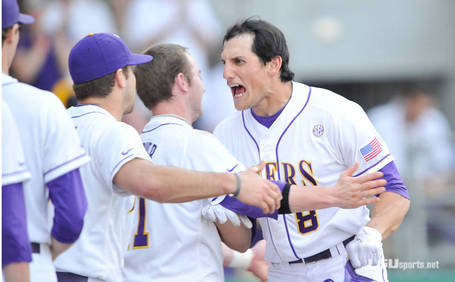 4 homers, including the 3-run bomb on Sunday. He also got the first intentional walk of the year, which put him on for Katz's 3-run homer. In a world where the NCAA is using any means necessary to tone down the offense, Mahtook is bringing the BOOMSTICK.
ATVS Pitcher of the Weekend - Fr. RHP Kurt McCune 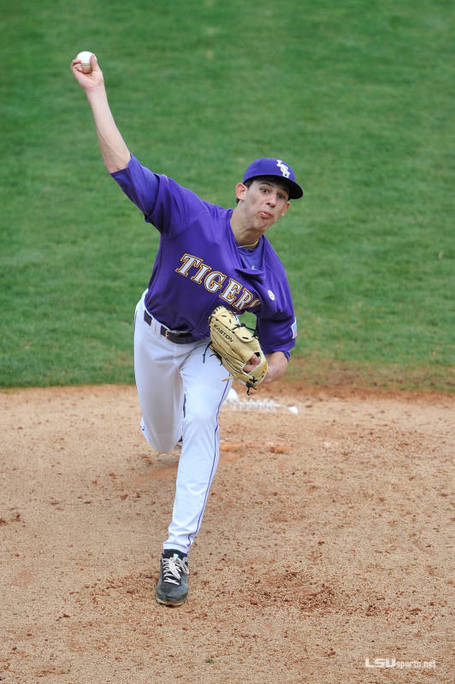 The guy who wasn't even supposed to be here today threw like a man on fire in what has to be one of the all-time Freshman opening weekend performances. A one-hitter through 6 with 7Ks is the kind of performance that gets you into the SEC rotation. Tyler Jones might have to fight to get his spot back.
ATVS Freshman of the Weekend - 2B JaCoby Jones 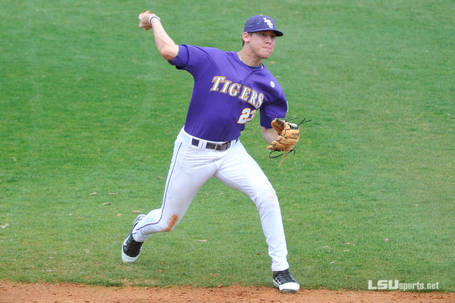 Between the 2, i'd give it to McCune, but since the rules I just made up say you can only win one of these a week, lets praise the premier performance of JaCoby Jones. Being the tallest guy who isn't a pitcher has it's advantages and the giant leap into the air for a liner a few feet over his head is a move that's sure to come in handy down the road. Being 2nd on the team in BA% won't hurt either.