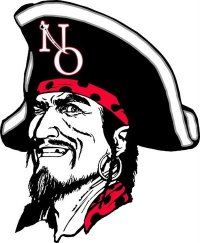 Yarrr, even though they be rudderless and stuck on a course for Davy Jones Locker, Lafitte's Baratarians continue to press on at the D-1 level this season, though they arrrrr long gone from the Sun Belt. Charting a course through all the Seven Seas, they have just begun a grueling stretch of nothing but away games until April 17th.

As I mentioned last week when discussing former UNO coach Tom Walter, the Privateers have stolen their fair share of games from us over the years, especially recently. Mainieri is 3-4 against his former team as the LSU skipper (he played at UNO for 2 years under the legendary Ron Maestri)

Tonight on the mound for LSU will be the fresh-off-suspension Fr RHP Tyler Jones who may have been the only one not enjoying last Sunday, as he had to watch Kurt McCune start in his place and have an SEC pitcher of the week performance.

Meanwhile relief pitcher Kevin Berry might be called on to face his former team after abandoning ship when the D-2 move was announced. Berry pitched just the 9th on Friday night.

LAST TIME WE MET: A 7-4 debacle against a horrible UNO squad in the middle of that heinous 2 week period where we got swept at Ole Miss and Florida back-to-back.

We are coming off a sweep, and the Privateers dropped 2 of 3 to Southern, including a 19-2 loss on opening night. So of course they are going to win tonight....