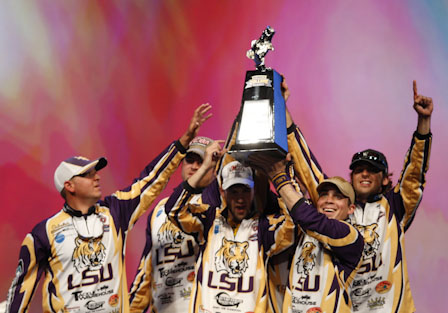 In our continuing effort to be the world leader in LSU Fishing coverage, we are proud to report that LSU spanked Bama by 8lbs at the weigh-in on Sunday night at the Bassmaster College Classic. Along with that awesome trophy, they get some prize money for their club and an automatic berth in next year's championship match in Lake Charles.

The good ship LSU came away victorious in yet another naval skirmish last night against UNO. Tyler Jones, at the helm for the 1st time after spending the weekend in the brig, successfully dodged the Privateer's opening shots. Then we wheeled around and unleashed a full salvo right into the Baratarian's main mast, gaining a 6-0 lead in the 1st. We continued to unload the grapeshot, with even Watkins getting a clean shot into their broadside, until we sent Lafitte's men to the briney deep with a final tally of 13-0. And that will thankfully be all for the nautical references until we drop anchor at Maestri Field on May 17. Video highlights after the break.

Mainieri gave out the pitching rotation for the weekend, sliding Alsup to Sunday and moving Gausman and McCune up to Friday and Saturday respectively. As it's Holy Cross, this is probably more Mainieri experimenting than anything else, but note that McCune, at least for now, is keeping his weekend job, while Tyler Jones stays on the midweek and walks into what may be the in-state game of the year against SELA.

Why SELA? After breaking the nation's longest hitting streak on opening night and taking a series from FIU, the Lions came home and obliterated Tulane last night, 13-1.

We'll know more as the season with BBCOR progresses, but the early numbers show HRs are down and doubles are up across the SEC already.

Cancel your lunch plans if you are in BR. Chavis and Kragthorpe are going to be at the TJ Ribs on Siegan recording an episode of Tiger Talk from Noon to 1pm.

We fall into the Trent Johnson supporters camp here at ATVS (though we have a funny way of showing it, I know) so think this over in your head: Trent Johnson's 1st 3 years at LSU are on pace with Mike Krzyzewski's first 3 years at Duke.

You gluttons for punishment out there should be ready at 8pm tonight to get you usual dose of pain, this time Live from Starkvegas.

Apparently every public defender in the state of Alabama went to Auburn.

With the PAC-12 currently negotiating it's new TV contract, here is a great analysis of what the outcome could mean for te rest of the college sports world.

HBO's Real Sports is looking into reports of paid players at SEC schools? Well, at least people will stop talking about oversigning....

You NOLA Hornet's fans out there are probably not having a good morning as former LSU G Marcus Thornton has been traded to Sacramento.

Stromile Swift was arrested on assault charges in Shreveport yesterday.