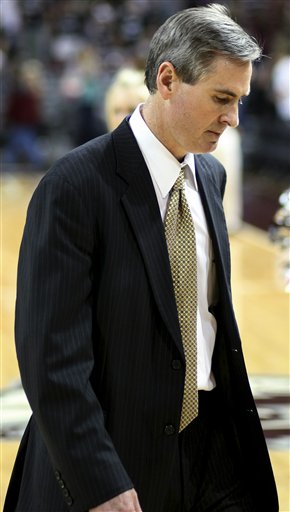 FINALLY! Someone else's coach gets to look downtrodden after an LSU game!

Look, I can only recap the second half because like most of you, I gave this team up for dead the same day as first pitch. But, alerted that we had the lead at half, I begrudgingly turned the game on to watch the second half.

A 4 point lead at the half grew to as much as 10, but MSU found a way to get open for some gut-check 3 pointers just as we started to cool off. It was tied at 77 with 1:30 to go when Ralston Turner took a horrible 3 shot and I though I was living the nightmare again. But they didn't quit, scuffling for 2nd, 3rd, and 4th chance rebounds and layups.

It sounds cliche, but what impressed me most was the fight I saw in the team. Scraping on D to force turnovers, and working hard down in the paint to make the shots and rebounds. Even when some calls didn't go their way (and there was HORRIBLE officiating in this game for both sides in the second half) the Tigers for the most part just bit their tongue and kept fighting anyway. They rebuilt a small 4-point lead and held on just long enough for the victory.

The impressive stat line of 8 for 14 from 3 in the first half brought them back from an early 13 point deficit all the way back to a 4 point lead at the half. We went cold from long range for the remainder to end up in the usual 30% range at 9-23.

We won the turnover battle (10-18) and were an impressive 79% at the FT line, but the difference was bench play. There were 5 Tigers in double figures for the night, none more important than the 14 for Garrett Green and 16 for Aaron Dotson who were both coming off the bench and each played more than 20 minutes.

So, 3 or 4 SEC wins is still one of the worst seasons in LSU basketball history, and we continue to be told that things will be better next year, but maybe we can go into next season with just a smidge more of that Ol' Delusional Optimism. A Vandy win will still be a miracle, and UGA's going to be tough. Even Auburn is showing signs of life these days, but I think 1 more win and a doubling of last season's SEC win total is possible. Even in a sport I say I don't care about, toughing it out for a win still feels good.

Video highlights after the break.