Looking back on this series, it's very hard to judge if anything useful can be determined from the Tiger's sweep of Holy Cross. The Crusaders weren't just starting the season a week late, they were playing outdoors for the first time all year against a team that had already spent a month scrimmaging. It was easy to see that disadvantage affecting them on the field as they spent the weekend miss-judging fly balls and making fielding mistakes. The 8 errors they committed, especially the 3 in the LSU 4th on Sunday, were directly responsible for turning somewhat competitive games into blowouts.

Not that LSU was trying to run up the score. For most of the weekend, Mainieri was content to play the dreaded small ball, and to great effect. We can safely say that about half the starting lineup can lay down a successful bunt and that we aren't afraid to do it. The four stolen bases on the weekend are also going to go a long way towards keeping the opposing pitchers honest. The Long Ball didn't disappear either, with 4 for the weekend and keeping alive a streak of at least one every game for the season. Mainieri's mantra through most of the preseason was that we will have to "Manufacture offense" this year instead of relying on the long ball to bail us out. From what we've seen so far, LSU has that ability.

The pitching felt a little uneventful despite the lopsided scores. Gausman looked fine to start on Friday, then gave up a 2 run homer in the 2nd. He settled down for a good night though, with 7Ks through 6 and his first win. McCune wasn't as stellar as his pitcher of the week premier, but he still gave a great performance of 3Ks, 4 hits, and 2 runs (both off a homer in the 2nd) through 6. Alsup was fine on Sunday, but he did have to work himself out of a bases loaded jam again. The overriding theme of the weekend seemed to be good pitching, backed up by great fielding defense (with a small exception behind the plate, more on that below.)

The relief pitching got the job done despite the complete lack of pressure. Berry and Rumbelow were lock-down on Friday while the rest of the pen gave up just a run or two in junk time on Sat. and Sun. The only worry I have is that no one but Ott has faced anything even remotely close to a pressure situation. It's a great problem to have, but forgive me for being nervous when everyone's first save opportunity comes against Fullerton in a few weeks. 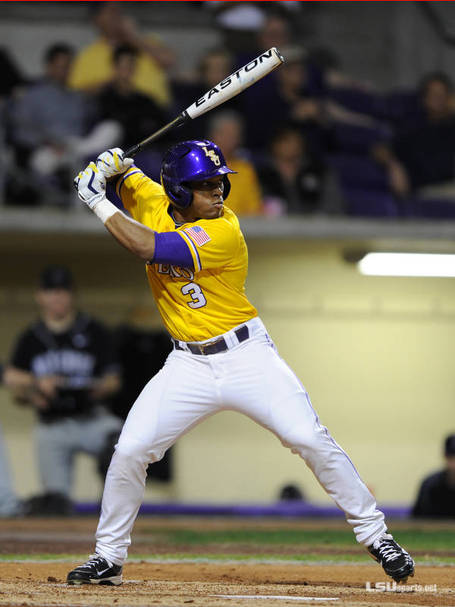 A 2 run homer on Friday, 3 RBIs on Sunday, a couple of stolen bases and getting HBP 3 times signals a return to early 2010 form for Watkins. Some stellar work in the outfield as well including that great diving catch on Saturday.
ATVS Pitcher of the Weekend - Kurt McCune
Hard to chose anyone other than the starting pitcher who had an ERA of 1.00 (no picture of him this weekend)
ATVS Freshman of the Weekend - JaCoby Jones 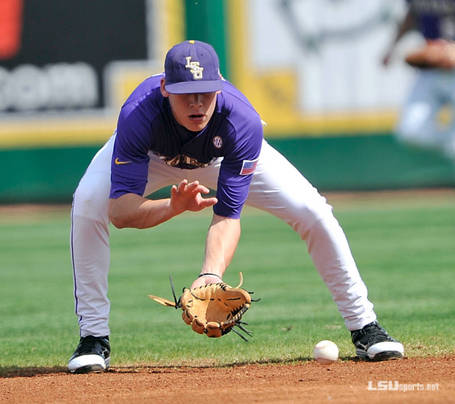 Until someone gets hurt and we start seeing some subs, this will just be between Jones and Ty Ross (when he's chosen to be behind the plate). Not that Jones Isn't deserving. His fielding work at 2B remains perfect and he's leading the team in BA, Slugging, OBP, and is tied for the hits lead. Still, I think I might hold off on this award next week unless something big happens