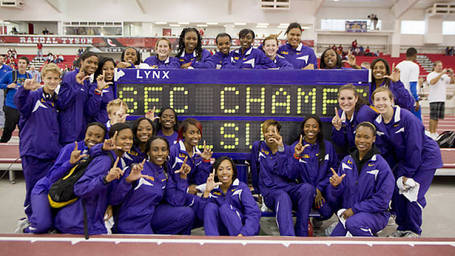 Women's Track and Field dominated the competition at the SEC Indoor championships to come away with their 23rd SEC title. The Men came in 3rd, led by Walter Henning's 3rd straight 35-pound weight throw title.

Same story, different week. LSU gets as much as a 7 point lead is holding on by 2 at the half, only to get run out of the building by Vandy, 69-90. The one good stat is Storm Warren's career-high 24 points.

RBR has a preview of SEC tournament seeding, looks like our first round game will be against this Wednesday's opponent, UGA .

AD Joe Alleva will spend the next 5 years on the NCAA Men's Basketball Committee, which handles tourney team selections among many other duties.

The Advocate looks at what should be the real worry with LSU football: Replacing greatness at all 3 levels of the D.

LSU is one of many schools that has a QB problem to sort out this spring.

There is yet another article on oversigning out today, this time in the Wall Street Journal and this time featuring quotes defending the practice from Nutt, Spurrier, and Petrino. LSU's issues are briefly mentioned and Odell Beckham gave his thoughts on the matter from a parent's perspective.

Baseball rankings have us anywhere from #7 to #19 this week.

In a poll of coaches, Alex Box Stadium is the best environment in college baseball by a 62% margin. Mainieri was voted in the top 10 of best coaches at a BCS school.

Photos have leaked, giving the world it's first look at a mascot that will never be as awesome as Admiral Ackbar.

Even thought the Falcons are actively negotiating for a new open-air stadium, the SEC went ahead and re-upped their contract with the Georgia Dome for the SEC championship game through 2017.

The Cam Newton tale continues to turn, with fresh allegations that Cam was in the room as his father asked for money from Miss. St. Which might leave Auburn holding the bag, even though they would still be an innocent bystander in all this.

In other Alabama conspiracies, now that it looks like the Toomer's trees might make it after all, Bama fans think the whole story WAS A DECOY PAAAAAAAAWWWL! And they are already calling into question the legitimacy of that forthcoming HBO special.