Clash of the Titans (sorry)

Share All sharing options for: Clash of the Titans (sorry)

"It'll be nice working with some proper villains again." 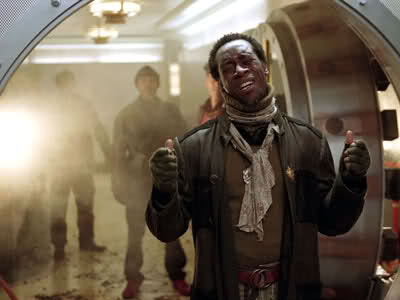 Now that LSU has made it through the daunting gauntlet of its early season games, now comes the first true test of the season: the Titans of Cal State Fullerton.

I've argued before that LSU are the modern day Yankees of college baseball.  If that's true, then CSF are the Cardinals at the very least.  In the past ten years, Fullerton has missed going to Omaha only three times. In all of those three years, Fullerton was eliminated in the Supers (including last year by UCLA).  This is a team that since the field expanded to 64, has only once failed to make the Supers.  They "only" have one title this decade, but it keeps the other three national title trophies company.  They are an even more regular occurance at Omaha than LSU.

People, this is college baseball royalty.

I hold Fullerton baseball in the absolute highest regard and could not be more excited that LSU is hosting this series.  This is the first time these two powerhouses will play in a regular season series, and really, it's about damn time.

Fullerton lives up to the mantra of Anyone, Anywhere, Anytime.  They've already played ranked teams in UNC and TCU.  Their non-ranked opponents?  You know, bottom dwellers like Long Beach St. and USC.  For Fullerton, this series is no big change in the quality of opponent.  They have seen, and beaten, high caliber opponents already.  LSU?  Well, we swept Wake Forest.

As always, Fullerton boasts incredible starting pitching.  All three of their starters currently have an ERA south of 2.00.  Noe Ramirez, one of the best pitchers in the nation, has struck out 21 batters in 21 innings pitched.  Yeah, that's good.  Colin O'Connell has an ERA of 0.82.  Oh, did I mention their closer, Nick Ramirez, also has an ERA below 2.00?  The team has a 2.09 ERA and has allowed an opponent's batting average of .217.  Folks, they are awesome.

So what's their Achilles' heel?  How have they even lost a game?  Well, as usual, they have a fairly pedestrian offense.  And by pedestrian, I mean bad.  They've only scored 49 runs in 11 games, and that's no fluke.  The team has a brutal 267/353/338 slash line.  That's right, they have a higher team OBP than SLG.  They have 20 sacrifice hits, nearly two a game, giving up outs for an offense that already has a problems not making outs.  And then, they have been brutal on the basepaths.  The Titans are 15 of 29 on stolen bases attempts, barely above 50%.

The middle of the order, particularly Anthony Trajano and Richy Pedroza, is dangerous.  But the bottom of the order is particularly brutal.  LSU needs to punish the poor hitters in the lineup, take the outs Fulelrton gives them, and hope our catchers learn to throw runners out (2 for 12 on the year).

I don't believe LSU's numbers right now due to the quality of competition, but I think it's fair to say we have a powerful lineup and good not great pitching.  So the teams will match power against power, our hitting versus their pitching.  Two of the very best programs in college baseball over the past 30 years, finally meeting in a regular season series.  It should be epic.  I'm absolutely giddy about this series.

They say great pitching beats great hitting.  Maybe that's true.  Here's a chance for them to prove it.