Away game, so no pictures this week. Video after the break.

This is not how it was supposed to go. Coming off a sweep against top-ranked Florida and one of those in-state mid-week losses that always happen every year, this was supposed to be the weekend to right the ship. On the road in the SEC is never easy, but we couldn't ask for better than the only SEC squad with a losing record. Friday started the weekend off right, but falling back into old habits on a double header Sunday led to LSU dropping it's second SEC series.

On Friday, Kurt McCune turned in a masterwork performance, being the 1st LSU pitcher to go the full nine this year. It was a relatively quite game as LSU built to a 2-0 lead in the 2nd off a sac-fly tag and a solo shot by Mason Katz. It took the Dawgs until the bottom of the 5th to even the mark and LSU immediately responded with a 2 run homer by Mikie Mahtook that was far up the giant hedges they have past the walls at UGA. It stayed that way until the top of the eighth, when Austin Nola singled with 2 on to score 1 runner. The ensuing throw to home got away from the catcher and with no one backing him up it allowed Nola to come all the way home on the play, making it 3 runs on the single. McCune then had is only shaky inning of the night, singling on the first two UGA batters in the bottom of the 8th and allowing 1 to score on a pop fly. Still, with a comfortable 7-3 lead, Mianieri let him go out again in the ninth with relief already well-warmed in the pen. McCune only allowed 1 more hit as he shut down the Dawgs for the win. On the night, he allowed 3 runs on 6 hits with 7Ks and just one walk.

A side note on Friday: That was easily the oddest TV crew I've seen cover an LSU game for years. Between the terrible play-by-play call, weirdly wrong pronunciations, and interviews with just about everyone currently working in UGA Athletics (they interviewed a TWIRLER for crying out loud!) I nearly switched over to radio a few times during the game. The one saving grace was John Smoltz in what may have been his first professional broadcasting job as a color man since retirement. His Bobby-Cox-hindered opinion of pitch counts aside, I was mildly surprised at what he brought to the broadcast, especially the way he analyzed both pitching staffs. I would expect to see him on the fast track to the booth for some of the Braves regional coverage if he decides to pursue it. (Let me say here that I've watched maybe 1 inning of Braves baseball in the last five years, so if this is something he's done before, I wouldn't be surprised)

Saturday was a rain-out from the moment the radio crew came on, so LSU got it's first taste of a Double Header. Not that there is much you can do about it, because these games have to be played, but I dislike double headers especially with the short 30 minute break that the SEC allows between them. Every coach has a line about how you have to compartmentalize the games and be ready for a whole new ballgame no matter what the previous outcome. But I always find that the second game tends to be a continuation of the 1st with just a reset of the scoreboard.

Game 1 started with a disastrous 2nd inning for Kevin Gausman as he gave up 6 runs on 6 hits and an error before getting out of the inning. The Tigers quickly responded with a 4 run 3rd inning to cut the lead to 6-5, But UGA would keep swinging, getting 3 more runs, 2 off of Jimmy Dykstra and one off Kevin Berry in relief. UGA's Palazzone pitched a fine game, the LSU 3rd not withstanding, and stayed in to get the 7 inning complete game. In Game 2 with the series on the line, LSU played very sloppily, recording 4 errors, 2 of them on fielding errors by Trey Watkins who was pulled in the 4th. Ben Alsup didn't really have a bad outing, giving up 3 runs on 3 hits with 3Ks, but the errors kept killing any momentum he had on the mound. LSU would cut it to a 3-2 lead in the 4th on a monster solo shot over the hedges by Mahtook and an RBI single on an UGA throwing error, but the Tigers were unable to gat any more home, leaving 8 men on base.

It really felt like this series was just more of what we saw last week, bad fielding and an inability to get folks home. It's a young team, and unfortunately they waited until the conference slate to start playing like one. I don't want to start panicking, but when you drop a series to the worst team in the league (literally the only SEC team under .500) it's time for a gut check. We are last in the division but have yet to play an SEC W team. Turning things around against Ole Miss at home this weekend is critical to keeping us in the race, not to mention keep us from falling out of the national polls. 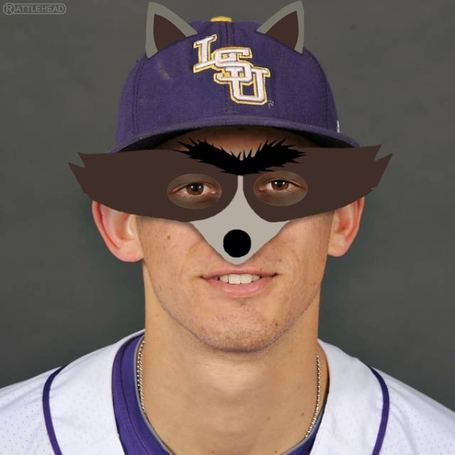 Easy one this week. McCune recorded the 1st 9-inning complete game for LSU in nearly 2 seasons and is now our best starting pitcher. Amazing when you remember that he wasn't even going to be a weekend starter.(H/T to WatsonTiger and his mad meme creation skillz for the above)

Not just for the 2 home runs on the weekend, but for the work he does trying to motivate the team. Mahtook is one of those players who gets excited about every good thing that happens in a game and he's going to make sure everyone else is as pumped up about it as he is.