Share All sharing options for: Understanding the Jerrard Randall Situation 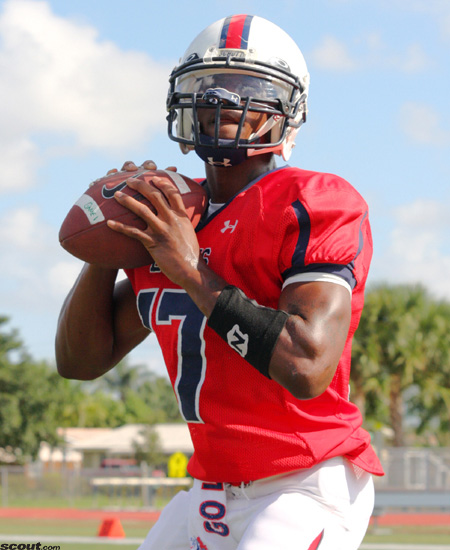 Over the weekend, LSU scored a big time commit/signee in 2011 Hollywood, FL QB prospect Jerrard Randall. As Billy commented, it's not often you land a player of this caliber, this late in the game, particularly when said player wasn't a major target around National Signing Day. Don't get me wrong, LSU recruited Jerrard Randall throughout the season but his commitment to Oregon and grade issues all but ended (or so we thought) the probability of flipping him. A month later, Randall is left shopping for a school, LSU came calling and here we are.

So what does this mean for LSU? What's the real story with Randall? Is it smart for LSU to assume the potential risk? What type of player is Randall? Is he simply Russell Shepard 2.0? Is he Ryan Perrilloux 2.0? I'll try to answer some of these questions after the jump.

The real story of Jerrard Randall is likely one that will only remain within a tight knit group of people. Here is what we do know: Randall was a heavily recruited athlete from South Florida. He boasted offers from Oregon, FSU, Michigan, Nebraska, and West Virginia amongst others. Rivals ranks him as a 4-star prospect, and no. 10 overall Dual-Threat QB. He committed to Oregon in June of last year and remained committed throughout his senior season. Come National Signing Day, Randall's academic standing came into question, his offer to Oregon evaporated and the Ducks cut ties. This cutting of ties forced Randall to explore his other options. LSU, who continued to recruit other mobile QBs even after receiving pledges from Zach Mettenberger and Stephen Rivers, opened their arms to Randall, and he returned the favor, signing just last weekend.

As far as I can tell, these are the only verifiable facts regarding Randall that exist. Otherwise, there's a remarkable amount of rumor and innuendo surrounding him. I've seen some allege that he played for four different HS teams in four years and use that as a mark against his character. I've seen a rebuttal to that argument suggesting that many, many players in South Florida flip schools throughout their HS career for a variety of reasons. Some reports indicate that Randall achieved a score good enough for him to qualify at Oregon, but was perturbed by their lack of contact and thus began to look around. Others say his scores, while good enough to get him into a handful schools, still weren't satisfactory for Oregon. Again these are some of the many rumors flying around regarding Randall's status, and the reality probably falls somewhere in the middle of it all. It does appear that Randall's commitment and signing with LSU was contingent upon impressing coach Miles, and not with athletic ability, but character.

So what's the rationale for LSU? As I mentioned above, Miles and company remained in the thick of the QB hunt late into the recruiting process. It became apparent they were definitely interested in bringing in another guy, particularly one of the dual-threat variety that could offer some flexibility (guys like Teddy Bridgewater and Dak Prescott remained targets). When none of the guys came on board, LSU went into NSD content with their haul.

However, just taking a look at the depth chart, the lack of options became apparent fairly quickly. Before Mettenberger came on board, there seemed to be a likely possibility that Stephen Rivers could be our starting QB in 2012 (a daunting thought, and one of many reasons why Mettenberger's pledge was so important). That's not intended as a slight on Rivers, more as a statement of fact that he's a developmental prospect at the position. Even with the signing of Mettenberger, LSU would only have two schoalrship QBs in 2012 on the roster, which puts them one injury away from a nightmare scenario of Rivers + whatever true freshman we take next signing class. In short, Randall takes us from a dearth at the QB position, to a near surplus. The pressure to sign a top tier QB in 2012 is now significantly lessened (trying to find one guy is hard, trying to find two, nearly impossible).

Additionally, Randall is a superb athlete. Watch his tape, and you see a guy that is devastating with the ball in his hands. If he doesn't work out as a QB, there's certainly potential for him as a WR or even a RB.

However, that does not mean he is Russell Shepard 2.0. I think most of us believed Shep would be given an honest chance at QB when he arrived on campus, and regardless of the debate of whether or not he got an "honest" shot, he made the move to WR. Shepard's arm strength and overall throwing ability were routinely scrutinized as a prep athlete, and it showed in camp when he arrived. So what makes Randall different? Just watch him throw the ball. The ball flies off his hand easily and naturally. He's got a smooth, over the top delivery, and arm strength that's probably comparable to both of the QBs who lead our team last season. Don't get me wrong. I'm not saying he's Peyton Manning with Mike Vick's legs. His throwing is a work in progress. But his pure physical attributes and feel in the passing game are far more advanced that Shepard's at this stage of the game.

As far as numbers go, this only means you can thumb through the current LSU roster and expect one more name to not be there next fall. Assuming Randall is, in fact, qualified, he'll be here in the fall, and someone else will not. There's no two ways around it. This also puts to rest any lingering thoughts that Jeremy Hill may sneak in this fall (though I think most agree that was done for once the lawsuit came about).

Going forward, we expect to see Jordan Jefferson as the starting QB in 2011. After this season, both he and Lee graduate, and the era of Mettensavior begins. If we assume he locks down the starting position for two years, it provides some nice spacing and time for Randall, Rivers and whoever else to develop and be prepared to start in 2014.

Could this be Ryan Perrilloux 2.0? It's not an entirely unreasonable question to ask. Miles repeatedly extended Perrilloux grace, despite his constant indiscretions. In many ways, Miles name was staked to the success of RP. I'm not sure he'll be so invested in Randall. I also think Miles learned his lesson from RP... that you simply can't trust the most important position on the field to a guy with character issues. The RP debacle cost (and is maybe still costing) LSU multiple years, in which Miles endured intense scrutiny. Seems as if he would know better than to put himself through that again. If Randall slacks in the classroom or proves to have other issues, Miles should have a short leash.

Overall, this is a worthy gamble. Debates about oversigning aside (guest commenter alert!), Randall is a fabulous athlete that gives us some much needed depth at the QB position. Questions about his character will likely continue, but they seem to either be a) unfounded or b) people making a paradoxical leap of faith from one issue (academics) to another (poor character). Is there risk involved? Surely. But much like a double-reverse to the TE on 4th down, it's methodical, and planned. Just the way the Hat would have it.