The merciful end is finally here. Well, nearly here anyway. We still have at least one SEC tourney game to play.

Today was supposed to be a day of history in the making, the day when Auburn would have the opportunity to set a new record of the lowest RPI of a BCS conference team ever. LSU sits at 206, Auburn at 264. The record to beat was 269, set by Oregon St. in 2008. However, in the intervening weeks since this was first noticed, Auburn has managed to scrape up 3 SEC wins, including last time out v. Ole Miss, and another BCS team has falen behind us both. 8-22 Wake Forrest has slipped behind Auburn at 266 and faces a certain defeat at the hands of Boston College at noon today. I'm not exactly sure how the RPI of any of these teams is effected, but the jist is that this game went from a historically horrific spectacle to just another bad basketball game. The loser is the worst team in the worst division in major college basketball, the winner merely gets their tourney spot to be at Noon instead of 9pm next Thursday.

Sure we beat Auburn last time, famously holding them to 6 points at half-time before suffering an epic collapse down the stretch. But that was ages ago. Can you tell me without a doubt that we will beat Auburn? How much would you really wager on that?

It's not senior night because we have no seniors. It's Mardi Gras break at LSU until Wednesday. Many of the parades in town have pushed back start times to avoid the weather. And Saturday's baseball game starts at 7pm. We'll be lucky if 1000 people turn up to this one.

Game is on FSN locally, and ESPN3.com outside of the blackout area. 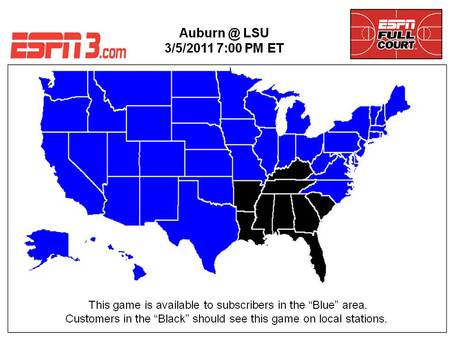