A terrible weekend to play baseball, but then they can't all be 70 and sunny.

Friday under off and on rain saw LSU put things away early, taking a 6 run lead in the 3rd and never letting Princeton get close. Kurt McCune's lone bad inning in the 3rd where he gave up 2 runs on a bases loaded RBI single can be attributed to the playing conditions. The rain had really picked up in the early part of the inning and McCune had some serious control issues, loading the bases with 2 HBPs and a walk. It's not too big of a concern for now, but it is something that needs to be looked at. We play in the SEC after all, and he's going to have to pitch in the rain again eventually. Only 3Ks on the night, but he held on to his team leading ERA of 1.47 and would be your presumptive Friday starter.

At least until Kevin Gausman started on Saturday. Rain and Mardi Gras sent away the crowds, and even more rain left little over 1000 in the box for the 9pm start. It didn't matter to Gausman, who proceeded to throw 9Ks and no earned runs through 6 IP, hitting 96 MPH on the gun on a cold and very windy night. In relief, Ryan Eades had a bad night, loading the bases twice and giving up a run before being pulled for Kevin Berry after 1 2/3 IP. LSU yet again put it away early and had taped the breaks by the 5th inning. Unlike the last few weeks though, there were no mass subs this weekend. The game lasted nearly to midnight and both teams seemed to just want to get home towards the end of the game.

Sunday was bright and cold for the Noon start, but it looked like LSU didn't get enough sleep. Ben Alsup started out fine and ended up with 7Ks through 4 2/3 IP, but some bad defensive play behind him led to 3 earned runs and him getting pulled early. Mainieri threw the kitchen sink in for relief, with Dykstra, Jones, Cotton, Broussard, and Peterson all seeing the mound in innings 5-8, but Princeton continued to slowly build to an 8-1 lead heading into the bottom of the 8th. Seeing Tyler Jones, the demoted midweek starter, come in was a bit of a head scratcher and it didn't do him any favors as he gave up 3 earned runs in only 2/3 of a inning of work before being pulled. It was a bad day at the plate as well as save for 1 run in the 3rd, LSU batters seemed to be waiting for someone else to get things started , often sending up just the minimum for quick up and down innings. Down 1-8 in the bottom of the 8th there wasn't any indication that things were going to turn around.

Whether Princeton got greedy with their relief or just weren't prepared for it, Relief pitcher Michael Fagan came into the bottom of the 8th after 3 fine innings of work and suddenly didn't know when the strike zone was. He walked 4 of five batters to open the inning and gave up an RBI single before being pulled with the bases still loaded and only 1 out. Alex Edward, Mike Lowery (in to PH for Snickeris), and JaCoby Jones all pounced on the new relief, laying down ground balls a scoring 4 more runs. Trey Watkins got on as the leading run due to catcher's interference on a line out to 1B, but Raph Rhymes grounded out to end the inning. Still, damage had been done and all of a sudden this thing looked winnable. Needing to make sure Princeton didn't get any insurance, Mainieri found a well rested Ott, who gave another masterful performance, getting 2Ks while facing 4 batters.

Batting in the bottom of the 9th for the first time all year, LSU got the gift of gifts in another new Princeton relief pitcher. David Palms, who we had seen earlier in the week, also couldn't find the strike zona and walked the tying and winning runs on. Following a sac bunt by Austin Nola to put the runners in scoring positon, Mason Katz was intentionally walked to load the bases with 1 out for Edward. Edward popped out and then Jackson Slaid came to the plate for only the 2nd time all year. He played Palms to a full count before sitting on a low and outside strike out pitch that both the radio crew and Mainieri disagreed on the call with. But the umps have never lost an argument about balls and strikes, so the game was over.

You can never say you are happy with a loss, but there is a lot of upside to the rally falling short. It'll wake the team up and remind them that you can't coast through a game no matter who you are playing. The monster 8th inning says we'll never be out of a game until it's over, but that we shouldn't wait until the last minute to get things going. And it gets that zero out of the loss column, which should remove any weird juju in a sport filled with superstition. Nobody goes undefeated in baseball, best to move on a get some better focus for the coming week. 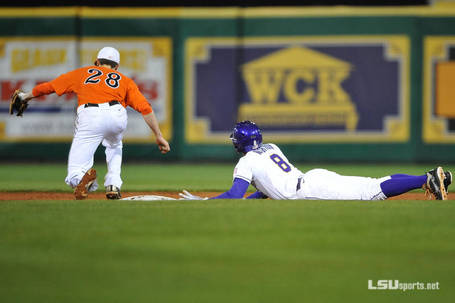 Tough choice this week, but I'll go with the easy pick of Mahtook. Sure he brings the power, but he has also proven to be a very alert and aggressive base runner this season, which is extremely important to out small ball game
ATVS Pitcher of the Weekend - Kevin Gausman 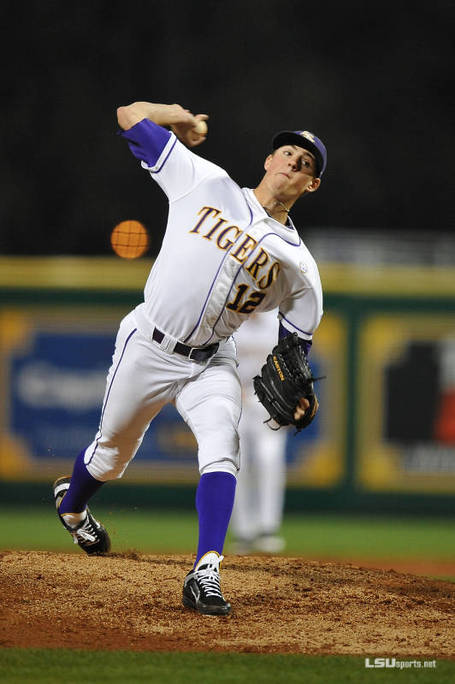 A great performance in the cold damp and wind that few saw or heard will not go unrecognized here. Just don't make me pick between him and Kurt McCune for the Friday starting job.
ATVS Freshman Newcomer of the Weekend - P Kevin Berry 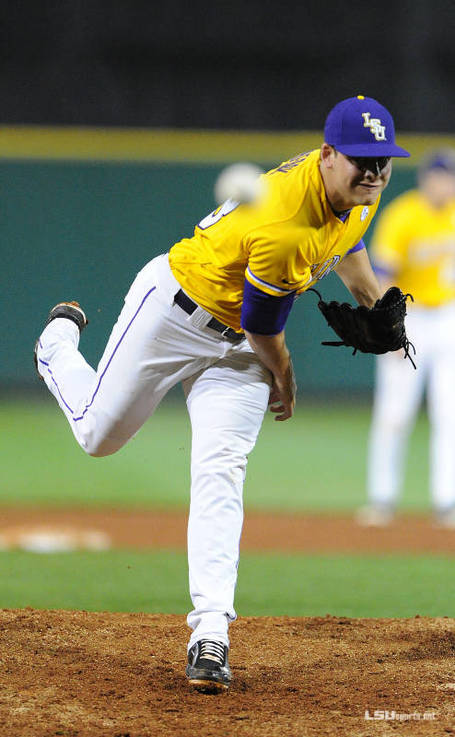 Title changed on a suggestion from last week's comments. I'll temper my "Matty Ott 2" hopes until he sees some pressure (and he will very soon) but from the early returns it looks like we got the best deckhand from Lafitte's crew (HEY-O Nautical reference)

BBCOR ERA HR COUNT: 14
BBCOR ERA DOUBLES COUNT: 32
PAID ATTENDANCE TOTAL: 127778
ACTUAL ATTENDANCE TOTAL: 76599
UNUSED TICKET TOTAL: 51179
(A rare 2nd Mid Week game, plus horrible weather boosted this stat up significantly this week. Expect a run in the other direction for the next 2 weeks with series against CS-F and #1 Florida likely to challenge attendance records if the weather holds)