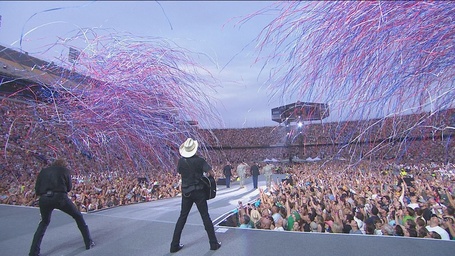 This is Scientifically proven to be the least offensive photo that exists of Kenny Chesney: facing away, on a stage in Tiger Stadium, during the National Anthem with Vets in front of him.

Up until this last weekend, it was easy to blame LSU's lack of success on factors nearly out of our control. Lack of timely hitting, 1 run games that never seemed to go our way, and new offensive strategies brought on by the new bats all seemed to contribute to our woes. But that did not happen this weekend. LSU was thoroughly dominated by Vandy on a level we don't often see. And starting the weekend in a critical position near the bottom of the SEC standings, the result may have permanently crippled any chance of post season play.

It wasn't exaggerating to say Vandy has a borderline legendary pitching staff this year. They combined for 24Ks on the weekend, allowing only 11 runs on 21 hits with Friday and Saturday starters Grey and Garvin having great outings. What we didn't expect was for all 3 of our starting pitchers to suffer nearly identical implosions as Vandy sliced and diced their way to 5 and 6 hit innings all weekend. Vandy showed that they were going to have their way with the battery from the very beginning, as this artist's rendering of the Bottom of the 1st on Friday shows what was not captured on camera:

Vandy batted around the order to get 5 runs on 5 hits, all of them singles, and never looked back, running away to an 11-3 win. LSU never threatened in this one, managing only 6 hits and leaving 7 on base.

Saturday started off hopeful enough, as a tight 1-1 tie lasted all the way to the bottom of the 6th, highlighted by Spencer Ware demolishing the Vandy catcher on a hit-and-run play at the plate (Highlights of this exist below and are now a required ingredient to any Spencer Ware Youtube Highlight reel from this point on.). Then things just stopped working for Kevin Gausman. 4 runs off of 6 hits, including a sequence of back-to-back-to-back RBI singles, gave Vandy a nice lead before Kevin Berry was brought in to snuff out a bases loaded jam. In the most questionable decision I saw of the weekend, Berry, who faced only 1 batter, did not return in the 7th, as Mainieri decided to go with Tyler Jones. Jones gave up 3 more in the 7th, and walked his first 2 batters in the 8th before handing the ball to Chris Cotton, who loaded the bases and gave up a 2 RBI double, leading to the 10-1 Final.

Sunday, with Vandy in their Team America gear and Ben freakin' McDonald doing PBP for a nationally televised audience on ESPN2, The Tiger started a little too aggressively, as LSU scored 1st, but ended the 1st and 2nd innings on failed steal attempts. It was a 1-1 tie again, but Ben Alsup only made it to the 3rd. 6 runs on 6 hits in the inning, all of it with 2 outs on the board. LSU would fight back to within 2, highlighted by a 4 run, 3 hit 7th, but Vandy continued to pepper the LSU staff, amassing TWENTY hits on the day en route to the 10-7 win and sweep.

Despite the late spark on Sunday, this was an utterly crushing series against a Top 5 team. We went in after last Sunday and the Pontiff game thinking we could turn it around, but instead we got ICED. It pains to say it, but LSU does not look like one of the 64 best teams in the country and is not deserving of a post-season berth. Not that we are likely to get one anyway, as it would be impossible to be selected as the #12 team in the SEC. Right now our focus has to be a little bit lower than the lofty goal of Omaha. Which brings us to the latest metric from your friends at ATVS Labs: 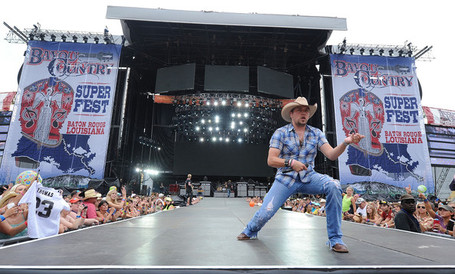 Last place is Last Place, and LSU stands 4 games out of even thinking about heading out of town Memorial Day weekend. Granted, it helps that we have the best possible schedule the next 4 weeks, playing the #11, #10, #9, and #8 SEC teams in what should have been a coasting back stretch but instead will be a panicked scramble in a must-win month. We need not just wins, but sweeps. Otherwise, we'll have to stay home and endure that lame Nashville midget and his hipster-country friends (Trace Adkins excepted of course, because I'm absolutely positive he could kick this blog's ass).

No PotW this week. It should be obvious as to why.

MAHTOOK HR COUNT: 10 (He hasn't hit one in about a month and still leads the SEC in the category)

Weekend: Kentucky (Special Note: This is a Thurs-Fri-Sat series to accomodate the ESPNU SEC Game of the Week on Thursday, a showcase of...the 2 worst teams in the league)

(No Highlights for GM1)