Normal sports news below, but first a PSA 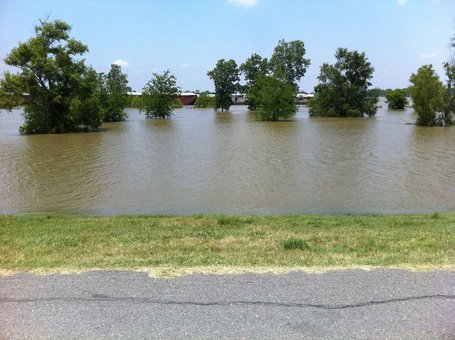 For reference, this is the same spot, looking back toward campus, with the softball stadium and Football Ops on the right and Death Valley just behind the trees at the end of the road. 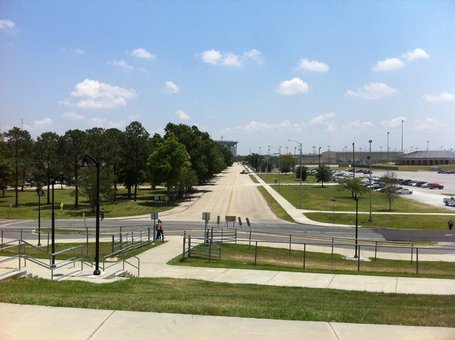 Both photos via LSU

With current projections stating the river will rise another 7 feet before cresting later in the month, even after the opening of the Bonnet Carré yesterday, the Corps of Engineers may have no choice but to open the Morganza for the first time since '73 or risk major damage to portions of Baton Rouge and New Orleans. For now, it's business as usual on campus, and there would appear to be little risk of anything happening before the end of finals this weekend.

It was another depressing meeting with the media yesterday for Coach Mainieri. With it came a quote that was very...grounded compared to the unflappable optimism what we usually hear from Coach.

We don't have the personnel we've grown accustomed to over the last few years. We need to upgrade. We need to hit the recruiting trail pretty hard. Who's fault is that? It's mine. I hate to degrade the kids. They're doing their very best. But perhaps we're asking some of them to do things they're not capable of.

He again denied comment about staff changes, but did say the entire program would be evaluated in the offseason. He also announced a new starting rotation for the weekend, with Gausman on Friday, McCune on Saturday, and Freshman midweeker Ryan Eades on Sunday.

LSU Softball, on the other hand, is riding high into the post season on a 12-game winning streak. The SEC Tourney starts on Thursday, all of it televised live on various ESPNs. You can check out the full bracket here.

The highest team GPA at LSU? Women's Tennis. The lowest? The big 4 of baseball, football, and men's and women's basketball.

Nine-time Pro-bowler, 1995 SEC Freshman of the Year, and LSU great Alan Faneca has announced his retirement.

The Horns at Barking Carnival wanted some advice about their new OL coach Stacey Searles. Paul was happy to oblige.

The WAC is close to announcing expansion candidates, including such powerhouses as Lamar and Utah Valley State. The big news is that McNeese is rumored to be an expansion candidate now. (Sure you don't want to join the Sun Belt, La Tech?)

When Sports By Brooks has a story with "EXCLUSIVE and "LSU" in the headline, it's usually time to panic. That isn't the case here, but it's still an odd story. Apparently the Board of Sups has been working on plans to honor Shaquille O'Neal, Pete Maravich, Bob Petit, and Seimone Augustus with statues around the PMAC. It's a well deserved honor for our 4 greatest players. Shaq, who's quietly donated millions to LSU for years, is reportedly against the idea, as he has been for many plans to name various buildings after him. LSU has gone as far as actually creating the statue (which is presumably hiding out in an AD warehouse somewhere with the old inflatable Mike costume and the last surplus boxes of 10-K mix.)

If Shaq is asking not to be honored, whatever the reason, then LSU should respect his wishes. I know why LSU wants to do it though: This statue is AMAZING! 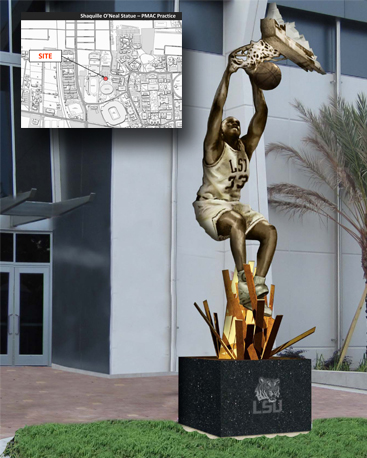 One last image for today, as new Women's coach Nikki Caldwell continues her charity run to Vegas. Admit it, you'd buy the same thing with your LSU signing bonus. 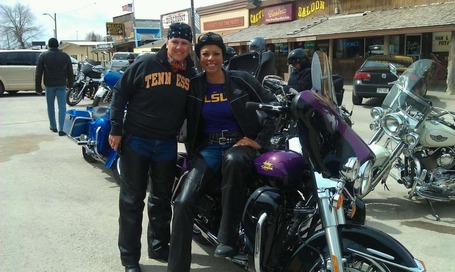