The series loss to Alabama was nearly catastrophic for LSU's postseason hopes, putting us firmly in the "Win and get help" category to reach Hoover. Good thing then that we are playing the 2nd worst team in the conference.

Much like LSU with bunting, The Vols have tried to compensate for the new bats with extremely agressive baserunning. They are 3rd in the league with 77 steals on 103 attempts and have 2 of the conference's top stealers in INF Khayyan Norfork and Andrew Toles. Norfolk (.360 64H 33R 37RBI 4HR 28K) is the offensive highlight at the plate, batting 2nd and playing SS after spending almost all of the season in the leadoff spot and at 2B.

In a year when we seem to be doing a lot of things for the 1st time since before Bertman, this weekend will see the first all-freshman starting pitching lineup in SEC play in program history as Ryan Eades slots in for Ben Alsup on Sunday. It's a helluva blow for Alsup, especially considering that Sunday is Senior Day, and he's the program cover story with the tagline Indispensable, but with no margin for error in the Quest for Hoover, the move had to be made.

As for the rest of the lineup, Katz will probably move back into right as is hand would have healed by now, and I can't decide either way about LF and 1B. We'll just have to wait for the pregame lineups.

We can't even become eligible this weekend, but we can head into the final weekend with the ability to play for a spot. Before last night it didn't matter who won the baseball Egg Bowl as long as the winner swept, so now we pull for StarkVegas. We are also pulling for a Bama sweep of Auburn to bring them into range. The rest of the matchups have little effect on our race, though a sweep of Ark by S Car would add an interesting 4th element to the final weekend's scramble. UF @ Vandy is going to be great, but ultimately inconsequential.

In the National picture, it's all just conference play. The Marquee matchup is the ACC showdown between #24 Miami and #2 Virginia. The Wahoos could reach 50 regular season wins if they sweep the next 2 weeks of play.

TV: Closing out the Box in style, the full Cox Sports team on Friday, Comcast Sports on Saturday (Cox Sports simulcast), and the Ronnie Rantz Jumbo crew on Cox 4 on Sunday.

Weather: Some strong storms earlier today, but it should just be cloudy tonight. Temps dropping down to the 50s this evening making for a cool weekend. As long as the levee holds.... 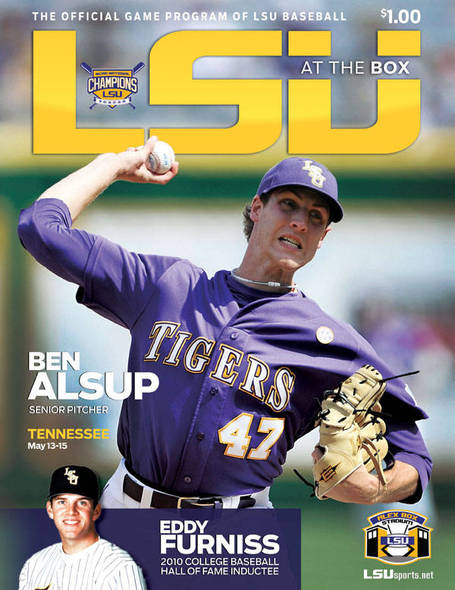