LSU took care of business solidly in the final homestand of the year, even earning enough breathing room to give a proper salute to the three Tigers who wont be with us next year. Meanwhile the playoff picture only got murkier in an absolutely log jam'ed West division.

Friday saw a dynamite performance from Kevin Gausman in the first complete game shutout since a Lewis Coleman game back in '09. He allowed only 4 hits and struckout 7 while putting down the last 13 batters in order. On top of that, Gausman finally pitched a game with some run support as LSU finally broke the scoring streak at 26 innings with a 3-run 3rd, highlighted by an RBI double from Mason Katz and Mikie Mahtook scoring from 3B on a suicide squeeze. Everyone but Ty Ross had a hit as the Tigers uncorked 17 hits on the way to a 9-0 win.

Kurt McCune in the Saturday role had a typically good outing, going 7 2/3 and giving up a single run but only notching 2 Ks. He was pulled in the 8th to start him resting early for the short week ahead and the brief outings by Joe Broussard and Nick Rumbelow were uneventful as they both saw the minimum. On offense, LSU took avantage of some galring miscues by the Vols, scoring 5 unearned runs off of 5 errors. The Tigers also kept slugging away at Vol pitching, getting another 16 hits but leaving 9 on base in the 8-1 victory.

Even though it wasn't a good outing, I like the idea of giving Fr Ryan Eades the Sunday start the more I think about it. Realistically, you'll need a 4th starter you can count on in the post-season (don't laugh) and we had to make sure he got some experience against better competition than the usual mid week fluff. Eades still has some work to do though, charged with giving up 5 runs on 4 hits and breifly giving the Vols the lead (though I would blame the last 2 runs on a shaky relief effort from Kevin Berry) before being pulled in the 5th. To that point LSU had only matched the Vols output and had really quieted down after a 3 run 1st, but the Tigers were able to turn it back on when they needed to with a 2 RBI double from Katz as part of a 3 run 5th.

Senior Ben Alsup came out of the pen to lock down any further offense from the Vols and LSU unloaded for a 6 run 6th, highlighted by Mikie Mahtook's 3-run homer which drew him out for a rare curtain call from the Alex Box faithful. Mahtook would get 2 more At-Bats the first being a prime example of his great play on the ground, getting on on a single, then taking 3B on a throwing error and stealing home on a WP. Meanwhile, with the lead well in hand, Coach Mainieri made some moves to honor the 2 Senior pitchers, letting Alsup record an out in the 9th, before pulling him for a 1 out appearance by Daniel Bradshaw, followed by Jimmy Dykstra to end the inning and Matty Ott to close the 9th. Mainieri also had 3 straight PH in the 8th, but Jackson Slaid managed to keep things alive with a 2 out double that allowed Mahtook a final encore at-bat, a pop out to deep center. Mahtook went out for the 9th, but Mainieri pulled him immediately for a final standing ovation in the 15-5 win.

The offensive output was extremely impressive, in fact the 50 hits were the most LSU has combined for in a weekend all year long. But again the optimism is tempered since it was against an even-bad-for-them Tennessee squad. The minimal stress on Sunday is as good of a gut check as we can stand at this point, as a West division race that has only gotten tighter forces the Tigers to play flawlessly in Starkvegas next weekend.

It's even more convoluted than last week. All six teams in the West can tie for the division crown or be left out of Hoover all together. There are literally dozens of scenarios for how the West could turn out, but for LSU it's fairly simple. A sweep gets us in guaranteed, anything less and Mainieri is the guest of honor at the Superfest. There is no margin for error whatsoever.

*Miscount last week on my part, the old record was 13 by Michael Hollander in 2007

**Does not include incentive for Championship, appearance fees, camp earnings, or other income that brings Mainieri's take home pay closer to one million dollars 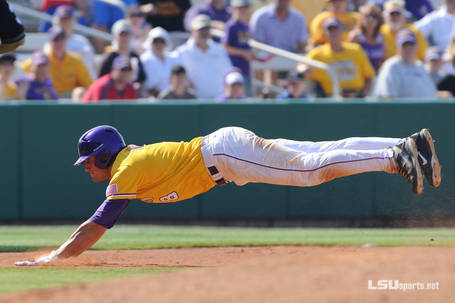 As if it was going to be anyone else this weekend. Mahtook got over a bad weekend at Alabama to have a fantastic final weekend at The Box, going 9 of 14 with a triple, a stolen base, a 3 run homer, and 6 RBIs

No Picture from Friday unfortunately

Finally, Gausman has a great outing with some run support. His 4 allowed hits is the lowest total for a single LSU pitcher since Ben Alsup's 1-hitter against Ole Miss in the SEC Tourney last year.