Remember that the series against Miss St. begins tonight at 6pm on Cox Sports. The Gamethread will be up later today.

LSU announced that they have sold through an allotment of 37,000 tickets for the Cowboy's Classic, the most for any regular season away game in school history. That's good news for season ticket holders, but the rest of us must now look for other sources (Oregon's allotment goes on sale June 10th)

The Men's Basketball team is on the road in Italy for a six game exhibition slate starting today at 1:30pm against Virtus Frusino. I'm not aware of anyway to see these games, but I'll update if I find anything. Coach Johnson had a brief press conference before the trip which you can see after the break.

Softball has made the NCAA field but faces a tough regional with Syracusee at Texas A&M this weekend. The games start Friday and can be seen live online for free here.

Just when you thought we might get through the offseason without talking about oversigning again, it's come back with a vengeance over the last few days. First, from seemingly nowhere, Mark Richt at UGA joined in the SEC East chorus of wagging a disapproving finger towards the West, then Petrino at Arkansas made news for some "Roster Mangagment" moves. And now we are hearing from Comish Slive that it's going to be brought up at the spring meetings in Destin in a few weeks.

Meanwhile, ESPN has seen fit to honor those do-gooders from the B1G with a cover story in the next issue.

Baseball America has moved LSU back into the list of "IN" bubble teams for the NCAA, with the caveat that if we miss the SEC tourney, we'll only get in if UGA doesn't stay above .500.

Les Miles was in LA filming commercials for ESPN earlier this week in full coach garb, ratty old shoes and all. We'll see the commercials in the fall in the runup to  College Gameday's season premier in Dallas. 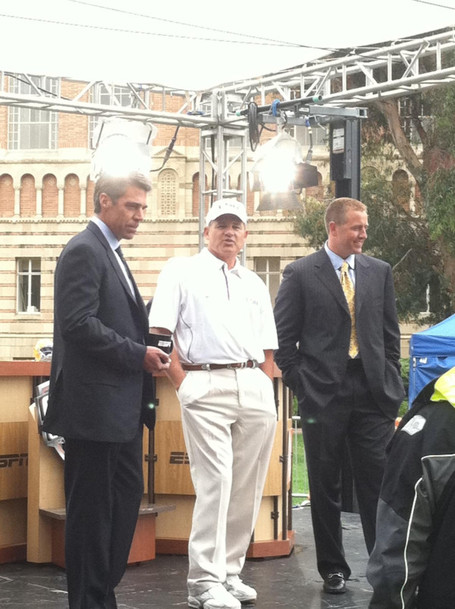 (For those of you who have been following the continuing Les Miles - Scott Van Pelt shoe saga, I have been told there will be new developments soon)

Russell Shepard has made the SEC regional cover of the vaunted Phil Steele preseason mag, out in early June.

Lafitte may in fact not be headed for the gallows, as the proposed SUNO-UNO merger has died in the legislature. Plans now call for moving UNO from the LSU system into the UL system.

The SEC has thankfully quashed any ideas of moving games to Sunday if the NFL lockout drags on. "More room for us!" says the plucky WAC.

WVU has received a "majority" of negative reaction to their plans to sell beer at football games, which EDSBS takes great offense to. Our SB Nation bros at The Smoking Musket have some of the "highlights" from the public comments.

There was a amazing piece by John Ed Bradley in SI earlier this month memorializing Beryl Shipley, the coach who integrated USL basketball years before any other program in the south did and faced tremendous obstacles in doing so.