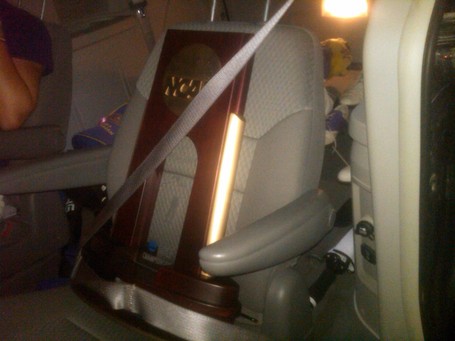 It was a banner weekend for golf as freshman Austin Ernst won the Women's Individual National Championship shooting a 6 under 66 in the final round, becoming LSU's first female golfing champion and our first individual champion since the 40's. Adding to the celebration on the greens, the women's team finished 3rd overall, the men's team qualified for Nationals next week, and David Toms won his 1st PGA tour event since 2006, too chants of LSU on the final green no less.

The career of Yvette Girouard ended on a less than high note as she was tossed in the 8th inning after arguing against one of her players being tossed for vocally disagreeing with a missed HBP call. As is customary, she then vanished on the spot, leaving only her visor behind. LSU fell 1-3 in the elimination game against Texas A&M, ending the year at 40-18 and now begins it's search to replace a legend of the game.

Last week Mahtook was named to the Dick Howser finalist list, an award for the best player in college ball. Meanwhile, Tyler Jones was named National Player of the Week by Collegiate Baseball for the 3-hit shutout against UNO and Austin Nola made the SEC Community Service team. The rest of the SEC awards and All-SEC teams will be announced today during the batting practice session in Hoover.

Speaking of Hoover, it looks like they were able to hold on to the SEC Tourney for a few more years with the combination of letting SEC officials sleep in their own beds at night and ample RV parking.

Another LSU pitcher has gotten his call to The Show, as Charlie Furbush (2007) was added to the pen in Detroit last week and notched his first victory in relief last night against Tampa Bay.

Tim Brando adds to the LSU statue discussion with a great point. If we are giving Shaq a monument, we should name the court after Dale Brown.

Oversigning isn't the only thing on the menu in Destin as Comish Slive has also announced discussions about removing the divisions from basketball and increasing player compensation. Dawg Sports wonders if we shouldn't remove the divisions in all sports, maybe even football.

This NCAA 12 preview is only saying what we are all thinking.

(full disclosure about all of the NCAA 12 links lately: EA has sponsored coverage of their college football video game on this and many SB Nation sites in the past, but is not currently. If they do in the future, I will be sure to make that clear. For now though, I just think it looks cool)

The cooperation between Miles and Mainieri in encouraging 2-sport athletes is starting to pay recruiting dividends.

I am ashamed to say I have only eaten at 4 of the 6 places on this list of great LSU area restaurants.

And because there is absolutely no real football news going on, here are some old photos of Les Miles on a boat.