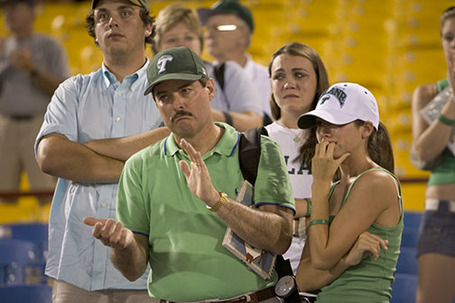 Sad Greenie: It just makes you feel good inside every time you see him.

Sorry for the lack of a weekend recap again, but due to personal time constraints, I'm going to mash the important bits from the recap into today's preview.

Apparently all it takes is to put the fear of Chesney in a team to make them motivated enough to destroy an opponent. That and playing the worst team in the conference that has exactly 1 decent pitcher. Or maybe it's the Gold Jersey Magic. Whatever the cause, LSU dominated Kentucky in ways we haven't seen since the non-conf weeks, and may have revealed a change in philosophy in the process.

I had to go through the stat sheets twice and re-read the gamethread before I believed it, but LSU, the team that is still 2nd in the league in sac bunts, did not attempt a single one all weekend. Overall, LSU appeared more aggressive at the plate, as if we just decided to play like we still had last year's bats. The offensive output was off the charts compared to what we've seen in conference play (32 hits, 29 runs, 7 doubles, 2 Homers), though the optimism should be tempered due to the lack of quality from Kentucky pitching. Other than Friday's Alex Meyer, none of them were effective at all. In fact, Kentucky seemed to be utterly broken after the second inning Friday, and constant fielding errors on routine ground balls helped pump up the figures. 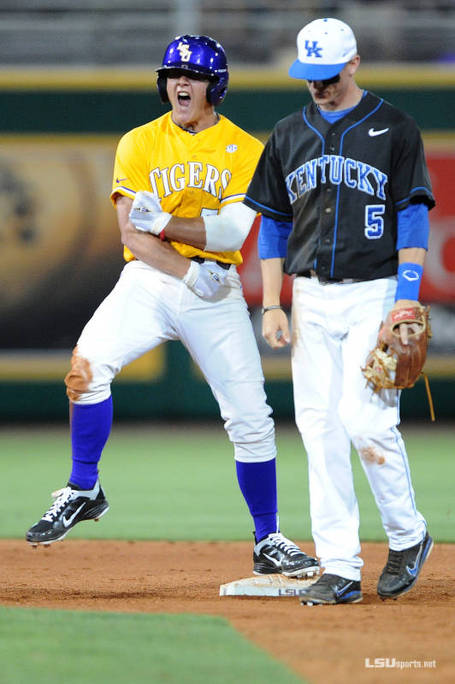 Mason Katz, however, deserves some serious praise for a legendary performance. He batted .727 (8-for-11) for the weekend with 5 doubles, a homer, and six RBI. His 3 doubles on Friday tied the LSU single game record and he had an impressive and mistake free weekend at 1B. But you need something extra to count as legendary. Katz was supposed to be sidelined for the next few weeks due to a broken hand and indeed played all weekend with a bandage or brace of some kind on his throwing hand. According to a postgame radio interview during the series, Coach Mainieri says there is actually a bone chip floating in his hand, but he's either not feeling it or masking the pain very well. There appears to some concern about his arm strength or maybe worries about it being re-injured, so he'll likely stay at 1B for the time being, but that is the sort of inspiration you look for when you need to go on a long winning streak.

The sweep was what we needed to stay alive on the road to Hoover, and thanks to Auburn getting swept at S Car and Miss. St. dropping 2 of 3 at home to an inspired Bama team, LSU now sits just 2 games out of the all important 8 spot. It's still a long way to go to recover from the worst conference start since before Bertman, but we are moving full speed ahead. An NCAA post-season bid is not off the table yet.

Keeping the hope of that NCAA bid alive also means taking care of the last serious non-conference threat, The Greenies. Since we last saw them, things have been up an down for the wave (26-18, 6-9 in CUSA), winning conference series against UCF and UAB and completing a 2 of 3 series win against SELA, but then getting run-ruled at Rice and dropping a very oddly timed non-conf series against Utah of all teams. The Greenies bullpen is still hampered by injury, but they have faith in Wade Konvicka, who is coming off a complete game last mid-week vs. Jackson State. Also, despite what seemed to be a serious shoulder injury he suffered during our last meeting, closer Nick Pepitone recovered well enough to record 2 saves against UAB last weekend and, as is always the case for both teams in this series, all arms are available.

This is the oldest and longest running series in all of LSU sports, predating even the football rivalry by a few months, but both schools do not list the same figures. LSU states the all-time record at 163-125-3, while the Greenies give us credit for 9 more wins at 172-125-3 and marking this as the 301st game in the series. Somebody's got the wrong numbers and while I appreciate their generosity, I'm sure we'd all much rather enjoy them being wrong about a statistic.

Weather: A front is making it's way through the state today, but the hope is that it clears for gametime. Unlike the Greenies, we have mastered the sacred and mystical art of "field drainage", and have no need for that blasphemous carpet that they play on in Turchin.

TV: Ah, the comfort zone of LSU Baseball on TV at it's best. Cox Sports with Rollins and McDonald in the booth and Rantz stealing that guy's seat behind home plate.