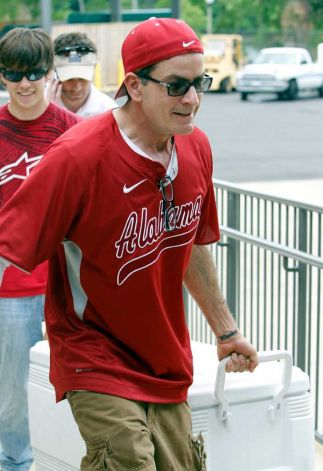 The streak is alive at 5 wins and things are clicking for the TIgers on offense better than they have all of conference play, but now is the time to see who really has the TIGERBLOOD in their veins and who wants to keep #WINNING

(This concludes the required Charlie Sheen jokes. In all seriousness, the dude is doing awesome things to help out the people of Alabama and that should be commended)

For Alabama (28-19, 10-11 in SEC) the season started off well in SEC play before running into the juggernaut that is Vandy. They were swept by the Dores and also lost the next 2 series against Tennessee and Florida before rebounding win an inspired series win at Mississippi just days after the tornadoes hit. With the division lead up for grabs in an extremely tight SECW race, Bama can ill afford to fall behind the pack.

LSU will unfortunately have to play spoiler at a time when the folks in Tuscaloosa really need things to start going their way again. Admission to all 3 games is free with a donation to the Red Cross and various local restaurants will be feeding those now living in shelters behind the right field wall. It hopes to be an uplifting weekend, but when you are only 2 games out of a Hoover spot, someone has to be the bad guy.

Weather: Clear to partly cloudy without a hint of rain, high in the low 80's all weekend

TV: Due to a time change on the Saturday game, Cox Sports will not be carrying Game 2 of the series. However Cox 4 will carry the entire series live in the BR, NOLA, and Laf markets. For those outside of LA, Friday and Sunday will be on Jumbo Sports affiliates and Saturday will be on most CSS stations and on ESPN3.com in most markets.

In a western division where things are so close, the rooting interests are simple. Root East over West and hope for sweeps. If LSU can take care of it's own business, we could rocket all the way up to a tie for 2nd place in the division.

The rest of the National slate this weekend is just more conference play, with the exception of #9 TCU travelling to #22 Okie State. The 1st bid to the NCAA tourney will be decided as Princeton, who we took 2 of 3 from earlier this year, will play Dartmouth for the Ivy League title and auto-bid. Also, keep an eye on the Dallas Baptist @ #11 TAMU series, as DBU has several midweek win against many of the best teams in Texas.