Weekend Series Recap - Alabama: It Was All Going So Well...

Share All sharing options for: Weekend Series Recap - Alabama: It Was All Going So Well...

Road Series, so no Pictures or Video Highlights.

It was as if the team that went to Vandy had just gotten lost on the road back home and some great impersonators found a bunch of gold jerseys and decided to fill in for the week. The team that used an amazing Friday comeback to fuel a dominating sweep of Kentucky vanished on Saturday afternoon in what should have been a crippling blow to our shot at a post season. However, thanks to the jumble that is the SEC West this year, our season still hangs on by the slimmest of threads.

Friday could not have started off any better. 4 runs on 5 hits had quickly chased away Bama's  Kilcrease and a succession of Bama relief wasn't able to stop the bleeding. LSU racked up 10 runs on 14 hits, almost matching the highest offensive output we've had in SEC play. Kurt McCune was decent on the mound, giving up 10 hits but for the most part managing to work his way out of any real trouble until the 8th, where he gave up 4 straight hits which combined with a throwing error to score 3 runs and cut the lead in half. Kevin Berry came in to lock it down, and with the exception of one more run that was really the fault of some questionable outfield play, had a great closing performance in the 10-6 victory. On a night when only Mikie Mahtook failed to get a hit or score a run, It seemed the streak was real and LSU would cruise into Hoover.

That is not what happened the rest of the weekend. Due to my own travel issues, I only caught the last 2 innings of Saturday on the radio, but the box score paints the horror story well enough. After a shaky 1st where Bama scored 2 runs on 3 hits and throwing errors by Tyler Hanover and Austin Nola, Kevin Gausman had a career performance, notching 10Ks in 7 innings and would allow only 1 more run. But the total lack of run support made it all for naught. 4 Tigers had no hits or runs and were spaced just so in the lineup that LSU could never get anything going. Bama's starter Morgan only recorded 5Ks and gave up 8 hits in his 8.0 IP, but it was enough to keep LSU of the board in the 4-0 shutout.

Sunday was just more of the same. Bama's Smart, their ace closer who had only thrown 5 pitches to end the game Saturday, got the nod in what was expected to be a short appearance. The thought going in was that he might pitch just an inning or 2 and a succession of Bama arms, including Kilcrease on short rest, would make appearances. Thanks to LSU's continued silence at the plate, Smart went for 8.1 IP giving up 8 hits and only throwing 5Ks. Only Trey Watkins and Mason Katz went hitless in this one, but again, no one seemed to be hitting at the same time. Smart faced the minimum 4 times. Meanwhile, a bad day for LSU pitching, starting with a nightmare outing for Ben Alsup, put the game well out of reach early. Some bad fielding (though none of it ruled an error) assisted Bama in notching 2 in the 1st, then a bad decision blew the doors open in the 2nd. With 2 on, LSU elected to walk Reaves, who had homered on Friday, to load the bases for Smith, a DH who had not been hitting well. Smith homered on the 1st pitch and you could almost feel the floor drop out from underneath the team. A succession of Broussard, Rumbelow, Eades, and Ott stopped things from getting too out of hand, but Bama was just cruising to the 9-0 victory and their 1st series win over LSU since 2005.

After all the progress we seemed to be making the last few weeks, this team has reverted right back to where we started. An utter lack of run support is dooming good pitching performances and the bad ones just get magnified. LSU didn't score a run after the 5th on Friday and, what's worse, is starting to regress on defense. Hanover, Nola, and Watkins all had difficulty and even the normally brilliant Mahtook whiffed on a dive ball or two that he would normally make. You can feel the season slipping away at every at-bat and I'm not sure what can be done at this point. 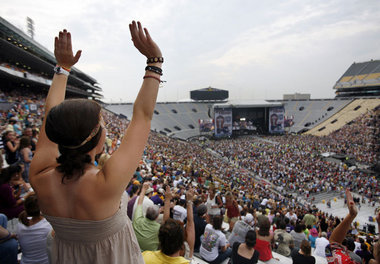 We are not in Hoover, but thanks to not getting swept and an odd weekend in the SEC, we have moved away from the good seats at the Superfest. The SEC West is in complete chaos, with no team having locked down even a spot in the Tourney yet. With 6 games left, even LSU still has a shot at the division crown as leaders Arkansas and Alabama are only 4 games ahead. Of more concern is the 3-way log jam for 2nd in the West. Auburn, Ole Miss, and Miss St. are all tied 3 games ahead of us at 11-13 and the Baseball Egg Bowl is next weekend so one of those two is going to have at least 2 losses. A sweep against Tennessee next weekend is required to keep us alive.

SAC BUNTS: 46 (T-2ND IN THE SEC, NONE ATTEMPTED AGAIN THIS WEEKEND)