Share All sharing options for: NCAA Conference Re-draft Round Two

If you've been following the SBNation conference re-draft, you know already that LSU was Red Cup Rebellion's first round selection.  We're incredibly honored to be the founding school of this new conference, especially because it required Ole Miss bloggers to admit how great LSU is.


But turnabout is fair play, and now we send Billy Cannon to the podium to announce our second pick, the seventh pick overall: 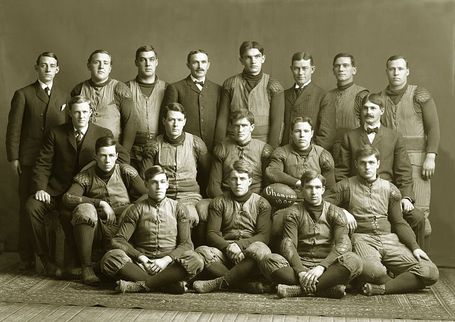 Let's start with the niceties.  Michigan is the all-time winningnest program in college football history.  They have 11 National Titles.  They don't call them the Victors for nothing.  Yeah, they've hit a bit of a rough patch the last few years, but does anyone honestly believe this is a permanent decline?  Everyone's entitled to a losing season once or twice every few decades.

Michigan's also a well-rounded athletics program, something that we value highly.  Michigan has won 33 national titles in all sports other than football, good for tenth all-time.  They are a powerhouse in swimming and ice hockey, and they are one of the rare schools which have won a national title in football, basketball, and baseball.  Throw in hockey, and Michigan has a title in each of the four major American team sports.

On top of their athletic prowess, Michigan boasts a sterling academic reputation.  Michigan's alumni include 26 Rhodes Scholars, 7 Nobel Prize winners, 18 Pulitzer Prize winners, the entire crew of Apollo 15, and one United States President.  Michigan has long enjoyed the reputation as a "public Ivy" and it also boasts one of the largest endowments in the country.  Also, to tie it in into LSU, Michigan also is a land, sea, and space grant university.  Michigan's not just good at sports, they are smart and rich.

Even better, Michigan and LSU would finally play each other in football.  In the new conference, it is not hard to imagine this becoming an epic rivalry just because the two schools and fan bases are so different.  You think we hate those pretentious wankers now?  Just wait until we play a few football games.  They think we're a barely literate, unruly mob now?  Just wait to the first tailgate.  This is going to be awesome.

Just getting y'all prepared.  You'll hear a lot of that.  Michigan brings everything to the table: prestige, great football, a huge fanbase, great academics, well-rounded athletics in all sports, and most importantly, someone we can hate with every fiber of our beings.

PodKATT: For those wondering, here are the rest of the 1st and 2nd round picks. From here to the end, picks will be made as soon as the commissioner who is up is ready. We'll update the progress whenever the currently-unnamed Red Cup Conference makes it's picks.