Day Games and Parking Hell - A Preview of 2011 LSU Tailgating

Share All sharing options for: Day Games and Parking Hell - A Preview of 2011 LSU Tailgating

As always, The Man (whether he's a programing director at a network or our own beloved university) is trying to harsh on the mellow of our tailgating utopia. Some say it is the perfect society, where the only currency needed is an open ice chest and room on the grill. Where our enemies are cursed by even the children, then buried in the bounty of our deep fryers for their trouble (or in the case of Ole Miss fans, just tossed straight into the fryer). It is a wild world to be sure, but it's one that thrives on the slow burn. It is this day-long marination of the Tiger faithful that produces the wildness of Saturday Night, the force that shakes The Valley.

But alas, utopia, it seems, is not meant to exist this season. Beset on all sides by interests that are not of the tailgating public, the hollowed grounds will be not be the place of the full day revelry we have come to love. The JP Devil has come to collect his due.

Thanks to the Kickoff matchup with Oregon, the home slate is already damaged, bringing the total down to 6 games. A confluence of scheduling means the home slate is also without a marquee OOC. Thankfully, the 2 OOC games we do have rank so far down the scale that they are both guaranteed night starts. The Demons from Natchitoches are certainly a TigerVision affair, while WKU has been tagged as this year's homecoming game, probably calling for an FSN broadcast. Both days will provide for near perfect tailgates, though campus never seems to fill out like it should for these games. Homecoming will certainly be a cozy November afternoon, but due to the complete lack of a September slate we should have a packed house and lawn for the home opener.

After seceding the Friday after Thanksgiving to the Iron Bowl for 2 years, LSU-Arkansas is back in the Tryptophan Classic spot, and has been confirmed for a 1:30pm start. The only way we see Saturday Friday Night in the home finale will be a multiple overtime thriller (which I am certainly not opposed to)

Now for the really bad news. With the exception of the emergency early start for the Appalachian St. game, LSU has not started a home game before noon since 2006. That streak will almost certainly be broken with the SEC home opener against Kentucky. October 1st is the weekend of CBS's primetime doubleheader and any SEC-SEC games that they do not select will have to be played in one of the 2 JP/LF/Raycom 11:30 am windows. With FloraBama and the 2010 SEC title game rematch both likely to be picked ahead of us, we'll have no choice but to burn alive under the early October sun.

It doesn't really improve from there. The home matches against Florida have normally been the choice of CBS, but with the only nighttime CBS kick being used the previous weekend, they will be doing only an afternoon game that weekend. The other SEC-SEC matchups CBS has to chose from may give us a chance to fall to an ESPN night game though.

UGA-Tenn, if their seasons are panning out, may be CBS's choice. Even AUB-ARK is enticing. But if both Title contender LSU and under new management UF are on a roll, CBS will be certain to pick it up for a 2:30 start.

The last wildcard is Auburn, and this time CBS will really have no other choice.

The other SEC-SEC games don't jump out as the Game of the Week material, even if Auburn is way down this year.

EDIT: Shame on me for forgetting the 3rd Saturday in October. While it's no guarantee we get passed over by CBS, it certainly gives us a much better chance than I originally believe. It's at least the best chance for a night game of all of our SEC home games.

So there you have it. LSU may not have a single SEC home game at night for the 2nd year in a row. Tailgating wont be a bust, but it certainly wont be the stuff of legend that a year of this potential deserves.

And that's not even the worst part of it.... 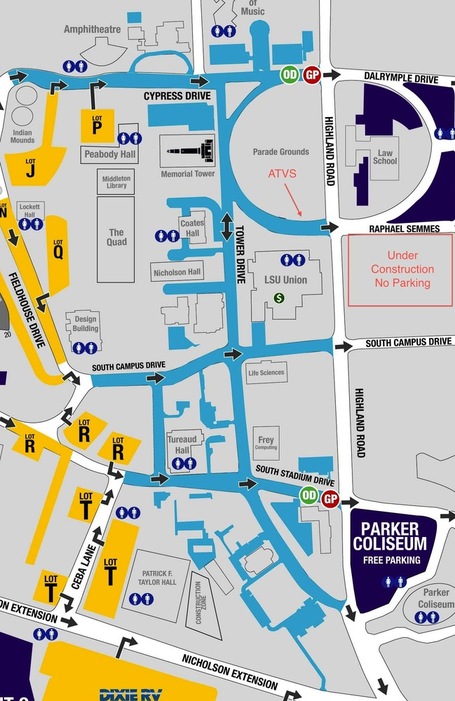 The other reason for tailgating problems next year is the onerous new parking regulations. First, lets get the good news out of the way. LSU has backed off of their original plans to charge $20 for parking in the big lots on the west side of campus. If you park in The Hayfield, the Levee Lots, or the Old Front 9 nothing has changed. If you park or tailgate on the east side of campus, however, there are BIG changes that you are going to want to start planning for now, especially if you have a large crewe.

(It should go without saying, but just to be clear: If you have season passes for any of the reserved lots in the heart of campus, none of the below applies to you. My only warning to those folks is to find a route to your spot that doesn't use Highland road, because it will likely be heavily congested much earlier than usual)

Parking in any of the areas marked in blue on the map above will now cost $40 dollars per game ($50 for trailers). To park in those areas you will need to buy a decal. There are 2 kinds of decals, both with the same cost, that are designed for the 2 major types of tailgaters. If you're the kind who wants to park Friday night and don't even think about moving until after the traffic clears on Saturday night, as I normally do, you'll have to buy an "OD" decal. The OD will allow you to park overnight in the blue areas above and keep your vehicle (or trailer) parked there for the duration. In my opinion this is the optimal solution for trailers or that one guy in your group who drives a van that holds everything. The OD decals can be purchased at varying locations around campus starting in the afternoon friday and lasting through the early morning Saturday. OD sales start at the Alex Box box office at noon on Friday, then moves to the Visitor Center on Dalrymple Drive and Public Safety Building on South Stadium Drive at 6pm. From 10pm to 4am they will only be sold at the Public Safety Building. Note that with the OD decal, if you leave the blue area after the area becomes restricted access at 4am Saturday, you will not be allowed to re-enter unless you purchase the other decal.

If you are the kind who packs up your truck and comes in Saturday morning, you are going to need the "GP" decal. The GP (also $40, $50 for trailers) allows for entry into the blue area after restricted access begins at 4am. The GP decal can only be purchased (in Cash Only) on the day of the game as you are entering the blue area. You will only be allowed to enter the blue area from access gates on either Dalrymple on the north side or South Stadium to the south. Again, it is the only one of the 2 decals that allows entry after 4am. Sales will stop if LSU determines the area is full.

For those working on your plan of attack, there is an important restriction to remember. Before 4am, including all night Friday, anyone is allowed into the blue area to drop off trailers, vehicles, and equipment. After 4am, no one gets inside the blue area without a GP decal. That includes getting in to drop off items. Also, all decals are one time use only. They will have to be re-purchased for every home game.

If I've left you confused you can try reading the rules your self at LSU's parking page. They've also got a handy map of all of campus that's clearly marked.

Many of you are now racking your brain thinking of the closest free parking area to your tailgate, especially if you are a Parade Ground denizen. What I have added to the map above is important to your plans. If you've been to campus in the last few months you are no doubt aware of the construction on the Southeast corner of Highland and Raphael Semmes. The area including all of the free parking lots behind the old president's house and the north side of the horseshoe dorms along the south side of Raphael Semmes are gone, reduced to rubble for the new construction (where they are building, you guessed it, a parking garage.) The free parking around the Law School is now going to be highly coveted and will certainly affect those of you who normally park/tailgate in that area (like you, LSUJOSHUA)

My suggestions for how to deal with this (besides grabbing your torch and pitchforks and marching on the AD's office) is the same as it is for anyone who would be tailgating for the first time: Get there earlier than you normally would and be respectful of your fellow tailgater. Anyone who's dealt with the ever-shifting post-game exit plans knows that LSU's track record in this area over the past few years has been spotty at best. Things will go wrong. There will be unexpected gridlock. Putting the access choke points right on Highland can do nothing but slow down the already snail-like pace experienced on that road. Those who chose to not play along with the new plans (and based on early reaction, it could be a lot of people) are going to find new spots to park and tailgate, and it's not like those spots will have been vacant in the past. Just remember the enemy is in the AD's office and on the east sideline, not the guy next to you with the deep fryer. Just be civil and hopefully we'll all get through this nonsense together.