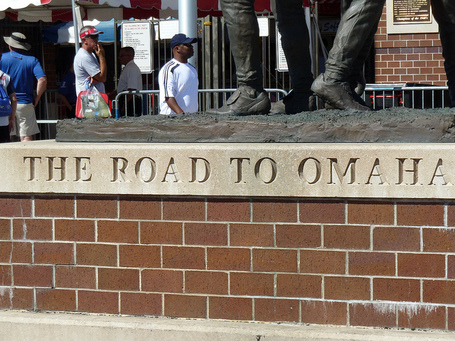 Even though LSU didn't make it, some of you will still be watching the NCAA tournament. With more than 300 D-1 teams, and no one from Louisiana in the field, it can be hard to drum up interest in the Jacksonville's and San Francisco's of the world. ATVS is here to help, giving you reasons (not all of them rational) to root for and against most of the 64 team field. Games on TV are marked where they are known. Other sites are usually available to view for free through the NCAA's Uberbracket which you can see here.

Root For: My SEC heart says the Cowbells, but I've always liked the Golden Eagles in general (their ties to His Favreness notwithstanding.)

Root Against: As a nod to the other Dawgs we know, the Wreck from Tech deserves to take a fall.

PodKATT's Pick: Rooting ain't the same as picking. USM and State are both inconsistent enough to surprise in this regional, but I think the Bees take it easily at home.

Root For: Princeton, for being the 1st (of many) teams to beat us this season. The Ivy champs have had almost a month off since winning their league crown.

Root Against: Because a Top 8 National Seed with only 13 HRs as a team is an affront to all we hold dear in the sport, and because of Augie F'ing Garrido, Texas deserves the hate of a thousand suns.

PodKATT's Pick: At home? With that cakewalk of a draw? Horns by a mile. They won't even break a sweat.

Root For: Maine didn't play a home game until the 19th of April due to snow, which is fairly impressive. James Madison had nearly 100 runs in it's first weekend series, which is hilarious. Either is a great choice.

Root Against: FIU, for faceplanting in the Sun Belt Champ game and taking away an at-large spot we could have used.

PodKATT's Pick: Unless JMU uses last year's bats again, should be an easy one for UNC.

Root For: Navy, though rooting for a sea-battle playoff with the ECU Pirates would be entertaining.

Root Against: St. John's AD Chris Monasch is on the NCAA Baseball Tournament Selection Committee and most don't think the Johnnies should be in the field. A quick and embarrassing exit is the only justice I'll find.

PodKATT's Pick: UVA might have the best pitcher in the country, and the rest of the team ain't half bad. I'll take the Cavs, but watch out for ECU.

Root For: Sacred Heart, who did not beat us, but did get the Patriot League title berth.

Root Against: The Pseudo-Tigers of Clemson, who probably play at a field called Blex Aox.

PodKATT's Pick: UPSET SPECIAL The Chanticleers of Coastal Car. are a notoriously underrated program on the rise. If they get past UConn (and I think they do) they have the best shot of knocking out a host so far.

Root For: Seton Hall, for these wicked awesome jerseys alone 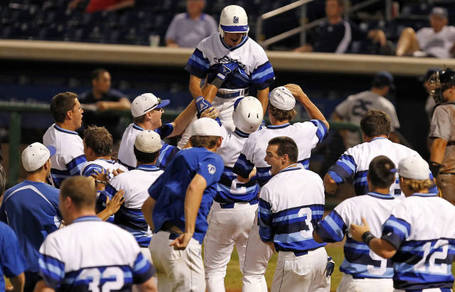 Root Against: A&M, for failing to have the stones to jump conferences last summer.

PodKATT's Pick: Aggies get this one easily at home.

Root For: S Car if you are a strict conference loyalist, but the Stetson Hatters (Yes, the cowboy hat. No, they're from Florida) have the best mascot in this field.

Root Against: Hard to drum up dislike in this regional. I've got no feeling either way about UGASo, and I don't root against the Wolfpack because of Bo Rein.

PodKATT's Pick: Stetson was almost a host themselves before collapsing down the stretch. They will be a hard out, but S Car takes care of business.

Root For: Loyalists take UGA, but Tiger baseball fans are Creighton fans because of our love of Omaha. I'm pulling for the Jay's to make it back home for the 1st CWS in the new digs.

Root Against: UA-LR, for taking advantage of FIU's faceplant in the Sun Belt Title game and taking away an at-large spot.

PodKATT's Pick: It feels like OSU is hosting just for geographic balance reasons. UGA backing their way in does not bode well for their hopes. I'm taking Creighton.

Root For: Regular readers of the weekend recaps will recognize my inde favorite of the season in the Dallas Baptist Patriots.

Root Against: TCU, for being the only baseball fan base in Texas more annoying than UT.

PodKATT's Pick: Oklahoma is a tough out, but I'll take the Frawgs in a close one.

Root For: As long as Garrido or Gillespie isn't coaching them, Fullerton's all right by me. Plus we swept'em, which is about the only real highlight from the 2011 season.

Root Against: Stanford (because Kyle Peterson is calling the game.)

PodKATT's Pick: Fullerton in what should be an easy one. Watch this one just to get a look at Fullerton's nice facility.

Root For: Loyalist go for the GATAHS, but I'll take the place that molded Bertman and root for DA U.

Root Against: Jacksonville. Since when does the ASun get 2 bids?

Root For: Alcorn St. for being the 3rd conference champ we walloped this year.

Root Against: Baylor is another team who you question being in the tourney, but with a parent who's a Cougar grad I'm bound by blood to root against the Owls.

PodKATT's Pick: Rice should take this one easy.

Root For: Yes, that park has no business hosting a t-ball game, much less a Regional, but the team is more than worthy and their fans are nothing but friendly, polite people. I highly recommend heading over to Bruins Nation for some great coverage and active gamethreads. These guys and Dallas Baptist are my non-SEC rooting favorites.

Root Against: For the following

and numerous other crimes against the game of baseball and the State of Louisiana, Gillespie and his Eaters should be shot into the sun at the earliest convenience.

PodKATT's Pick: UCLA doesn't seem to be as good as last year's squad, and both Fresno and UC-I are going to be trouble. My heart says UCLA, but my head thinks Gillespie is just going to piss me off again.

Root For: Vandy, mainly because I find no compelling reason to root for the others, and the crew over at Anchor of Gold are nice enough folks.

Root Against: Troy, for not having the decency to make it to the Sun Belt Title game and causing the loss of an at-large spot we could have used.

Root For: Bama, of course.

Root Against: You'd think FSU, but UCF really is the most annoying of the small D-1 teams in Florida.

Root For: The Hogs, because getting shipped to Tempe in the heat of summer is brutally unfair.

Root Against: Arizona State, the most prolific cheater in the history of the NCAA, would not even be in the tournament if COI could get it's act together and rule on their appeal of their current sanctions. Yes, this team is currently under penalty, and the NCAA selected them to host anyway.